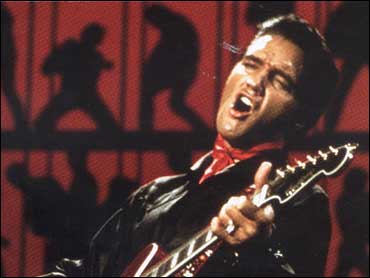 When Elvis Presley made his TV special in 1968, he was coming off a string of forgettable films and a long dry spell on the charts, and the rock 'n' roll music he'd helped pioneer had given way to the Beatles and Jimi Hendrix.

It was a tough time for a comeback, but Presley, looking fit and tan in black leather, pulled it off with one of his best performances ever.

"You can argue that it was the highlight of his career. He had been treading water for eight or 10 years," said Alan Stoker, a historian at the Country Music Hall of Fame, where Presley has been a member since 1998.

The 40th anniversary of what's known among Elvis aficionados as "The '68 Special" is getting attention as fans gather in Memphis this week to mark the anniversary of the singer's death from heart disease and drug abuse on Aug. 16, 1977.

Presley's Graceland mansion has opened an exhibit dedicated to the program, and Steve Binder, the TV show's producer-director, has published a book, "'68 at 40: Retrospective."

"He said he was fearful of doing television, because aside from the 'Ed Sullivan' exposure, television had been a fiasco for him," Binder said in an interview. "He said, 'Television is not my turf. I'm not comfortable in a television studio.' I said, 'Why don't you make a record and I'll put pictures to it.'"

The original idea, the one Elvis' manager, Col. Tom Parker, had in mind, was a Christmas special with Presley singing holiday favorites.

But Binder wanted Presley doing his own songs and doing them alone instead of with guest stars - a departure from Christmas specials of the day.

The real breakthrough, though, was offsetting the big-production numbers with a loose, in-the-round performance - raw and unscripted - before a small audience.

"We'd start shooting at 9 or 10 in the morning and go until we were done, then he'd go into his living quarters and invite friends and they'd jam to all hours of the morning," Binder recalled. "I was amazed by all the energy, enthusiasm and fun going on after a hard day's work. And it was like looking through a keyhole at things you were not supposed to see. I thought, 'This is better than what's going on on-stage with the pre-planned numbers.'"

Parker hated the idea, but Binder persisted until Parker allowed him to recreate the backstage jam session for the camera, bringing in Presley's longtime guitarist Scotty Moore and drummer D.J. Fontana and other friends to help make him comfortable (it had been seven years since Presley last did a live concert).

"There was no plan at all. I mean absolutely nothing," Moore recalled. "He didn't know what he was going to do. I knew he was going to pull out some of the old songs we'd done, that kind of thing. But that was it."

Only part of the improvisational footage appeared in the TV special (RCA released a full uncut version later), but it was the highlight. At 33, Presley was handsome and in fine form, telling stories and joking with the musicians.

At first, he seemed nervous. "This is supposed to be the informal part of the show where we faint or do whatever we want to do, especially me," he cracked before his first number, "That's All Right."

But by "Blue Suede Shoes" he was in control, swapping his acoustic guitar for Moore's electric and stomping his feet through bluesman Jimmy Reed's "Baby What You Want Me to Do."

Moore said Presley knew what was at stake.

"Because he hadn't been touring - he had gotten into the movie thing - I know his feeling was 'I'm getting back before the public this way,'" he said.

The show started a golden era for Presley that included his hits "Suspicious Minds," "In the Ghetto" and "Kentucky Rain," as well as a run of successful Las Vegas concerts and a January 1973 TV special, "Aloha From Hawaii," his last big artistic statement.

By the mid-'70s Presley had become a caricature of himself. But that night in '68, he was a young man fighting to re-establish himself.

"I think it was the honesty," Binder said of the show's success, "the fact that he wasn't controlled, wasn't reading prepared lines. It was raw and it was powerful, and I think it was who he really was."