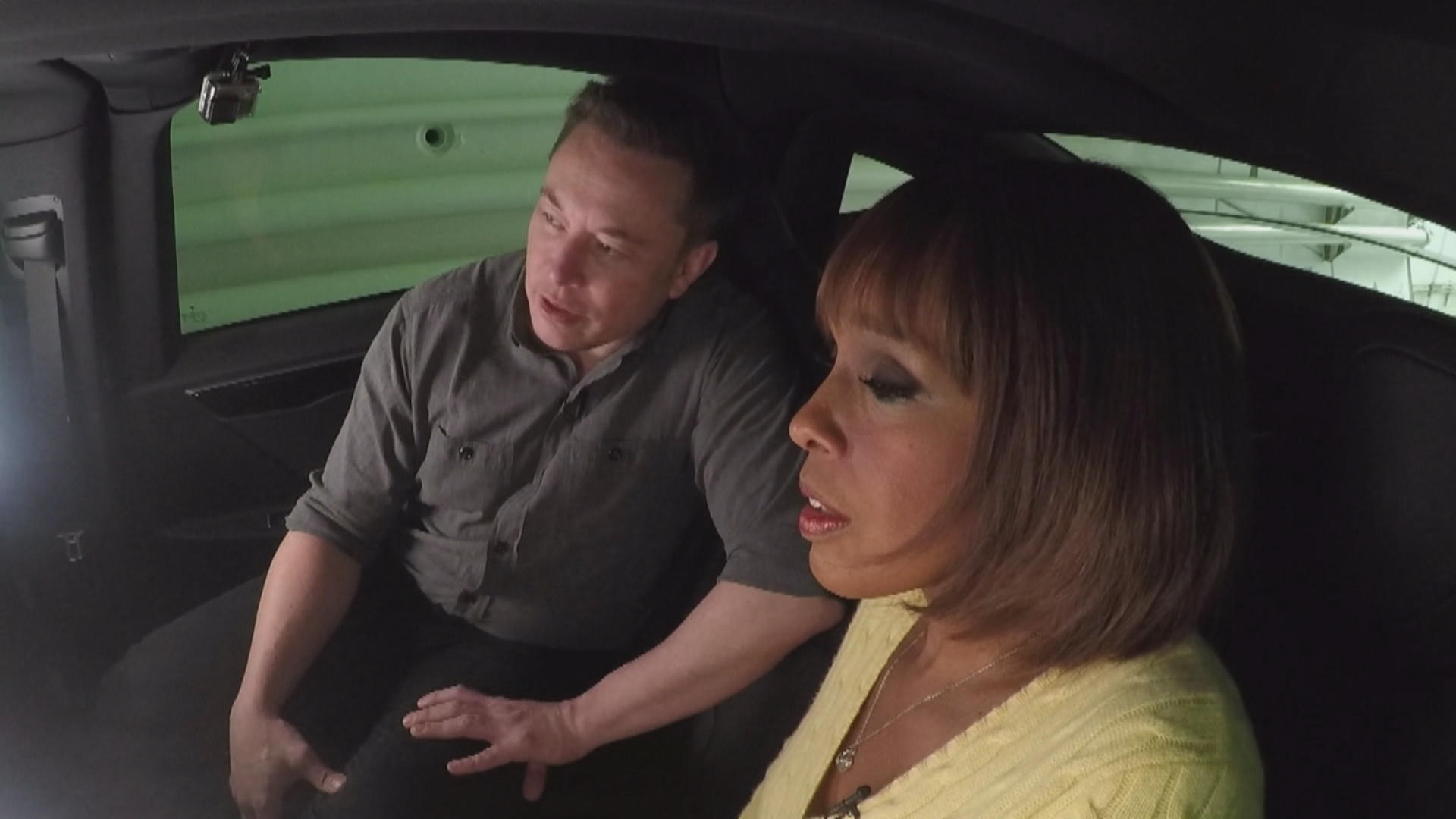 From electric cars to spacecraft, tech titan Elon Musk is widely known as an industry disrupter, and as of Wednesday, he's officially in the tunnel business.

Tuesday night in Los Angeles, Musk unveiled the very first tunnel in what he hopes will become a network of underground highways. The first tunnel runs between the headquarters of Musk's SpaceX company and a parking lot behind a shuttered business a little over a mile away. It's only for testing purposes and won't be used by the public.

As "CBS This Morning" co-host Gayle King found out, it's not just any tunnel. It's Elon Musk's tunnel. But to understand why he embarked on the project in the first place, you need to go back a couple of years to when he decided he'd had enough of Los Angeles traffic gridlock.

"Either we try something new or we will be stuck in traffic hell for the rest of our lives…I started thinking, well, maybe this could be underground," Musk said.

This is the underground network he envisions: electric cars using street level elevators to drop down into a series of tunnels.  Autonomous technology in the cars ensure they don't run into each other, despite going speeds over 25 mph.

"Tunnels are in my view the only solution to open congestion. Because we have a 2D road network and we have buildings in 3D…like, and everyone wants to pile out of those buildings and into those buildings at the same time, obviously you're going to have a traffic jam," Musk said.

No one was building such a system, so Musk formed the amusingly named Boring Company and started building it himself. He hired Steve Davis, an engineer from his own SpaceX, to be the company's new president.

When Musk came to Davis and told him about the idea, he said, "go dig a hole." Neither had any experience in building tunnels. But in true Elon Musk fashion, that didn't stop him.

"Learn it from scratch! So probably, the first day, you won't be the best at it. But then, you'll – you'll get better," Davis recalled Musk telling him.

About a year ago, that company started digging what has become today's 1.2 mile long test tunnel in Hawthorne, near Los Angeles

"Unless we can make tunnel digging at least 10 times cheaper, then digging tunnels will not be an effective means of alleviating traffic. It'll just cost too much," Musk said.

Musk's vision depends on him being able to do it all faster and cheaper than current industry standards. While modern subway tunnels in Los Angeles cost around $900 million per mile, he says he built his for about $10 million. One way he saved money: he literally made it dirt-cheap.

"When digging tunnels…it's quite expensive to have all this dirt trucked off somewhere. And we're like, well, why don't we try to use that dirt for something useful? So we are creating bricks on-site…and you can pick 'em up for, they're very cheap; 10 cents a brick," he said.

But speeding up the process was also a cause for concern. The city of Hawthorne granted Musk an exemption from typical environmental impact reviews required under California law and in nearby neighborhoods where the tunnel runs, some residents told us they never heard about the project until it was almost finished.

"We actually sent letters to everyone, I think there's normally like a radius that you have to inform people. We doubled that radius and informed people," he said. "I think in any situation, there's gonna be a few percentage of people that grumble."

There was also grumbling from another area – the wealthier Los Angeles neighborhood of Brentwood, which is nearby Musk's proposed second test tunnel along busy Sepulveda Boulevard. Community groups sued the city of Los Angeles for also granting an environmental review waiver there. In August, Musk announced he was no longer building that tunnel.

"There's some, like, retired lawyers in Brentwood that all they do is sue, like, literally…they just automatically sue. It's like a hobby," Musk said. "We decided another test tunnel wasn't really needed."

But Musk said he's "not fazed by lawsuits."

At first glance, the tunnel is a bit daunting. At only 12 feet in diameter, it's much more claustrophobic than most transportation tunnels. According to Musk, cars will be able to travel up to 150 mph in the tunnel but must be on autopilot.

"Because the autopilot has radar and cameras that will automatically slow you down before you impact another car…you would only be allowed to go through the tunnel on autopilot," Musk said.

By the end of their four-minute adventure, King was able to relax a bit and by the time they started up the elevator that returned them to the surface, she began to see how this proof-of-concept tunnel which really doesn't go anywhere could actually be a preview of the world to come.

"At this point I'm confident this can revolutionize cities and get rid of soul-destroying traffic," Musk said.

California is an earthquake-prone area, but for anyone worried about quakes and a tunnel collapse, Musk has an answer for that, too. He explained that earthquakes really do all of their damage on the surface, not underground.

He said they're like waves hitting a boat floating on top of the ocean and that you'd rather be in a submarine deep underwater if there's a big storm. He also pointed out that historically, people who are in subway tunnels during earthquakes escape serious injuries, like the 1968 Mexico City quake when zero people died in their subway tunnels.