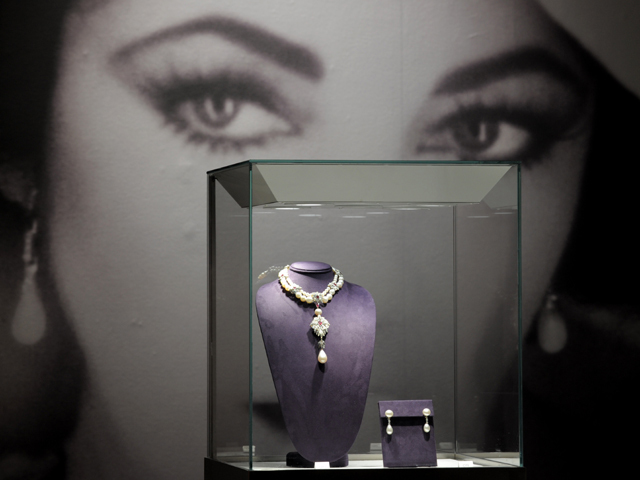 (CBS/AP) NEW YORK - Elizabeth Taylor's jewelry collection sold for a record-setting $115 million - including more than $11.8 million for a pearl necklace and more than $8.8 million for a 33.19 carat diamond ring given to her by Richard Burton - at a Christie's auction Tuesday night of memorabilia amassed by the late actress.

The pearl, diamond and ruby necklace, known as "La Peregrina," reached the world record price of $11,842,500. It was estimated to sell for $2 million to $3 million. The price surpassed the previous auction record for a pearl, set in 2007 at Christie's auction house in New York City with the sale of The Baroda Pearls for $7,096,000.

The 33.19-carat diamond ring given to Taylor by the actor she married twice, sold for $8,818,500. The ring, estimated to sell for $2.5 million to $3.5 million, was included in a collection of Taylor's necklaces, earrings, pendants and rings and other gems that went on sale Tuesday night at Christie's in New York. The ring was purchased by a private buyer from Asia, according to a Christie's spokesman.

Taylor, a screen goddess who also starred in classics such as "Giant," "Who's Afraid of Virginia Woolf?" and "Cat on a Hot Tin Roof," died in Los Angeles in March at age 79. A jewelry lover, she had pieces from some of the most famous names in the jewelry world, including Cartier, Van Cleef & Arpels and Chopard, in her collection.

Taylor's array of necklaces, earrings, pendants and rings and other gems went on sale Tuesday night in New York. The entire jewelry collection was originally expected to fetch $30 million.

Among the other high-profile items was a diamond bracelet given to the "National Velvet" and "Cleopatra" actress by singer Michael Jackson, with an estimated sale price of $30,000 to $50,000. It sold for $194,500. All prices include the buyer's premium.

Other sales of Taylor's art, clothing and memorabilia will be held later in the week. Part of the proceeds will go to The Elizabeth Taylor AIDS Foundation, which she established in 1991 to help people living with AIDS.

Taylor's collection of impressionist and modern art is scheduled to go on sale at Christie's in London in February.