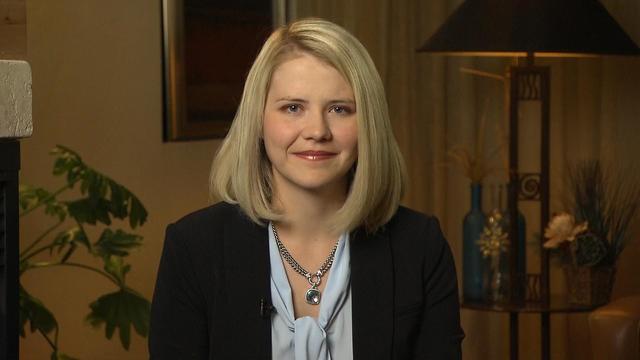 One of the few people who would ever be able to understand what kidnapping victim Jayme Closs is going through right now, after spending the last three months in captivity, is Elizabeth Smart, who in 2002 at the age of 14 was kidnapped from her home in Salt Lake City, Utah. Smart was held captive by a married couple in their home for nine months before being rescued.

Now a child safety activist, Smart talked with "CBS This Morning" on Monday about what Closs may be experiencing as she is reunited with her family after escaping to safety on Thursday.

Smart offered some advice that her own mother gave her when her abduction ordeal had ended: "My mother told me after I returned that what these people had done was terrible, and there weren't words strong enough to describe how wicked and evil they are. They had stolen nine months of my life that I would never get back. But the best punishment I could give them was to be happy, was to move forward.

"I think in Jayme's case, the same is true. She will not be able to go back to who she was before she was kidnapped. She will never be able to just return to life before. But that doesn't mean that what has happened needs to destroy her future or needs to define her future."

Co-host Bianna Golodryga asked, "What can those around Jayme do now to make sure that they treat her in a way that's respectable, and that she feels confident in moving forward, and not bad the way you sometimes were made to feel?"

Smart replied, "I think it's really important, and as with any victim, to really think about the way that you speak to victims. And if you ask questions, really think about what you're saying. Because for years whenever people would ask me, 'Oh, you were brought down in public before, why didn't you run, and why didn't you scream?' For years, my brain didn't actually hear that question. When it would hear the words 'Why didn't you,' I actually heard, 'You should have,' which made me feel guilty, which made me feel like I didn't do enough to survive, when in fact I'm not ashamed of anything I did because ultimately I survived, and I'm here today. And the same is true of each and every victim."

Smart said that for Closs, the ability to make even small choices now is an important part of her recovery. "While I was kidnapped, I didn't get to decide when or what I ate or drank, or where or when I slept, or what I was able to wear. All those decisions were made for me. I felt like I was completely powerless. And so when I came home, having the ability to make choices again—I mean, even small choices like what cereal I ate for breakfast or what shoes I'm going to wear that day – that was a big deal for me because I was so controlled."

"I want them to know that anything I can do, I am more than happy to help them," Smart said. "I admire them all and I feel like everyone loves and supports them and wants to help them in every way we can. And at the same time, I think it's really important that we all give them the space and the privacy that they need to rebuild their foundation right now."

Co-host Norah O'Donnell asked Smart, "Do you want to meet with Jayme in person?"

"I would be happy to meet with Jayme in person, but that being said, if she wants space and she doesn't want to talk to me, that is completely fine," she replied. "I will never presume to push myself upon anyone."

Smart offered praise for Closs, who managed to escape her captor and find help. "She is just incredible. What she has been through and how she was able to escape, she's truly a hero," she said.

The suspect in the case, Jake Thomas Patterson, who is accused of kidnapping Closs and murdering her parents at their home, is scheduled to make his first court appearance Monday.