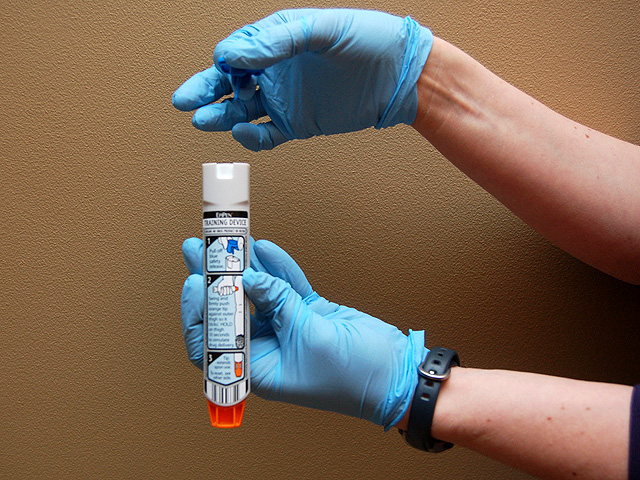 (CBS News) Most young children with known food allergies still experience potentially life-threatening allergic reactions, according to a new study.  The study also found most kids experiencing these severe reactions may not be getting the necessary emergency treatment.

Even more troubling: a portion of these kids are being given the food they're allergic to on purpose to see how they'll react.

The worrisome findings suggest parents and caregivers need to better educate themselves about risks and treatments for kids' food allergies.

"This study really highlights a number of ways in which things go wrong," study co-author Dr. Scott H. Sicherer, a clinical researcher at the Jaffe Food Allergy Institute at New York City's Mount Sinai School of Medicine, told WebMD. "The good news is that these are addressable issues."

The study, published in the June 25 issue of Pediatrics, looked at 512 infants between 3- and 15-months old who were diagnosed with or at risk for an allergy to milk or eggs. Over a three-year follow-up period, 269 of the children suffered an allergic reaction to food, with some children experiencing multiple allergic episodes. A closer look found 42 percent of reactions were triggered by milk, 21 percent were caused by eggs, and almost 8 percent were tied to peanuts.

A questionnaire given to parents found reaction-inducing foods were provided by others such as relatives or caregivers in a little more than 50 percent of the allergic reactions. Problems included poor supervision and a  lack of vigilance in reading ingredient labels or when preparing food.

"This is a high rate of reactions and concerning," study co-author Dr. David Fleischer, a pediatric allergist at National Jewish Health Center in Denver, told USA Today, adding that parents were counseled "on a regular basis about food avoidance."

Especially concerning was that of the 834 allergic reactions to milk, eggs or peanuts, 93 of the incidents were triggered intentionally by parents trying to expose their kid to the allergy-inducing food - about 11 percent of reactions. Fleischer told USA Today that finding suggests some caregivers were either aiming to reintroduce the allergy to see if their infant had outgrown it, or were attempting to find out how allergic the child was.

Another concerning finding reflected treatment gaps for kids with severe allergies. About 11 percent of the allergic reactions in study were severe, but only about 30 percent of those reactions were treated with epinephrine, or an EpiPen. That means for 70 percent of the severe allergic reactions, kids didn't receive treatment that one day might  bed needed to save their lives. Reasons for this undertreatment included parents not being able to recognize symptom severity or waiting until symptoms worsened, epinephrine not being available and fears about administering the adrenaline shot over side effects.

"The lesson here is that we as doctors need to make sure we talk to families about the safety of the medication," Sicherer told TIME. "It maybe makes people jittery, but so does coffee. [Epinephrine] reverses all the severe symptoms and gives you time to get to the emergency room before it gets worse."

Food allergies affect about 8 percent of children, according to the researchers. The authors say parents, relatives, teachers and other caregivers need to be better educated about food allergies and reassured of epinephrine's safety when administering it to kids suffering these reactions.

The National Institutes of Allergy and Infectious Diseases has a food allergy education program for parents with basic information, checklists and videos for parents.