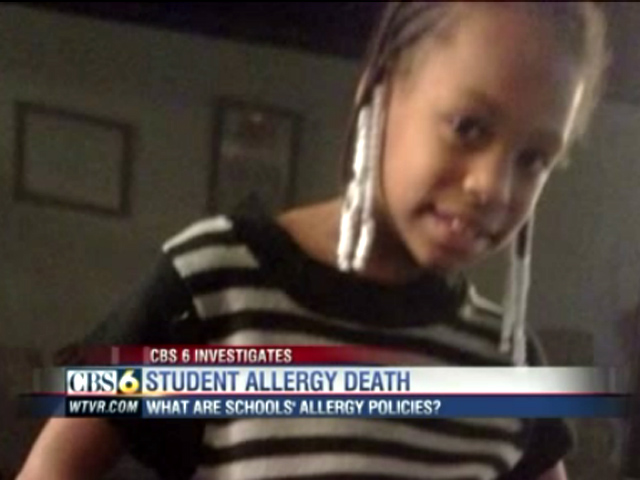 (CBS) The death of a 7-year-old girl at school from a peanut allergy has raised questions about a school's responsibility in treating kids with food allergies.

Two days ago, Ammaria Johnson died after suffering an allergic reaction at Hopkins Elementary School in Chesterfield Country, Va., WTVR CBS 6 in Richmond reported. The death is still being investigated, but Johnson's mother told WTVR she learned from the school principal and a doctor that the allergy was to a peanut product.

Emergency crews were called to the school on Monday, but by the time they arrived, the child was in cardiac arrest, according to a Chesterfield Fire Department spokesman Lt. Jason Elmore. Johnson was pronounced dead a short time later at CJW Medical Center in Richmond.

Food allergies affect an estimated 6 to 8 percent of children under age 5, and about 3 to 4 percent of adults, according to the Mayo Clinic. Food allergies can cause a number of symptoms, ranging from digestive problems and hives to a life-threatening reaction called anaphylaxis.

How did the school respond? County school and health officials could not discuss Johnson's death directly, although they said it is the responsibility of the parent to provide medicine and instructions to doctors for kids with allergies.

"For any medication, the school would have to be in possession of that medication to provide it," Shawn Smith, a spokesman for Chesterfield County Public Schools, told ABC News. "The medication we receive, or should receive, has to be specific to that child, whether it's over-the-counter or prescription."

The girl's mom, Laura Pendleton, told WTVR she authorized an allergy action plan to give her daughter Benadryl in case of an allergic reaction, but the school didn't give the girl the medication. Pendleton said she had tried to give an aid an EpiPen for emergencies, but was told to keep it at home. An EpiPen is available with prescription and gives a dose of epinephrine that reverses symptoms of an allergic reaction for enough time to get the person to a hospital.

The girl's tragic case raises the question: Should schools stockpile EpiPens to treat kids in the event of an allergic reaction?

Maria Acebal, head of the Food Allergy and Anaphylaxis Network, told CNN that Ammaria's death "underscores the need for all teachers to have the basics of food allergy safety as part of their orientation and continuing education."

Acebal told ABC she's supporting a bill that would let all schools give EpiPens to any student, regardless of if they have a prescription.

"No one in this country has ever been sued for giving epinephrine, to my knowledge," Acebal told ABC. "All the lawsuits come about because school officials don't give it when it's needed."