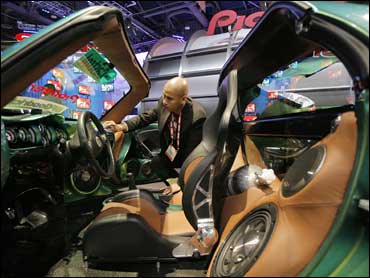 The deep bass sound vibrates your breastbone as you meander through a corner of the massive International Consumer Electronics Show. Someone is simply showing off car audio systems, but it feels like the vehicles themselves are announcing their beefy presence.

And why not? Cars and automotive technologies from startups and established aftermarket makers are abundant at this gadget show. They're coming in such variety that they encapsulate many of the advances seen elsewhere at CES in cell phones, TVs, video games and wireless Internet networking.

For example, one theme at CES is the development of touch-screen and voice-activated controls for portable devices. Cars are showing that off, too, with systems that let people make phone calls, navigate, choose music and have e-mails read to them without dangerously fumbling for manual controls.

Or look how CES overall is highlighting the widening availability of Internet content. Autonet Mobile Inc. offers a small box for car trunks that takes a cellular broadband signal and uses Wi-Fi to relay it to portable computers in the car, so people can browse the Internet in the vehicle. And while the car is parked near a home wireless network, people can beam music and video content to it for enjoyment on upcoming road trips.

"The car is a lifestyle product," said Sterling Pratz, Autonet Mobile's CEO. "It's not just a car anymore."

The goal of all this stuff is to keep drivers better informed and their passengers entertained. But no one seems to have a great answer to the question of whether adding more technological choices to moving vehicles will increase the dangerous problem of driver distraction.

Automobiles have had technological accouterments ever since the advent of the car radio. In-vehicle technologies were an $11 billion market in 2007, according to the Consumer Electronics Association, and it is expected to jump to $12.8 billion this year.

But the auto and the electronics industries have not been closely linked. Attempts in the 1990s at connecting cars to the Internet flopped.

One complicating factor has been that car makers design for a much longer future than gadget makers, which expect buyers to dig back into their pockets virtually every year. So automakers that select particular electronics might get locked into formats or functions that are obsolete when the car is still young, or even by the time it finally makes it to showroom floors. Aftermarket vendors have often filled the gap.

Now, though, factory-installed technologies are getting more powerful. One example is the way Ford Motor Co. has teamed with Microsoft Corp. on Sync, a voice-activated communication and entertainment system.

One reason for automakers' increasing comfort is that powerful computers now found in cars can get software updates fired in by wireless networks, letting vendors fix bugs and keep features up to date, said Erik Goldman, president of Hughes Telematics Inc. His company is expected to begin outfitting Chrysler and Mercedes cars with a navigation, entertainment and diagnostics service in 2009.

Another change is that car makers have often sought to differentiate themselves with proprietary electronic systems, like General Motors Corp.'s OnStar, that operate independently from gadgets people regularly use outside the car.

But these days automotive electronics are being more closely integrated with standard Web technologies.

For example, the Hughes Telematics system will include a personal Web portal that lets people remotely lock and unlock their car doors, plan routes, check their auto's emissions and engine status, select music playlists and even monitor their vehicle's location.

Increasing ties to the Web could broaden the field of automotive-tech vendors beyond traditional players. Last year, OnStar began working with MapQuest.com, part of Time Warner Inc.'s AOL LLC, so drivers could plan their routes online and send them to the car.

At a CES panel on the interplay between cars and electronics, Eckhard Steinmeier, general manager of BMW's "Connected Drive" initiative, showed a commercial in which a woman says she wants to investigate sushi options. So she heads out of her house, in the rain, to do a Google search from her Beemer's dashboard.

Car technology might be catching up to the state of gadgetry today, but it's not quite yet at the vanguard. The electronics industry "is still developing technology faster than the automaker can adapt," said Chris Cook, a vice president with Mitek Corp., a maker of car audio equipment.

But there is one sure sign of vigorous cross-pollination: Some automotive technologies at CES are described with some of the Web's most painful jargon. Has anyone really ever said they want more "infotainment" in their car?