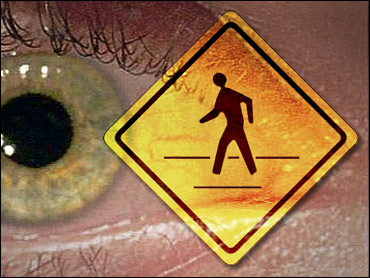 Equipped with a tiny camera, a high-tech device that recognizes the white stripes of a pedestrian crosswalk and reads traffic lights could tell a blind person when it's safe to cross the street, researchers say.

The electronic eye, being developed at Kyoto Institute of Technology, could one day be adapted for broader use to help the blind or visually impaired get around without a walking stick or seeing-eye dog.

Tested in a lab by Tadayoshi Shioyama and Mohammad Shorif Uddin, the technology has identified crosswalks, judged the width of roads and deciphered the color of pedestrian signals.

Though a prototype isn't ready yet, Uddin said researchers hope to make a device small enough to perch on a pair of glasses. It will be run by a miniature computer that can speak verbal instructions.

Canes and other travel aids with sonar or lasers can alert the user to approaching objects. Global Positioning Systems can tell what streets, restaurants, parks and other landmarks the user is passing.

So far, the Japan-based researchers' technology has shown promise at signal lights that don't have audio cues for blind pedestrians.

Using a handheld digital video camera, Uddin filmed 196 traffic intersections in Japan. Back in the lab, a computer program examined the footage using a 3-D matrix, and correctly detected the crosswalks in all but two instances, when it signaled the presence of intersections that weren't there.

"The system fails if the white paintings on the road are not perfect," said Shioyama, who began developing systems for the blind eight years ago. He stressed that the failures didn't pose a risk to the user.

Added features are expected to alert of passing or stationary cars, and computer software that locates the traffic light and analyzes its color also has been tested, Uddin said.

The results were described last month in the journal Measurement Science and Technology, published by Britain's Institute of Physics.

Though the experiments were limited to intersections in Japan, the system would theoretically work anywhere there are striped pedestrian crosswalks and pedestrian signals, Shioyama said.

Katherine Phipps of Britain's Royal National Institute of the Blind said she hadn't heard about the researchers' work. But she welcomed "any technological developments that may be able to aid blind and partially sighted people become more independent."