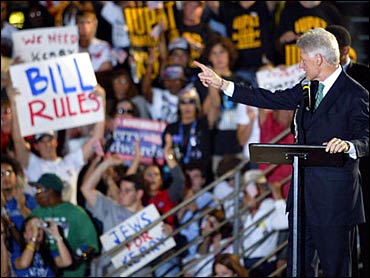 Former President Clinton may be out on the campaign trail, but he says he feels a bit detached "from the to and fro of the elections."

In an interview to be aired Thursday on ABC News' "Primetime Live," Mr. Clinton also says he prayed for his family before his Sept. 6 heart bypass operation and enjoyed the enforced rest that followed.

"I feel kind of distant from the to and fro of the elections," Clinton says in excerpts made available Wednesday, "and a lot of these things I see happening, I just shake my head and say, 'Gosh, I did that for 20 years, I know, but it doesn't have much to do with how we're gonna live when it's over.' On the other hand, I think it matters profoundly."

The interview with Diane Sawyer was conducted before Clinton, 58, began campaigning for Sen. John Kerry, D-Mass., on Tuesday.

He says he suffered no depression after the surgery and didn't mind the recuperation.

"I wish it was gonna go on six more weeks," he says. "I'm sleeping more than I have since I turned 21. And I like being able to read, and this total reflection has been very good for me. It's been very helpful. And if you work like I have, all your life, having a period of enforced contemplation and rest is really good."

Mr. Clinton campaigned for Kerry in Pennsylvania and Florida on Tuesday. He planned to campaign this weekend in Nevada, New Mexico and Arkansas.