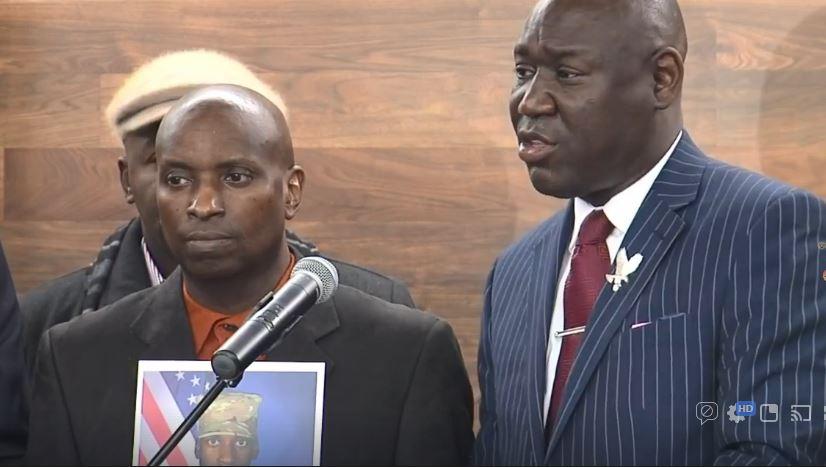 BIRMINGHAM, Ala. -- A man killed by an officer who mistook him for a gunman at an Alabama mall was shot three times from behind, according to a review conducted by a forensic pathologist at the request of the slain man's family.

Police were responding to reports of a shooting Thanksgiving night at the Riverchase Galleria in Hoover, a suburb of 95,000 people south of Birmingham, when an officer fatally shot 21-year-old Emantic "EJ" Bradford Jr. Police initially blamed Bradford, who they said had a gun in his hand and was responsible for shooting two people at the mall.

They later retracted that statement and identified Erron Brown, 20, of Bessemer, as the gunman. Brown was arrested by U.S. Marshals in the Atlanta area Thursday.

National civil rights attorney Ben Crump, who is representing Bradford's family, released the findings of the independent review during a press conference Monday at The Rock, the church Bradford attended in north Birmingham.  The Rev. Jesse Jackson also attended.

Witnesses have said Bradford, who was licensed to carry a gun, was trying to help usher others away from the gunfire, Crump said.

Pathologist Roger Mitchell, who Crump said based his conclusions on autopsy photos and evidence photos as well as observing Bradford's body, found the manner of death to be homicide. All three shots could have proved fatal, the review found.

Crump said the findings show the officer should be charged with a crime.

"There is nothing that justifies [the officer] shooting EJ as he's moving away from him. You're not a threat when you're running away," Crump said. "If it was anybody else who shot somebody three times in the back, they'd be charged with murder."

"He did not pose a threat to you — you could have taken him down without even firing a shot," Bradford said, addressing the officer. "That was wrong. My son was murdered by this officer, and that was cowardice."

Bradford said his son's loss has "destroyed" his family. He called for the officer to be charged with murder.

"There's no justice if you get off with this," Bradford said. "He needs to be charged with homicide because that's exactly what it is — it's a murder. How did you justify shooting my son?"

Bradford's uncle Anthony Thomas also called for a murder charge.  Addressing the officer, he said, "You're a coward. You shot my nephew in the back three times."

The officer has not been identified and is on paid administrative leave pending the investigation.

On Monday, Hoover police announced they would not release evidence in the shooting until the conclusion of the investigation conducted by the Alabama Law Enforcement Agency, based on a request Saturday from that agency. Activists have been calling on ALEA and the City of Hoover to release video of the shooting. In a letter to City of Hoover officials by ALEA, the agency asked the city not to release evidence including written reports, electronic records and video because it could affect the integrity of the investigation. Hoover Police Chief Nick Derzis said Monday the city would comply.

"We want everyone who lives, works or visits Hoover to know that we are committed to the safety of our city, to healing from these tragic events and to the transparency of the ongoing investigation," a city statement said.

Crump called for a swift conclusion to the investigation by the Alabama Law Enforcement Agency so video could be released. Crump said the family has met with ALEA and that investigators expressed their condolences and assured them they are working to conclude the investigation as efficiently as possible.

"We are trying very hard to take them at their word," Crump said. "It's very difficult for this father and this family after they were lied to before."

But activists who attended the press conference continued their call for the immediate release of the video, with one yelling, "Say no more! Release the damn video." The Bradford family's pastor, Mike McClure Jr., has  said releasing video would help calm growing tensions that have included days of protests.

"My concern here is that the longer this goes on, it's like a powder keg," Crump said.  "We need to as quickly as efficiently as possible conclude this investigation so we can restore the trust that was taken on Thanksgiving night when they defamed the character of [Bradford Jr.] and said that he was a criminal."