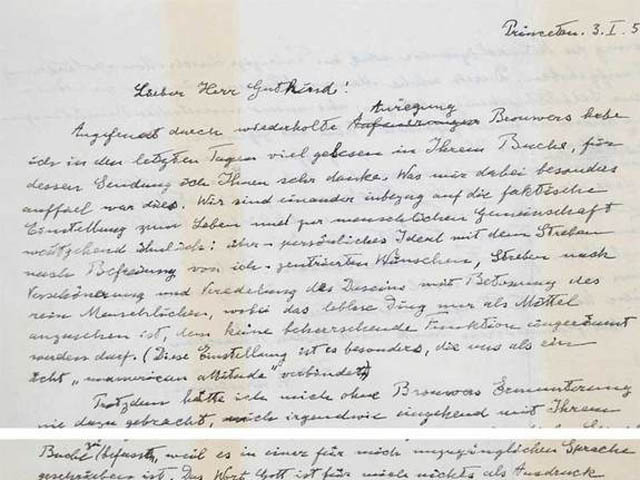 An eBay auction for an original letter handwritten by Albert Einstein in which he expresses his views on the existence of God opened tonight (Oct. 8), and in about 10 minutes an anonymous bidder named o***h had placed the first offer at the opening price of $3 million.

In the letter, Einstein calls belief in religion and God "pretty childish" and ridicules the idea that the Jews are a chosen people.

"This is the most historic and significant piece we have listed on eBay," Eric Gazin, president of Auction Cause, the agency managing the sale, told LiveScience in an email. "We are excited to offer a person or organization an opportunity to own perhaps one of the most intriguing 20th-century documents in existence. This personal letter from Einstein represents the nexus of science, theology, reason and culture."

Einstein handwrote the letter in German to Jewish philosopher Eric B. Gutkind on Jan. 3, 1954, a year before Einstein's death. The letter was a response to Gutkind's book "Choose Life: The Biblical Call to Revolt" (1952, H. Schuman; 1st edition).

In part of his letter, Einstein writes, "For me the Jewish religion like all other religions is an incarnation of the most childish superstitions. And the Jewish people to whom I gladly belong and with whose mentality I have a deep affinity have no different quality for me than all other people. As far as my experience goes, they are also no better than other human groups, although they are protected from the worst cancers by a lack of power. Otherwise I cannot see anything 'chosen' about them," as translated from German by Joan Stambaugh. [Religious Mysteries: 8 Alleged Relics of Jesus]

In his book, Gutkind suggested that unlike the mass hypnosis spoiling mankind at the time, "The soul of the Jewish people was never a mass-soul. Israel's soul could not be hypnotized; it never succumbed to hypnotic assaults. ... The soul of Israel is incorruptible."

And as for whether Einstein believed in God? Yes and no, it seems.

In a March 24, 1954 letter, he is quoted as writing, "It was, of course, a lie what you read about my religious convictions, a lie which is being systematically repeated. I do not believe in a personal God and I have never denied this but have expressed it clearly. If something is in me which can be called religious then it is the unbounded admiration for the structure of the world so far as our science can reveal it."

However, in the letter to Gutkind, Einstein wrote the word God was "nothing more than the expression and product of human weaknesses, the Bible a collection of honorable, but still primitive legends which are nevertheless pretty childish."

This isn't the first time this "God" letter has been up for auction: In 2008, an unidentified buyer who had "a passion for theoretical physics" bought the letter at a Bloomsbury Auctions sale in London for $404,000, 25 times its presale estimate, according to an article in the New York Times.

The letter to Gutkind has been stored in a temperature-, humidity- and light-controlled environment at an academic institution specializing in the care of cultural heritage collections, according to an eBay description. Since the letter has been known among scientists for more than 50 years, the description reads, its authenticity has never been questioned. The letter is in its original envelope, holding a stamp and postmark from Princeton, N.J, where Einstein lived toward the end of his life.

The last few years have seen an outpouring of projects that bring the famous genius down to earth: For instance, in March, a large collection of Einstein's documents -- everything from personal letters to scientific manuscripts -- went online as part of an endeavor by the Albert Einstein Archives at the Hebrew University of Jerusalem and at the Einstein Papers Project at the California Institute of Technology. The archive reveals both the academic side of Einstein -- with one of only three existing manuscripts containing the famous E=mc^2 equation written in Einstein's handwriting -- and his personal life -- with a postcard to his mother Pauline.

In addition, in 2011 pieces of his brain went on display for the first time at Philadelphia's Mütter Museum and Historical Medical Library. And just last month an iPad app was released that allows the public to get up close and personal with Einstein's gray matter.

The "God" letter will be up for auction for 10 days; anyone interested (with the money to spare) can make an eBay bid here.