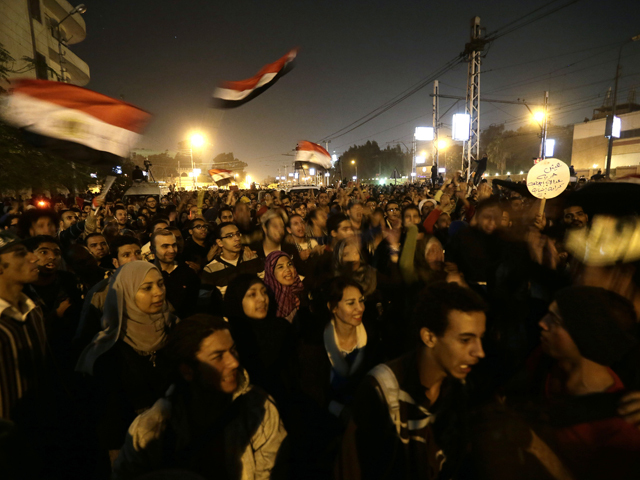 CAIRO An angry Mohammed Morsi refused Thursday to call off a referendum on a disputed constitution that has sparked Egypt's worst political crisis in two years, drawing chants of "topple the regime!" from protesters who waved their shoes in contempt.

The Egyptian president's uncompromising stand came a night after thousands of his supporters and opponents fought pitched battles outside his Cairo palace, leaving at least six dead and 700 injured.

Speaking in a nationally televised address, Morsi accused some in the opposition of serving remnants of Hosni Mubarak's authoritarian regime and vowed he would never tolerate anyone working for the overthrow of his "legitimate" government.

That brought shouts of "the people want to topple the regime!" from the crowd of 30,000 Morsi opponents — the same chant used in the protests that brought down Mubarak.

Morsi also invited the opposition to a "comprehensive and productive" dialogue starting Saturday at his presidential palace, but gave no sign that he might offer any meaningful concessions.

The opposition has already refused to engage Morsi unless he first rescinds decrees giving him nearly unrestricted powers and shelves the draft constitution hurriedly adopted by his Islamist allies in a marathon session last week.

Morsi said the referendum on the disputed charter would go ahead as scheduled on Dec. 15. He also refused to rescind the Nov. 22 decrees.

CBS News correspondent Holly Williams reported that some people in Egypt thought that after days of protests and bloodshed that Morsi would make a major concession Thursday night. But what he did offer won't be enough for his opponents. They wanted him to immediately give up all of the sweeping new powers that he gave himself two weeks ago, and they wanted him to postpone a referendum on Egypt's new constitution, which is due to take place in under 10 days' time. They say that constitution doesn't protect the rights of all Egyptians. But Morsi didn't do either of those things.

Reading from prepared notes, Morsi frequently broke off to improvise. He wore a black tie in mourning for the six people killed in Wednesday's clashes.

From Washington, President Barack Obama called Morsi to express "deep concern" about the deaths and injuries of protesters in Egypt, according to a White House statement.

The statement Thursday night said that Obama told Morsi that he and other political leaders in Egypt must make clear to their supporters that violence is unacceptable. Obama welcomed Morsi's call for a dialogue with opposition leaders in Egypt but stressed that such a dialogue should occur without preconditions. The United States also has urged opposition leaders to join in talks without preconditions.

Earlier Thursday, Morsi's troubles grew when another of his advisers quit to protest his handling of the crisis, raising to seven the number of those in his 17-person inner circle who have abandoned him. The only Christian in a group of four presidential assistants has also quit.

During his speech, Morsi repeated earlier assertions that a conspiracy against the state was behind his move to assume near unrestricted powers, but he did not reveal any details of the plot.

"It is my duty ... to protect institutions of the nation," he said. "I will always fulfill this role, no matter how much pressure or what the situation."

Opposition protesters jeered and raised their shoes in contempt.

"We have two simple demands: Cancel the decrees and change the draft constitution. Other than that he can just go away," shouted one protester, Osama El-Sayyed.

"I have no hope in this man" shouted another as thousands chanted "Erhal! Erhal!" — "Leave! Leave!" in Arabic.

Later, a photograph of Morsi giving his speech was circulated on social networking sites alongside one of Mubarak addressing the nation during the 18-day uprising that toppled his 29-year rule in February 2011. Both wore black ties and dark suits.

"Tonight, he proved that he is not a president for all Egyptians, but merely the representative of the Muslim Brotherhood in the presidency," Abdel-Ghani said on state television.

Earlier Thursday, the Egyptian army and elite Republican Guard sealed off the presidential palace with tanks and barbed wire, following the worst night of violence of the two-week crisis.

Responding to a call to "protect" the presidential palace, thousands of Brotherhood members and other Islamists descended on the area Wednesday, beating and chasing away some 300 opposition protesters who had been staging a peaceful sit-in there. Hours of street battles followed.

"We raise Egypt's flag but they raise the Brotherhood flag. This is the difference," Cairo protester Magdi Farag said as he held the tri-colored national flag stained with blood from his friend's injury in the clashes.