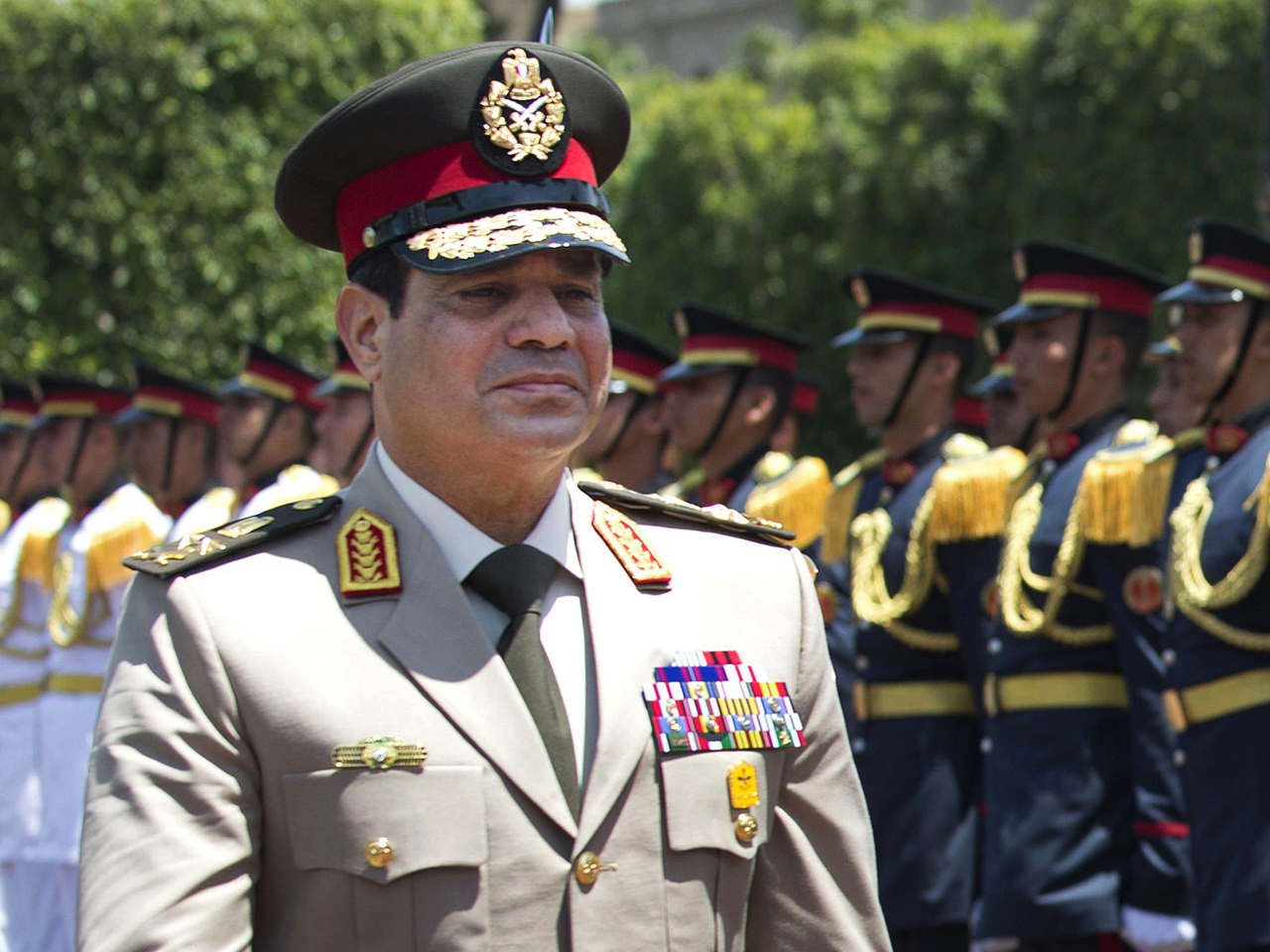 CAIRO Egypt's military chief on Wednesday called on his countrymen to hold mass demonstrations to voice their support for the army and police to deal with potential "violence and terrorism," a move that signals a stepped up campaign against supporters of the ousted Islamist president.

Gen. Abdel-Fattah el-Sissi, addressing a graduation ceremony for a class of military cadets, urged Egyptians to take to the streets Friday, saying a massive turnout would give him a "mandate" and an "order" to do what is "necessary" to stop bloodshed.

Since the military removed Morsi three weeks ago, the ousted president's Islamist supporters have taken to the streets vowing to continue protests until he is restored. Clashes have erupted multiple times between the Islamists and Morsi opponents or security forces.

Each side accuses the other of starting violence. Dozens have been killed, mostly from the pro-Morsi side.

Throughout, the military and its allied media have depicted the protesters as a dangerous armed movement. Morsi's Muslim Brotherhood and its allies say their protests are peaceful and have decried what they call military "massacres" against them.

At the same time, Islamic militants have stepped up attacks on security forces in Sinai Peninsula since Morsi's fall, killing nearly 20 soldiers and policemen and raising fears of a wave of militant violence. On Wednesday, suspected militants killed a soldier and wounded another in two separate attacks in Sinai.

In the early hours Wednesday, a bomb went off outside the main police headquarters in the Nile Delta city of Mansoura, wounding 19 people. Presidential spokesman Ahmad al-Musalamani called the attack an act of terrorism.

In his speech in the Mediterranean coastal city of Alexandria, el-Sissi called for rallies Friday to be as large as those on June 30, when millions took to the streets to demand Morsi's ouster, and July 3, when millions again celebrated his ouster. He promised police and troops would guard the rallies.

The call for demonstrations is likely to be matched by similar calls by Morsi's supporters, raising the specter of violence.

"On Friday, every honorable and honest Egyptian must come out. Come out and remind the whole world that you have a will and resolve of your own," el-Sissi said. "Please, shoulder your responsibility with me, your army and the police and show your size and steadfastness in the face of what is going on."

El-Sissi cautioned that his call for mass demonstrations should not be taken as an invitation to violence.

Commenting on el-Sissi's address, Essam el-Erian, a senior leader of the Islamist group from which Morsi hails, made it clear that the Morsi camp intends to stick to its guns. "There is no solution except rescinding the coup and the return of legitimacy," he told Al-Jazeera Mubasher Misr.

The July 3 coup that ousted Morsi followed four days of mass protests by millions of Egyptians demanding that he step down.

Morsi's supporters insist he must be reinstated, branding his ouster as a coup against democracy. The former president was Egypt's first freely elected leader, but his opponents say he concentrated too much power in his own hands and his Islamist group, the Muslim Brotherhood.

El-Sissi said on Wednesday that he had no intention, "not a for a second," to go back on a political road map he announced the day he ousted Morsi, which entailed parliamentary and presidential elections by early 2014 and a referendum before that on a new constitution or amendments to the one drafted by Morsi's Islamist backers.

He promised foreign observers from the U.N. and the European Union would be invited to monitor the elections. "We are ready for an election to be supervised by the whole world," he said.

El-Sissi was a member of the military council that ruled Egypt for nearly 17 months after the ouster in 2011 of autocrat Hosni Mubarak. He was the chief of military intelligence at the time. Morsi named him defense minister and military chief in August 2012.