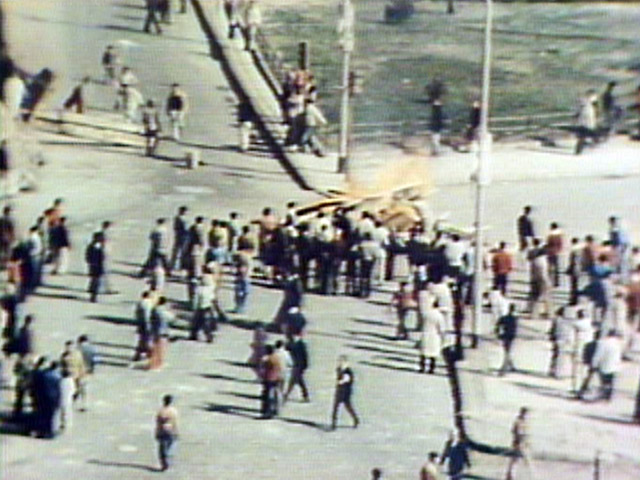 The last time Cairo's Tahrir Square saw rioting of this magnitude, the year was 1977 and the president was Anwar el-Sadat. Nine out of ten Egyptians lived in poverty. Half the male population was unemployed. When President Sadat cut public subsidies for flour, cooking oil, and other staples, people took to the streets in two days of violent protest. Known as the "bread riots," the public's rage forced Sadat to restore food subsidies, but when the army stepped in to quell rioters, 800 were injured, 80 were killed, and more than 1,000 were imprisoned. In his interview with Mike Wallace following the deadly riots, President Sadat insisted "I'm proud because I have the full support of the man in the street in Egypt."

2002: Mubarak on Why Egyptians Hate America

Photos: Mubarak and the U.S.

Today's revolt against Mubarak's regime is due in no small part to empty stomachs. If you're looking for background on the longstanding economic problems and deep roots of authoritarian rule in Egypt, this 1977 "60 Minutes" piece, produced by William K. McClure, is a good place to start.

Riggleman: Meadows' text trove revealed a "roadmap to an attempted coup"
Thanks for reading CBS NEWS.
Create your free account or log in
for more features.
View CBS News In
CBS News App Open
Chrome Safari Continue
Be the first to know
Get browser notifications for breaking news, live events, and exclusive reporting.