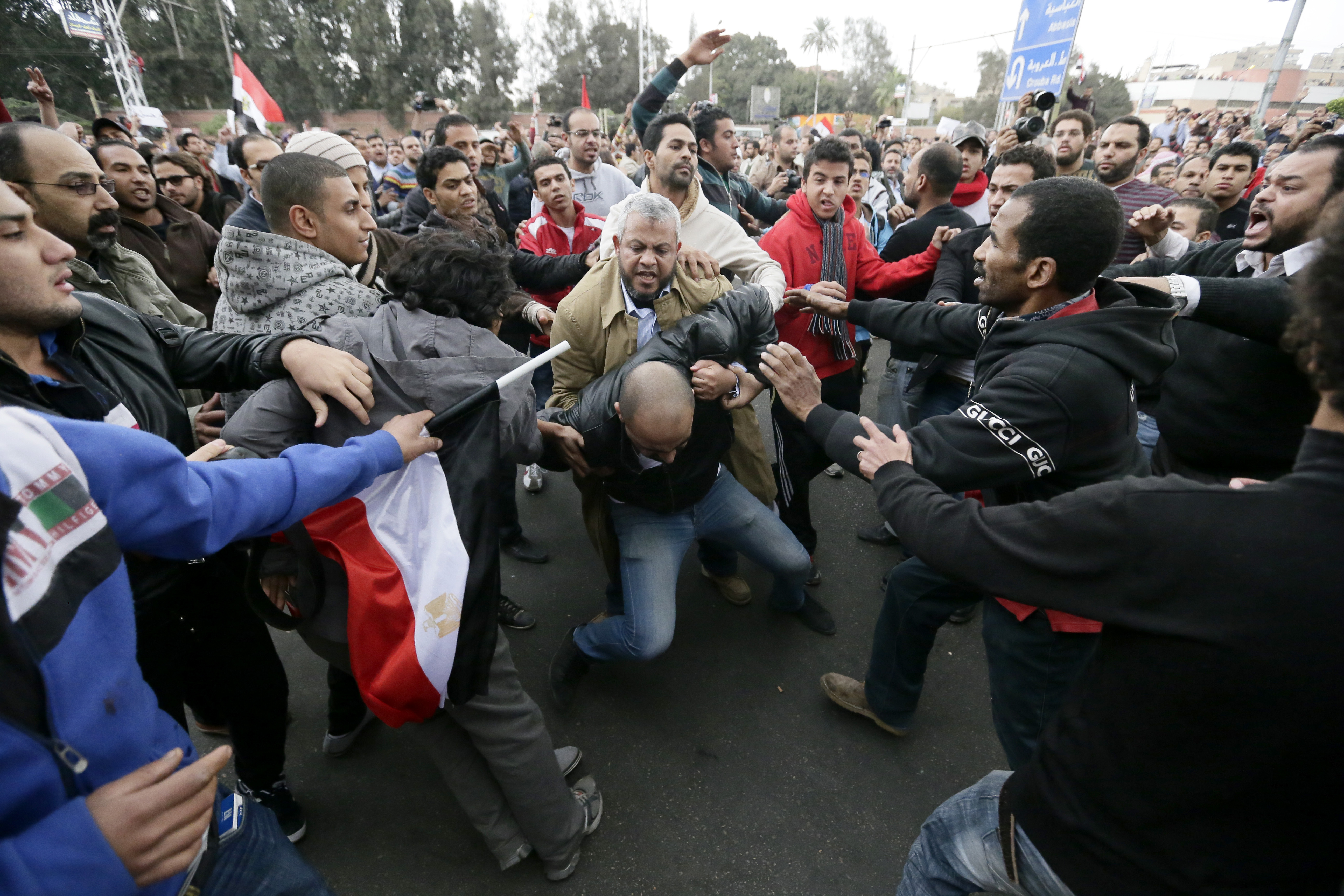 CAIRO Supporters and opponents of Egyptian leader Mohammed Morsi fought with rocks, firebombs and sticks outside the presidential palace in Cairo on Wednesday in large-scale clashes that marked the worst violence of a deepening crisis over the disputed constitution.

Egypt's Health Ministry said five people were killed and more than 350 people were wounded in the clashes that raged hours after nightfall, according to Reuters.

Three of Morsi's aides resigned in protest of his handling of the crisis. With two aides who had quit earlier, now five of his panel of 17 advisers have left their jobs since the problems began.

Mohamed ElBaradei, a leading opposition advocate of reform and democracy, said Morsi's rule was "no different" from that of former President Hosni Mubarak, whose authoritarian regime was toppled in an uprising nearly two years ago.

"In fact, it is perhaps even worse," the Nobel Peace Laureate told a news conference after he accused the president's supporters of a "vicious and deliberate" attack on peaceful demonstrators.

The dueling demonstrations and violence are part of a political crisis that has left the country divided into two camps: Islamists versus an opposition made up of youth groups, liberal parties and large sectors of the public. Both sides have dug in their heels, signaling a protracted standoff.

The latest clashes began when thousands of Islamist supporters of Morsi descended on the area around the palace where some 300 of his opponents were staging a sit-in. The Islamists, members of Morsi's Muslim Brotherhood group, chased the protesters away from their base outside the palace's main gate and tore down their tents.

The protesters scattered in side streets where they chanted anti-Morsi slogans. After a lull in fighting, hundreds of young Morsi opponents arrived at the scene and immediately began throwing firebombs at the president's backers, who responded with rocks.

"I voted for Morsi to get rid of Hosni Mubarak. I now regret it," Nadia el-Shafie yelled at the Brotherhood supporters from a side street. "God is greater than you. Don't think this power or authority will add anything to you. God made this revolution, not you," said the tearful el-Shafie as she was led away from the crowd of Islamists.

By nightfall, there were about 10,000 Islamists outside the palace. They set up metal barricades to keep traffic off a stretch of road that runs parallel to the palace in Cairo's upscale Heliopolis district. Some of them appeared to plan staging their own sit-in.

"May God protect Egypt and its president," read a banner hoisted on a truck that came with the Islamists. Atop, a man using a loudspeaker recited verses from the Quran.

"We came to support the president. We feel there is a legitimacy that someone is trying to rob," said engineer Rabi Mohammed, a Brotherhood supporter. "People are rejecting democratic principles using thuggery."

At least 100,000 opposition supporters rallied outside the palace on Tuesday and smaller protests were staged by the opposition elsewhere in Cairo and across much of Egypt. It was the latest of a series of mass protests against the president.

CBS News correspondent Holly Williams reports the Tuesday protestors called it a "final warning" to Morsi, who critics say is behaving more like a dictator than Egypt's first democratically elected leader -- a title he only gained in June election.

Buoyed by the massive turnout on Tuesday, the mostly secular opposition held a series of meetings late Tuesday and Wednesday to decide on next steps in the standoff that began Nov. 22 with Morsi's decrees that placed him above oversight of any kind.

It escalated after the president's allies who dominated the constitution-writing assembly hurriedly pushed through the draft constitution without participation of representatives of liberals, minority Christians and women.

While calling for more mass rallies is the obvious course of action, activists said opposition leaders also were discussing whether to campaign for a "no" vote in a Dec. 15 constitutional referendum or to call for a boycott.

Brotherhood leaders have been calling on the opposition to enter a dialogue with the Islamist leader. But the opposition contends that a dialogue is pointless unless the president first rescinds his decrees and shelves the draft charter.

Vice President Mahmoud Mekki called for a dialogue between the president and the opposition to reach a "consensus" on the disputed articles of the constitution and put their agreement in a document that would be discussed by the next parliament. But he said the referendum must go ahead and that he was making his "initiative" in a personal capacity not on behalf of Morsi. He put the number of clauses in disputes at 15, out of a total of 234.

Speaking to CBS News, ElBaradei said the dialogue offer is "a ploy. We will continue to push until we get a proper mechanism to develop a democratic constitution and to make sure that the goals of this uprising has been fulfilled which is justice, freedom and social equality."

He added they are going to try to stop the referendum because "we believe that this referendum is null and void. It has no legitimacy."

The charter has been criticized for not protecting the rights of women and minority groups, and many journalists see it as restricting freedom of expression. Critics also say it empowers Islamic religious clerics by giving them a say over legislation, while some articles were seen as tailored to get rid of the Islamists' enemies.

If the referendum goes ahead as scheduled and the draft constitution is adopted, elections for parliament's lawmaking lower chamber will be held in February.