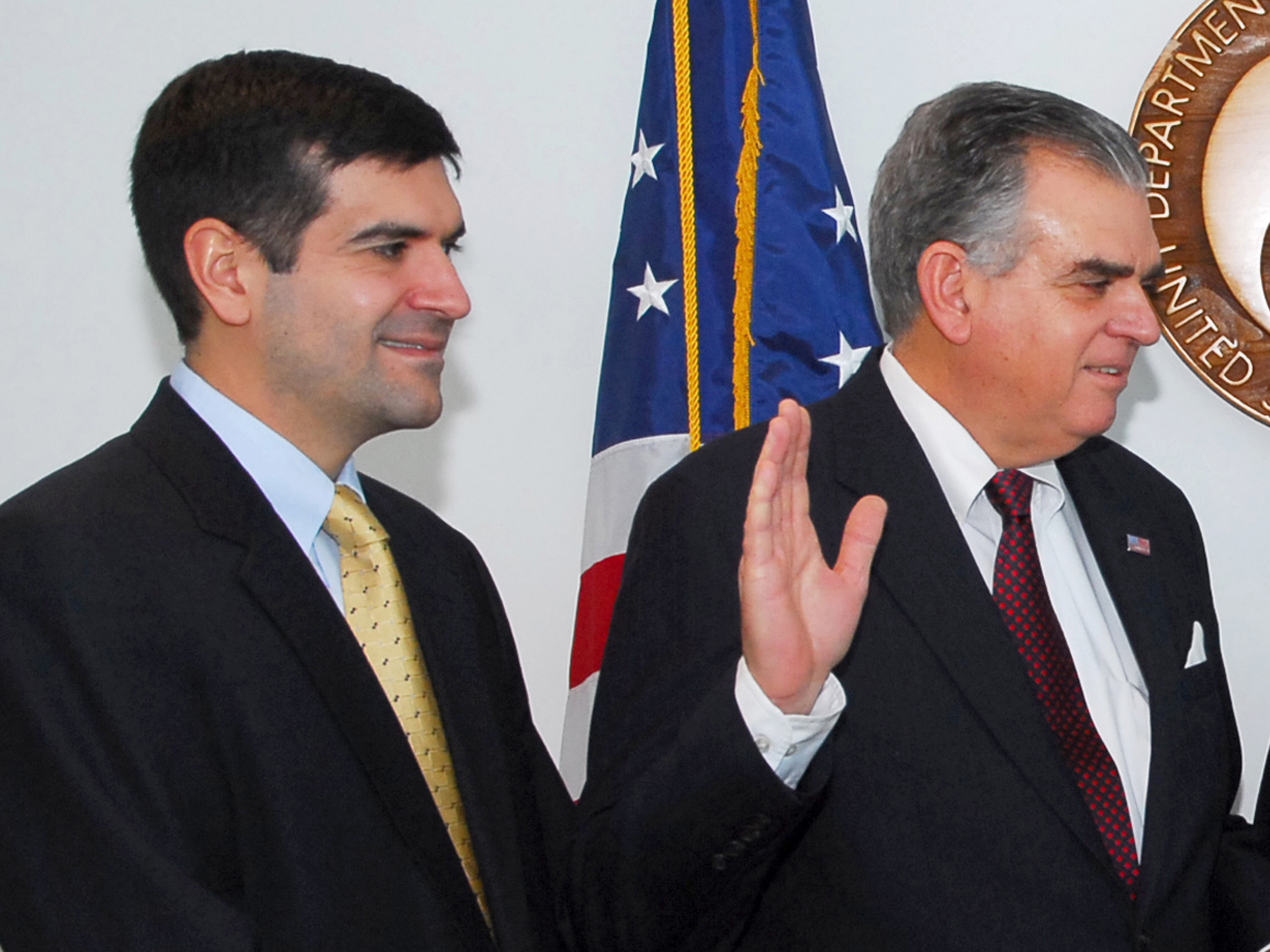 CAIRO - Egypt has released the names of 19 Americans who face trial over activities of their nonprofit groups in Egypt, a case that has soured U.S.-Egypt relations.

One of the 19 is the son of U.S. Transportation Secretary Ray LaHood.

Sam LaHood, director of the International Republican Institute, and five other Americans are in Egypt. The others have left, according to a statement from the Egyptian prosecutor's office.

Among the Americans indicted by the Egyptian public prosecutor over alleged illegal activities by their pro-democracy groups are: Charles Dunne, director of Middle East and North Africa programs at Freedom House; and Julie Hughes, director of the National Democratic Institute.

Altogether, 43 people face trials over illegally operating in Egypt and receiving funds from abroad without permission from Egyptian authorities for their human rights and pro-democracy groups. Egypt charges that they fund and support anti-government protests. The groups deny that.

Egyptian Cabinet minister Mohammed Amr said the government cannot interfere in the work of the judiciary.

"We are doing our best to contain this but ... we cannot actually exercise any influence on the investigating judges," he reporters at a security conference in Munich, Germany Sunday, before the announcement that charges would be filed against the foreign activists.

Protesters demand that the ruling military council speed up transfer of power to civilians saying that they are an extension of the old regime and that they have mismanaged the country's transitional period. The military took power after Mubarak resigned a year ago. It says it will hand over control after a new president is elected in June.

The military rulers tried to deflect criticism by claiming "foreign hands" are behind protests against their rule, frequently depict the protesters as receiving funds from abroad in a plot to destabilize the country.

Washington has reacted angrily to the case, which started in December with 17 raids by Egyptian security forces carried out on the offices of nongovernmental organizations the country feels are responsible for the unrest plaguing the country a year after President Hosni Mubarak was ousted.

"This is a thin veneer of a legal investigation over what's really a political smear campaign," Freedom House's Charles Dunne, one of those indicted, told CBS News.

It's unclear what the Americans will be charged with. But it seems to be part of a troubling crackdown on international pro-democracy and human rights groups in the country.

On "CBS This Morning" Monday, U.S. Ambassador to the United Nations Susan Rice said the Americans have done nothing wrong and need to be released immediately.

"They do what American and international NGO workers do in various different parts of the world, which is to support democratic development and civil society," Rice told Charlie Rose. "The work that they've done in Egypt is to build and support civil society as they seek to build a more democratic Egypt."

Rice said the United States has been talking to the Egyptian government "at all levels" over the last several weeks, and said that Cairo must understand that "this has serious consequences for our bilateral relationship, and that these individuals must be released."

The Obama administration is urging the Egyptian government to change course or risk losing more than $1.5 billion in American aid.

There are reports this morning that a number of the Americans who will be charged are actually hiding out in the U.S. Embassy in Cairo to avoid arrest. The State Department won't say how many Americans, citing privacy concerns.