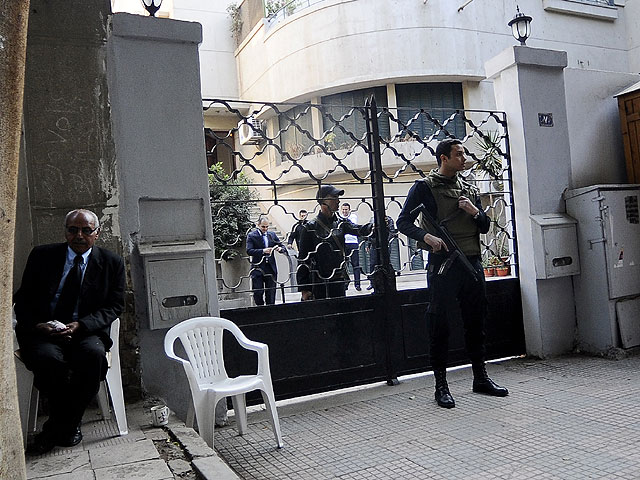 CAIRO - Egyptian security forces stormed the offices of 10 human rights and pro-democracy groups on Thursday, including several based in the U.S., accused by the country's military rulers of destabilizing security by fomenting protests with the help of foreign funding.

The raids on 17 offices throughout Egypt are part of the ruling generals' attempt to blame "foreign hands" for the unrest that continues to roil Egypt since the 18-day revolt that ousted longtime leader Hosni Mubarak in February, but that activists say failed to topple his regime.

Among the offices ransacked were the U.S.-headquartered National Democratic Institute, Freedom House and the International Republican Institute, which is observing Egypt's staggered parliamentary elections.

The U.S. State Department called on the Egyptian government "to immediately end the harassment of NGO staff, return all property and resolve this issue." Department spokeswoman Victoria Nuland said the U.S. ambassador to Egypt and the top U.S. diplomat for the Middle East have spoken to Egyptian officials about the situation and "made very clear that this issue needs immediate attention."

The raids on the NGOs were the first since Mubarak's ouster, though Egyptian officials have been levying accusations for months that the civil society groups are serving a foreign agenda. Most recently this month, Justice Minister Adel Abdel-Hamid accused around 300 nonprofit groups of receiving unauthorized foreign funding and using the money for protests.

The Interior Ministry said the raids on 10 nonprofit organizations were part of the investigation into foreign funding of rights groups.

By far the largest recipient of foreign funding in Egypt is the military itself, which has for more than 30 years received about $1.3 billion in annual U.S. security assistance.

Freedom House said its staff were held incommunicado during the raids and that cell phones, laptops, funds and documents found during the interrogations were confiscated. The group said in a statement the raids came just three days after it formally submitted papers to register its offices in accordance with Egyptian law.

Troops and police sealed the doors of the civil society groups and banned anyone from entering or speaking with employees as they were interrogated.

"In the current fiscal environment, the United States must not subsidize authoritarianism in Egypt while the Egyptian government is preventing NGOs from implementing democracy and human rights projects subsidized by the U.S. taxpayer," said Freedom House's Charles Dunne.

The Cairo-based Arabic Network for Human Rights Information, which is not under investigation, said in a statement that the raids went beyond the type of Mubarak-era tactics that spurred hundreds of thousands of Egyptians to take to the streets demanding freedom and democracy during this year's uprising.

"Mubarak's regime did not dare to undertake such practices prior to the uprising," ANHRI said, adding that the storming of the civil society organizations' offices is part of "a systematic campaign against these organizations, which was prepared for in advance."

The country's military was cheered by protesters when it took over security from Mubarak's hated police force in January during the uprising. The military, long the country's most powerful establishment and one that produced Egypt's last three presidents, sought to portray itself as a key player in the revolt that toppled Mubarak's 29-year rule.

However, in the eight months since Mubarak's ouster, the military, led by a general who served for 20 years as Mubarak's defense minister, has been methodically seeking to discredit the reformers, accusing them of illegally receiving foreign funds and being part of a plot hatched abroad to destabilize Egypt.

"Human rights organizations are the guardians of nascent freedom. Efforts to suffocate them will be a major setback and will surely backfire," ElBaradei wrote on his Twitter account.

An official with the Egyptian Attorney General's office said at least one of the U.S.-based organizations being searched was operating without proper permits. He did not say which one.

Laws requiring local and foreign civil society groups to register with the government have long been a source of contention, with rights activists accusing the government of using legal provisions to go after groups critical of its policies. Offenders can be sentenced to prison terms.

A security official said "influencing public opinion in non-peaceful ways" is among the possible charges that could be brought against the 10 organizations being investigated. The official spoke on condition of anonymity because he was not authorized to speak to reporters.

The security sweep on civil society offices comes on the heels of a military crackdown on protesters demanding ruling generals hand over power to a civilian authority. Soldiers attempting to end the protest last week beat women and dragged one half-naked while kicking her in the street. At least 17 protesters were killed, adding to the roughly 100 people killed in clashes with security since Mubarak's ouster.

Hassiba Hadj Sahraoui, Amnesty International's deputy director for the Middle East and North Africa, told The Associated Press that the ruling Supreme Council of the Armed Forces is trying to attack groups that have criticized the military's human rights records.

"I believe SCAF is trying to find some scapegoat (for their human rights record)," she said. "Targeting civil society was a technique used by Mubarak, so it really is reminiscent of the worst tactics of the Mubarak era."

In another development likely to inflame protests, an Egyptian court on Thursday acquitted five policemen of charges of killing five protesters and wounding six others during the uprising. More than 800 protesters were killed in the demonstrations.

The court said three of the defendants were not at the site of the killings while the two others fired against protesters in self defense.

Protesters have demanded that security forces who killed demonstrators be brought to justice along with those who gave orders to open fire. Mubarak himself is on trial on charges he was involved in the killing of protesters in the uprising. He could face the death penalty if convicted.