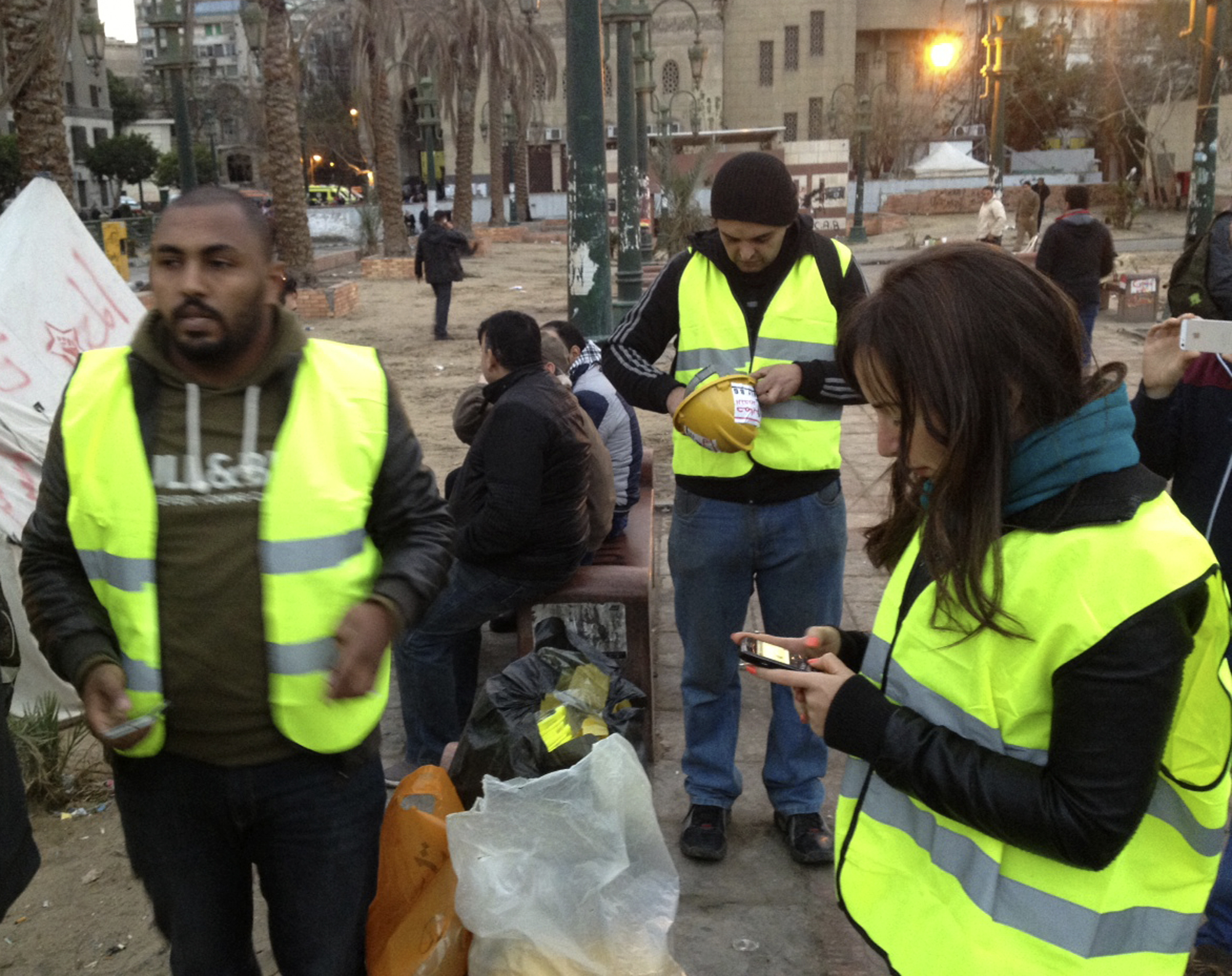 CAIRO Amid a growing number of brutal attacks on women protesters in Egypt, one stood out: A mob of men on Cairo's Tahrir Square raped a 19-year-old woman with a sharp object, cutting her genitals in an attack that forced her to undergo emergency surgery.

The assault was one of the worst in a string of attacks over the past year in which women have been stripped, groped and raped at demonstrations in Egypt. This past week alone, while mass protests filled city squares around the country, more than two dozen new sexual attacks were reported — a wave that activists call the worst in years and describe as the darkest stain on the country's opposition street movement.

In response, several groups have arisen to protect female demonstrators. On Friday, men and women clad in bright neon vests and hardhats patrolling Cairo's iconic square were part of the latest organization to emerge: Tahrir Bodyguard.

Soraya Bahgat said she founded the group using social media after seeing television footage last November of a mob of men attacking a woman and tearing off her clothes. She had been on the way to a demonstration at Tahrir herself, but instead stayed in, gripped with fear.

"It was sickening. They were dragging her through the street," said the 29-year-old, who works as a human resources manager. "I couldn't imagine something so horrific, and something that fundamentally would keep women from exercising their right to assembly like anyone else. No one should be prevented from demonstrating."

Such is the concern that the United Nations on Thursday demanded authorities to act to bring perpetrators to justice, saying it had reports of 25 sexual assaults on women in Tahrir rallies over the past week. Operation Anti-Sexual Harassment/Assault, which also patrols the square, reported 19 incidents on one day alone. It was January 25th — the second anniversary of the start of the uprising that toppled autocrat Hosni Mubarak.

It was in one of the attacks on the 25th that a mob set upon the 19-year-old woman in Tahrir, raping her with a bladed object, activists said.

"She had a laceration in her genitals and bite marks all over her body," said Hussein Elshafei, whose group Operation Anti-Sexual Harassment/Assault helped get the 19-year-old out of the crowd and to safety. "She was taken to hospital and remained there for a few days where she had an emergency surgery."

A health official confirmed the attack and injuries on condition of anonymity because he was not authorized to brief reporters.

Extraordinary violence has been used in more than one attack. Human rights campaigner Amnesty International says that several meet the definition of rape, including penetration with fingers and sharp objects. Frequently, fights with knives and blunt weapons break out when people try to stop the attacks, blurring the lines between those helping and the perpetrators.

"Testimonies from victims and those attempting to save them paint a frightening picture: tens if not hundreds of men surrounding the victims with countless hands tearing-off clothes and veils, unzipping trousers and groping breasts, nipples and backsides," Amnesty's Egypt researcher Diana Eltahawy wrote in a blog post on Friday.

The activists say they can expect little help from the police, who rarely intervene in such cases and who they accuse of failing to properly investigate allegations. Uniforms are almost never seen at Tahrir during demonstrations except at the fringes, where riot police regularly clash with rock-throwing youths.

Sexual harassment in Egypt is not a new phenomenon. Women on the streets frequently are subjected to everything from stares to cat-calls and attempts to grab them. In previous years, there were instances of young men ganging up to grope girls in parks or on main boulevards during public holidays when large crowds are on the street.

The trend however has worsened since the 2011 uprising, which saw a general collapse of security and rise in crime after the fall of Mubarak. This past June, as women marched through Tahrir demanding an end to harassment, a crowd assaulted them, overwhelming their male guardians and molesting several of the female marchers. And in October during Eid al-Adha, Islam's biggest holiday, activists trying to protect women were harassed themselves, as hordes of all-male onlookers shouted taunts and blew air horns at them.

Experts, activists and media have attributed the harassment to a wide range of possible factors. Some blame widespread unemployment or underemployment among youth. Others cite an attitude in the conservative nation that women should not be out in public and thus those who are are fair game. Activists have speculated that some attacks are planned, aiming to discredit the protesters or to dissuade women from joining them.

The patrols, which aim to deter potential assailants and evacuate women under assault, have prompted a backlash from harassers.

"We've had people beaten up, and in one instance a crowd — some of whom were carrying knives — tried to break into one of our locations," said ElShafei. "Threats are a regular occurrence."

In Tahrir on Friday, the neon-vested team said they had only had to make three interventions during the day's protest, which they attributed to their high visibility and a modest turnout in the square. With other groups present, including the one ElShafei works for, dozens of volunteers could be seen in the crowds. Violence that night was concentrated on the other side of the city, where thousands of protesters denouncing the president marched on his palace and clashed with security forces firing tear gas and water cannons.

It was the eighth day of the country's latest wave of political violence. Around 60 people have been killed in protests, rioting and clashes over the past week, the worst period of crisis since the fall of Mubarak. Observers say the protests are taking a dangerous turn as rival groups supporting and opposing Morsi's Islamist backers have taken matters into their own hands.

"I think people are getting more violent. It's been two years now and they are battle hardened," said Mohammed Osama, a 35-year-old computer engineer and black belt in judo who said he joined the bodyguard group after being slashed with a knife in street violence in his hometown of Alexandria. He said that after experiencing violence himself, he wanted to do something to prevent it from striking others.

"Individual efforts aren't enough — organization is needed. And it's the honorable thing to do," he said in measured tones, a scar visible under his eye.

As for the perpetrators of the attacks, he described them as a "social disease."

"Sometimes attacks are organized, other times it's people profiting from chaos on the streets, said Osama. "Ignorance and poverty is part of the problem, but for those who seek to victimize others, they now have another thing coming."