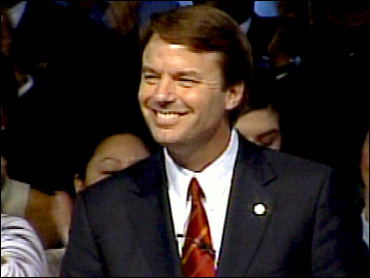 "It took three long years to see Ken Lay handcuffed and indicted for what he did," the North Carolina senator said Saturday in the weekly Democratic radio address. "In November, middle-class families will be able to rest assured that John Kerry will look out for their interests, restore corporate responsibility and put our economy back in line with our values."

He said Kerry understands that families are struggling to stay afloat.

"You can't save any money because it takes every dime you make to just to pay your bills. And if something goes wrong, a serious illness, or a layoff, you go right off the cliff," he said. "And to make things even worse, millions of Americans have lost their life's savings and pensions because of corporate crooks like Ken Lay."

Lay, a big political contributor whose largesse went mostly to Republicans, surrendered to authorities in Houston on Thursday and declared his innocence of charges he fraudulently hid losses and debt problems at Enron. He was indicted Thursday after a 2½-year investigation into the energy giant's collapse.

The Bush campaign said Friday that Lay attended a dinner at Kerry's Georgetown home "10 months after Enron went under" and that Lay had been on a board, the Heinz Foundation, overseen by Kerry's wife, Teresa Heinz Kerry.

Kerry spokeswoman Stephanie Cutter said Kerry wasn't at the dinner, the foundation was philanthropic, and Lay is no longer on the board.

Edwards, named by Kerry to the Democratic ticket on Tuesday, gave a few more details about what transpired that morning when the Massachusetts senator called and offered him a spot on the ticket.

Edwards continued: "As a father, I know that John Kerry will make this country stronger and more secure for my children and for your children."