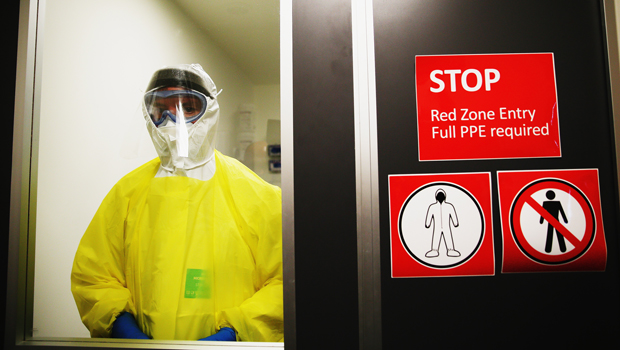 How do you know we've got Ebola on our minds? When you discover that stores around the country report selling out of Hazmat suits, to be used for Halloween costumes. We've asked our chief medical correspondent Dr. Jon LaPook to help us sort things out:

Ebola is a frightening virus, that's for sure. So it's understandable why there's widespread anxiety. But there's also been some illogical panic.

Here are some things to help put the handful of Ebola cases diagnosed in America in perspective:

Ebola is spread by direct contact with body fluids. It is not spread through the air the way influenza is. If it were, there would be millions of cases of Ebola throughout Africa, just as there are tens of millions of flu cases in this country every year.

Patients with Ebola are not infectious until they have symptoms.

Every single Ebola outbreak in Africa over the past 40 years has been brought under control with standard infectious disease measures -- basically, isolating infected patients and tracking down their contacts.

Ebola has a mortality rate of about 70 percent in the epidemic in West Africa, but as a colleague of mine has said, it has never before collided with modern medicine. Although no drug has been proven effective yet, treatments such as intravenous fluids to correct severe dehydration will likely dramatically improve outcome.

So far, there has been one death among 8 patients treated in America.

Still, people are understandably nervous. Significant mistakes were made after Thomas Eric Duncan traveled form Liberia and showed up at a Dallas hospital with Ebola. And it's clear not every hospital in America is prepared to deal with the virus.

That's why future patients will likely be transferred to specialized treatment centers, just as was done last week with the two nurses infected by Mr. Duncan.

And medical centers across the country aren't assuming they're more prepared than the hospital in Dallas was; that's why they're practicing what to do if an infected patient walks into their emergency room.


One thing's for sure: there will be a learning curve, and mistakes can never be totally eliminated. But if we keep finger-pointing to a minimum and keep learning from our mistakes, we will get Ebola under control in the United States.

And as we battle the relatively small number of cases here, we have to understand: The single most effective step our country can take to eliminate the threat in America is to help wipe Ebola out in West Africa.