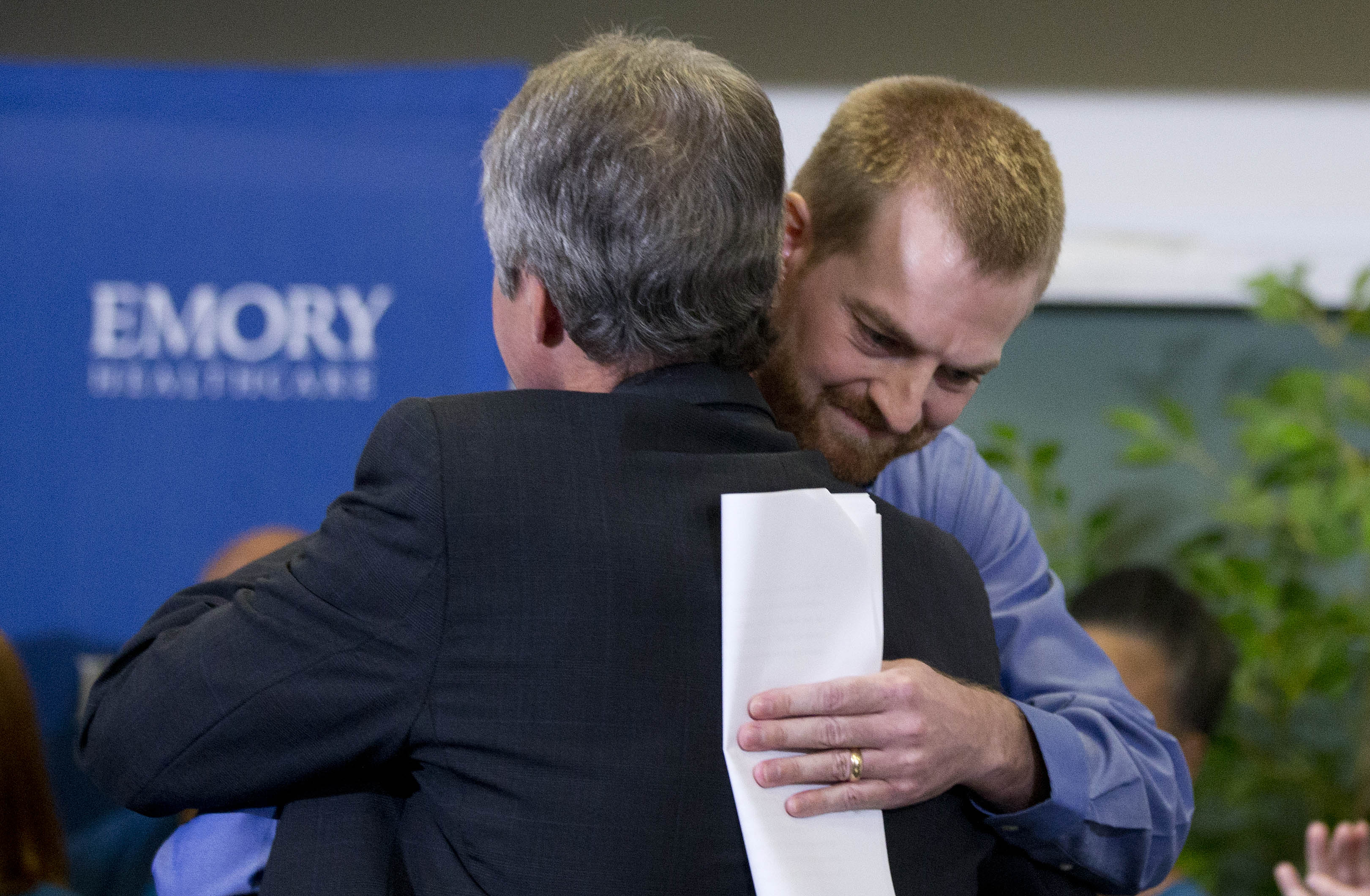 Dr. Kent Brantly and Nancy Writebol, American aid workers who were infected with the deadly Ebola virus in Africa, have recovered and have been discharged from an Atlanta hospital, officials announced Thursday.

An official at Emory University Hospital stressed that their release poses no public health risk, and Brantly, 33, called it a "miraculous day."

"I am thrilled to be alive, to be well, and to be reunited with my family. As a medical missionary I never imagined myself in this position," Brantly said. He spoke at a news conference after his release Thursday. Nancy Writebol, 59, was released Tuesday, and her husband said in statement emailed by aid group SIM that that she is free of the virus but in a weakened condition and was recuperating at an undisclosed location.

David Writebol says his wife "was greatly encouraged knowing that there were so many people around the world lifting prayers to God for her return to health." He calls her recovery "powerful testimony to God's sustaining grace."

He said Writebol decided it would be best to leave the hospital "privately."

Dr. Bruce Ribner, medical director of Emory's Infectious Disease Unit, said at a press conference that he anticipates a "complete recovery" for both Brantly and Writebol. He said he was confident the discharge of the patients posed no public health threat.

"The Emory Healthcare team is extremely pleased with Dr. Brantly's and Mrs. Writebol's recovery, and was inspired by their spirit and strength, as well as by the steadfast support of their families," Ribner said.

Brantly and his wife stood holding hands before he read from a written statement. He choked up several times while thanking his aid group, North Carolina-based Samaritan's Purse, and the Emory medical team standing behind them.

After speaking, the couple hugged the medical staff and joked with them. Several blinked back tears, then cheered and applauded as Brantly and his wife made their way from the room.

In his statement, David Writebol said Nancy "was greatly encouraged knowing that there were so many people around the world lifting prayers to God for her return to health. Her departure from the hospital, free of the disease, is powerful testimony to God's sustaining grace in time of need."

Brantly, 33, was flown out of the west African nation of Liberia on Aug. 2, and Nancy Writebol, 59, followed Aug. 5. The two were infected while working at a missionary clinic outside Liberia's capital.

Brantly and Writebol received an experimental treatment called Zmapp, but it's not known whether the drug helped or whether they improved on their own, as has happened to others who have survived the disease. The treatment is so novel that it hasn't been tested in people.

"Frankly, we do not know whether it helped them, whether it made no difference or whether it theoretically delayed their recovery," Ribner said of Zmapp.

The limited supply of Zmapp also was tried in a Spanish missionary priest, who died, and three Liberian health care workers, who are said to be improving.

The Ebola outbreak has killed more than 1,300 people across West Africa. There is no proven treatment or vaccine. Patients are given basic supportive care to keep them hydrated, maintain their blood pressure and treat any complicating infections. Ebola is spread only through direct contact with the bodily fluids of sick people experiencing symptoms.

On Thursday in the Liberian capital of Monrovia, calm set in one day after residents in a slum that was sealed off in an effort to contain the outbreak clashed with riot police and soldiers. World Health Organization officials were visiting two hospitals that are treating Ebola patients and struggling to keep up with the influx of patients.

The death toll is rising most quickly in Liberia, which now accounts for at least 576 of the fatalities, the WHO said. At least 2,473 people have been sickened across West Africa - more than the caseloads of all the previous two-dozen Ebola outbreaks combined.

About 160 health care workers have been infected, including Brantly and Writebol, who were wearing protective gear to prevent infection.

That's been a big concern in the medical community, but CBS News correspondent Dr. Jon LaPook reports one possibility being strongly considered is that the two Americans were actually infected outside the Ebola ward, at dinner or some other setting where they would not have been expected to be wearing the protective equipment.

Writebol and Brantley apparently came in contact with a Liberian health care worker who was sick. He had at least a fever and several days later he died from Ebola.

"Now, if it turns out that's how the two Americans got infected with Ebola, it would actually be kind of reassuring because then you wouldn't have to invoke a problem with the protective equipment as the reason for them getting infected", LaPook says.