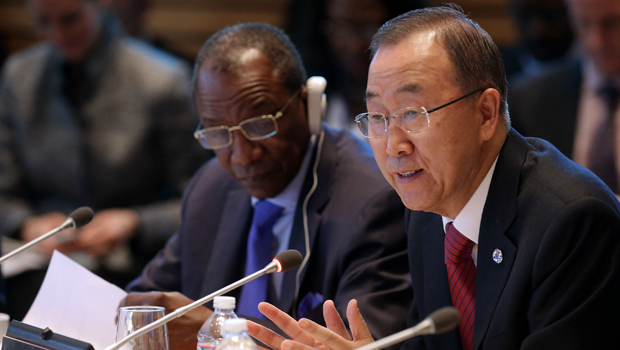 UNITED NATIONS -- Secretary-General Ban Ki-moon said Thursday that a trust fund he launched to raise $1 billion to provide fast and flexible funding for the fight against Ebola has only $100,000 in the bank.

Ban appealed urgently to the international community to provide the money, which he said will enable the United Nations "to get ahead of the curve and meet our target of reducing the rate of transmission by Dec. 1."

The secretary-general said the U.N. fund has received about $20 million, but the United Nations later clarified that the $20 million had been pledged, not received.

There is a separate $1 billion U.N. appeal for the humanitarian needs in Liberia, Sierra Leone and Guinea. The U.N. said as of Wednesday it has received $365 million in pledges, about 37 percent of the amount sought. The trust fund was launched to specifically address the Ebola outbreak response, and it is administered by the U.N. Development Program.

The World Health Organization said Thursday that the Ebola death toll will reach more than 4,500 this week, from among 9,000 people infected by the deadly disease mainly in Liberia, Sierra Leone and Guinea. It has projected that there could be between 5,000 and 10,000 new cases a week in early December without urgent action.

He said dozens of countries "are showing their solidarity," singling out the U.S., Britain, France, Canada, Germany, Poland, Japan, South Korea, Cuba and China. But he said it's time that countries that have "the capacity" - which he didn't identify - provide support.

The secretary-general said he liked the idea of greater public support for the fight against Ebola, including the possibility of a fundraising concert promoted by someone like U2 singer Bono.