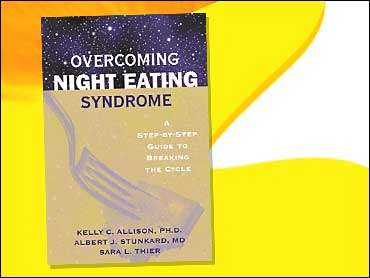 After the dinner dishes have been washed and the household is sleeping, some people are just beginning to feel hungry and overeat, sometimes consuming almost an entire day's worth of calories after dark.

One of the authors is Kelly Allison, a clinical psychologist at the University of Pennsylvania School of Medicine. She tells The Early Show co-anchor Harry Smith Night Eating Syndrome (NES) is getting more attention with the obesity epidemic.

"We think it affects about 1.5 percent of the population, but it is more prevalent the more overweight you are," she says.

Interestingly enough, many men suffer from this syndrome. She notes, "The traditional disorders, anorexia and bulimia, are tied into body image issues and pressures to be thin, whereas this is more a disorder of overeating."

Here are some highlights from Allison's research:

Allison says that few doctors and mental health practitioners have been trained to recognize NES. As a result, they may misdiagnose patients, minimize their symptoms, or prescribe treatments that don't work.

She recommends the following strategies that may help:

Keep A Food Journal - In weight loss, a daily food journal is one of the best predictors of how well a person will stick with the program. So Allison says her team based their philosophy on that technique to make people stop and think about their food choices. Even at 3 a.m., they can pick something that's not high in sugar or calories.

Structure Mealtimes And Snacks and switch to low-calorie or low-fat foods. Maintain a set time and amount for your evening snack, and gradually decrease the portion size.

Behavioral Techniques - Once you become aware of your choices, you can start to question how much you need to be eating and why you're eating it. Ask, "What's the worst thing that would happen if I didn't eat now? Would it be so horrible to miss several hours of sleep and be tired at work tomorrow?" You can also try muscle relaxation and deep breathing to relieve stress.

Therapy - A therapist or psychologist can get to the bottom of what's behind the behavior. If they are not familiar with this particular disorder, Allison advises taking the book with you. Through their Web site, Allison and her team will work with your physician to recommend an approach that works.

Medication - A couple of studies show that sertraline (Zoloft), which controls seratonin levels and was originally approved for treating depression, was successful in 60-70 percent of the cases of NES. This is just one of the options that needs further study before it can be broadly recommended.

Allison notes, "If you feel like this is something that is just starting, you might want to try some of the self-help behavioral techniques. If it is causing you distress, go see a doctor, or a psychologist, or psychiatrist."

Are You a Night Eater? of Overcoming Night Eating Syndrome

When did you first become aware of night eating syndrome (NES)? If you have never heard it called this name before, that's okay. That's also true for most of the public and the majority of health care providers. It's been only recently that discussions of NES have appeared in a few magazines and on some Web sites. Although you and others with this condition may not have been able to label your eating habits as NES, the problems you face are very real and very challenging. For example, consider Beth's situation:

Beth is a forty-five-year-old mother of three who is worried about her eating habits. She says that during the day she doesn't eat much at all. But in the evening and late at night she finds herself eating most of her daily intake of food. She attributes this unusual eating pattern not only to caring for and worrying about her kids, but also to the fact that she is working two part-time jobs. She has a hard time falling asleep and wakes up in the middle of the night needing to eat in order to fall asleep again.
Beth believes that this pattern of night eating began ten years ago when her last child, Emily, was born with Down's syndrome. Since that time, Beth has experienced great stress in caring for her daughter. After Emily's birth, Beth was unable to lose the weight she had gained during pregnancy and she continued putting on more weight. She is approximately fifty-five pounds overweight and feels depressed about her inability to lose those extra pounds. The mental and physical stress of caring for her developmentally disabled daughter, along with her inability to control her night eating and her increasing weight, have left her feeling depressed and hopeless.

The Primary Signs of Night Eating Syndrome
Beth's situation is characteristic of someone with NES. There are five primary signs that characterize NES. These signs are discussed below: