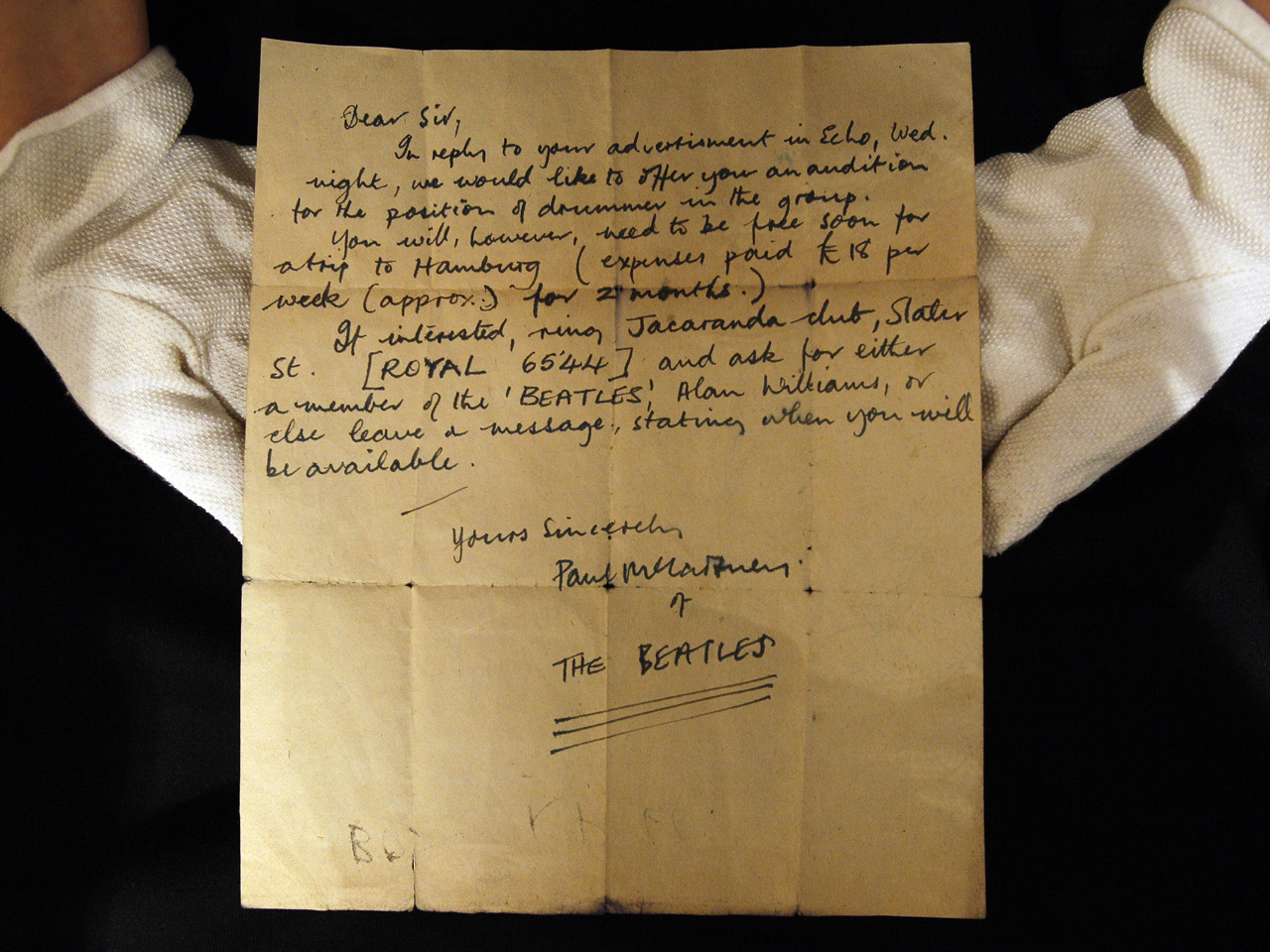 (CBS/AP) LONDON - Somewhere, an aging mystery man is probably still kicking himself over a missed opportunity to play drums for the Beatles.

A newly discovered letter found folded in a book at a Liverpool yard sale has shed new light on the Fab Four's early days, revealing that Paul McCartney offered an audition to a drummer in 1960, just a few days before the band left for a formative two-month gig in Hamburg, Germany.

The letter, which has surprised Beatles scholars, is set to be auctioned next month by Christie's. It was written two years before the band bounced drummer Pete Best in favor of Ringo Starr, who arrived just in time to help the Beatles conquer England and then the world.

Handwritten by McCartney and dated Aug. 12, 1960, the letter offers an audition to someone who had advertised their availability in the Liverpool Echo newspaper four days earlier. The unsigned ad said simply: "Drummer-Young-Free."

At the time, McCartney was playing guitar in the band while the late Stuart Sutcliffe handled bass guitar. He offered the drummer an audition with the caveat that if he joins the band he must be ready to travel almost immediately to Hamburg. The Beatles honed their musical chops playing at low-rent clubs in the German city's famed red-light district.

The letter is signed, "Yours sincerely, Paul McCartney of the BEATLES."

It is not known if the drummer came for an audition, and failed to impress McCartney and the others, or if he simply didn't follow up.

Christie's spokeswoman Leonie Pitts said the auction house's Beatles experts are certain that the letter was not an early feeler to Starr, who was a successful drummer with a rival Liverpool band, Rory Storm and the Hurricanes, before he joined the Beatles.

She said auctioneers had not contacted McCartney to ask if he knew anything about the drummer who had placed the ad.

"We think he's on his honeymoon," she said. McCartney married American heiress Nancy Shevell eight days ago. His representatives did not immediately return an AP request for comment.

Christie's auction house said Monday the letter would likely draw more than $11,000 when it is sold Nov. 15, along with other pop memorabilia.

The letter was discovered by a man from Liverpool who has asked to remain anonymous. The auction house said he is a devoted collector of antique coins who regularly checks yard sales.