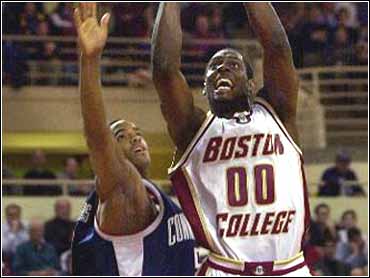 He won't have to worry about the Eagles' egos now.

Troy Bell scored 27 points and Xavier Singletary had 23 on Wednesday night as BC beat the 10th-ranked Huskies 85-68 and snapped a 23-game losing streak against their Big East rivals.

"It's a big confidence booster, even though our confidence is sky-high right now," Singletary said. "I felt we would win this game, but to other people it shows we're a pretty good team."

UConn's dominance over BC (10-0, 1-0 Big East) matched the longest winning streak for one Big East team against another in league history. Syracuse beat Seton Hall 23 consecutive times from 1982-92.

"At least that part you can put to rest," said Skinner, who is only responsible for the last five losses in a streak that dates to BC's last victory on Feb. 23, 1988. "But we still have a long way to go to catch up. We're not even close to the talent that they have."

Boston College is off to its best start since winning 10 straight to open its Sweet 16 season of 1984-85. Students stormed the court after the game to celebrate the Eagles' first victory over a ranked opponent in two years.

"That hurt, when teams rush the floor against you," UConn guard Tony Robertson said. "We really understand now (what the streak means). We've got a target on us."

Freshman Caron Butler had a career-high 29 points and 13 rebounds for UConn (11-2, 0-1), which had won 10 in a row since losing to Dayton in the opening round of the Maui Invitational. The Huskies had 22 turnovers and shot only 37 percent in the second half.

"Their purpose was to beat Connecticut tonight and our purpose was to play. That just isn't how the game works," coach Jim Calhoun said. "I have a great admiration for how they played. I'm a BC fan tonight."

Bell had seven points during the run, including two free throws after the UConn bench was called for a technical foul for complaining about a jump ball the Huskies thought should be a foul. Singletary had eight points in the run, hitting a pair of 3-pointers the second giving BC a 68-52 lead with 7:29 left.

Although classes at Boston College haven't resumed after the Christmas break, Conte Forum saw its first sellout of the season. The crowd of 8,606 serenaded the Huskies with chants of "Overrated! Overrated!"

"The seniors were a little bit hungry about it because this was going to be their last time to get them here," Skinner said. "I really felt that they thought it would be their best shot. So I'm very happy for them."