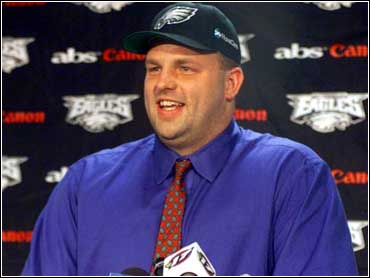 The Philadelphia Eagles signed free-agent Jon Runyan on Monday and made him the highest-paid offensive lineman in NFL history.

"It was going to take something to get me out of Tennessee and here I am," Runyan said. "There's a great feeling around here. The team is moving in the right direction. They stepped up and made the decision easy on the business end."

Runyan, 26, said all along his decision would come down to money. Tennessee offered him a six-year deal in excess of the $27 million package Cleveland gave free-agent tackle Orlando Brown last year, Runyan's agent Ben Dogra said, but the Eagles' offer is significantly more front-end loaded.

"There was no bidding war," Dogra said, adding that the Eagles initial offer was lower than the Titans'.

"Tennessee had an offer to make him the highest paid lineman," Dogra said. "We asked them if they would move on their offer. They probably called our bluff, thinking they would be bidding against themselves."

A Pro Bowl clause could make the final year worth $6.5 million.

"He's the best right tackle in football, bar none," Eagles coach Andy Reid said. "Everything starts with the offensive line. Having that philosophy, he is a key ingredient. He's a big part of this."

"Coming from a beautiful stadium, you have to think quality of life entered into it," Eagles owner Jeffrey Lurie said about Runyan's decision to come to Philadelphia.

Runyan will team with 6-7, 350-pound left tackle Tra Thomas to give the Eagles formidable bookend tackles. He helps solidify an offensive line that has not played well consistently since the early 1980s.

The Eagles introduced Runyan as 16 dignitaries, including officials from the city, team and corporate partner NovaCare, prepared to break ground on the 21.5-acre plot of land. Runyan donned a hard hat and grabbed a shovel during the ceremony.

The Eagles are still waiting for City Coucil to approve a stadium deal.