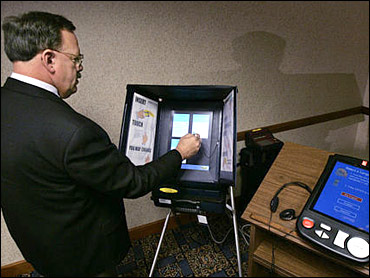 This fall, 30 percent of us will cast our votes by touching a screen on a computerized voting machines. No muss, no fuss - and no chads.

This year, instead of being handed a ballot, some of these voters will receive a smart card.

"They simply touch the name of the candidate that they'd like to vote for," says Alfie Charles, a spokesman for Sequoia, the second-largest voting-machine maker.

Simplicity is only one of the virtues.

"It prevents voters from over-voting, it prevents or notifies voters if they under vote, it also allows them to see all the selections they've made before casting a ballot," says Charles.

You can even vote unassisted if you can't read, you don't know English, or you're blind.

"Voters are delighted with the system," he says. "We have completely accurate results, so we're very high on the system."

California's experience was nothing like Maryland's, according to Secretary of State Kevin Shelley.

"There was a wholesale breakdown in the election last March in one of our major counties that most Americans are familiar with, San Diego," says Shelley. "And untold thousands of individuals were turned away and denied their right to vote because the voting equipment couldn't start."

So many of the machines malfunctioned or ran unapproved software that Shelley took the extraordinary step of decertifying them.

Then there's the software worry. Avi Rubin, a computer-science professor at Johns Hopkins University, spent two weeks analyzing the software from the world's biggest voting-machine company, Diebold Election Systems, which has over 50 percent of the market.

"We found all kinds of problems in the code," he said. "A computer scientist can look at program and immediately tell you if it was written by professional programmers who know how to do software engineering or if it was just put together by a bunch of hacks. And, upon looking at the source code for Diebold, it was pretty clear that this was a real amateur job."

"There were a lot of issues that were brought up in that study that, quite honestly, were very flawed," says director of marketing Mark Radke. "One of the issues in particular: the report constantly talked about hacking into our system via the Internet, when it is never connected to the Internet."

Diebold did fix a few of the problems that Rubin found, like an unchangeable master password that was the same in every machine. But that's the least of Rubin's worries.

"The concern that I have is not that somebody will tamper with the machine on Election Day and change the outcome. The concern I have is that those machines will be programmed from the start to favor one candidate over another and not to actually record and count the votes," says Rubin.

A Diebold plot to rig the elections? Where did that idea come from? The rumors began with this letter from Diebold's CEO, Wally Odell, who was moonlighting as a Republican fundraiser. In his invitation to a benefit for Bush last August, he wrote, "I am committed to helping Ohio deliver its electoral votes to the president."

After a public outcry, Odell announced in May that he was getting out of politics.

"Our CEO Wally O'Dell's position from a political standpoint really does not reflect at all in our equipment or the functionality of our equipment. It has nothing to do with how elections are run," says Radke.

But Rubin says he is not accusing Diebold of rigging elections. "I'm just saying that they could do it and that we shouldn't allow our elections to be under control of vendors when there are ways of designing voting machines such that the vendors don't have the control of them."

Security risks, reliability problems, a potential political bias of the manufacturers and, by the way, no way to conduct a recount in a close election. It's enough to make you thoroughly depressed.

But there may be a very simple solution to all of these concerns. It's called a paper trail.

"My legislation calls for a paper record that each voter gets to see before submitting the vote electronically. And then when the voter submits - you know - looks at this and says, 'Yep, that's my vote,' and submits the electronic vote, this paper record is stored. Should there be a recount, a need for an audit, that will be available to determine what the voter intended to do and whether it was recorded properly."

The paper-trail idea is a hit with everyone from Rep. John Lewis to Ben Cohen, of Ben & Jerry's ice cream.

Lewis says, "Thirty-nine years ago..., I walked across that bridge in Selma, Ala., for the right of all of our citizens to become participants in the democratic process… What happened in Florida must never, ever happen again in America."

The manufacturers say they're happy to add printers to the machines - for about $700 apiece. But the experts, including Sequoia's Alfie Charles, say it won't happen by this fall.

"Taking all of the machines down, retrofitting them, all while they're still trying to prepare for the November election - you know, a presidential election year is a daunting task without any changes. To add changes and complexity on a compressed timetable prior to an election of that magnitude is really risking problems that I think we all want to avoid," says Charles.

This fall, 50 million Americans will cast their votes on touchscreen machines. Is there still time to reach a solution to all of this chaos and controversy?

Avi Rubin isn't optimistic. "I think we've dug ourselves a huge hole for November. And I think we should focus on the future. Make sure that in '06… we've ironed out all the problems and we haven't put ourselves in the position where the vendors can pick our next president."

"Cynicism eats at democracy," says Holt. "Self-government works only if we believe it does. And the 2000 election was a real blow."

"If we don't get it done by this November, and there are lots of irregularities," he says, "I'm afraid it will be another win for cynicism, and that it will take democracy down another notch."

If there's any good news at all, it's that all this bad news has put this year's election under more scrutiny than the Hope diamond. Maryland will be introducing random surprise spot-checks at the polling places, and half the contested machines in California have already been fixed and re-certified.

"We won't allow the technology to be used unless these things are met: Poll worker training. No wireless communication. Parallel monitoring. Option of voting on paper. Basic security measures," says Maryland's Secretary of State Shelley

Even so, this fall's election might be a little rocky. But like it or not, there's no turning back. America has entered an age when you won't just vote with your head and your heart. From now on, you'll also be voting with your finger.