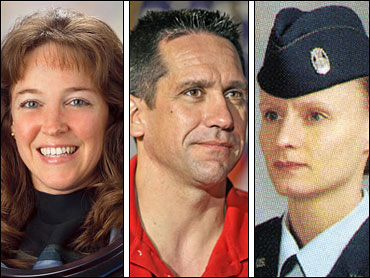 NASA astronaut Lisa Nowak's bizarre 969-mile road trip to confront a romantic rival may have been sparked when she uncovered steamy e-mails sent to her boyfriend by the other woman, documents released Monday showed.

Nowak had collected more than a dozen e-mails sent to her one-time boyfriend, space shuttle pilot Bill Oefelein, including one he received during his shuttle mission, according to the documents, released late Monday by the Orange-Osceola State Attorney's Office.

"Will have to control myself when I see you. First urge will be to rip your clothes off, throw you on the ground and love the hell out of you," Air Force Capt. Colleen Shipman wrote to Oefelein while he was aboard shuttle Discovery in December. "But honestly, love, I want you to totally and thoroughly enjoy your hero's homecoming."

Police have said Nowak, 43, raced more than 900 miles in her car from Houston to Orlando on Feb. 5, wearing an adult diaper so she wouldn't have to stop, to confront Shipman, 30. Nowak donned a wig and trench coat, then sprayed a chemical into the woman's car when Shipman wouldn't let Nowak in, police said.

Nowak was charged with attempted kidnapping and burglary with assault last week. She pleaded not guilty on all counts, and her attorney has promised a vigorous defense. Prosecutors declined to file an attempted murder charge recommended by police.

A written arraignment has been scheduled for March 22, at which time pretrial and trial dates will be set.

Since her arrest, Nowak has told police that her relationship with Oefelein was more than a working relationship but less than a romantic one. But Oefelein, 41, told investigators they had been romantically involved since 2004. They broke up shortly after New Year's Day.

However, Oefelein met Shipman in November 2006 during a training exercise at Kennedy Space Center and they began dating shortly afterward, police said. He told police he had given Nowak a key to his Houston apartment as well as his password for access to his home computer.

"I told him that it made me very uncomfortable and it made me want to pull away from this relationship 'cause it made me think that he didn't quite cut ties maybe," Shipman said in her statement.

A few days later, after a date, they were lying in bed and Oefelein called her "Lisa," she told police.

Nowak flew on Discovery last summer and won praise for operating the shuttle's robotic arm. NASA relieved her of all mission duties after her arrest and placed her on a 30-day leave, which is up this Thursday.

NASA has not said what her status will be when the leave is up.

She had been scheduled to be the ground communicator with the space shuttle Atlantis crew that is scheduled to launch on a mission to the international space station no earlier than late April.