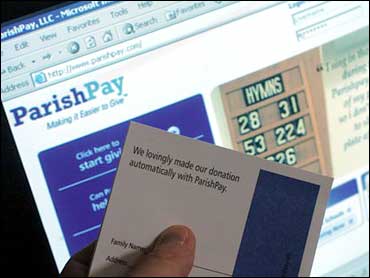 For Bob and Theresa Cudequest — devout but busy Catholics — technology truly is a blessing.

Instead of digging through their wallet for cash or hurriedly writing a check or missing a payment altogether when they can't make it to service, the couple simply has their monthly church offering deducted from their bank account.

"It's one less thing to think about as we're running out the door to church," said Theresa Cudequest, 40, who along with her husband and four kids belongs to The Church of the Presentation in Upper Saddle River.

The Cudequests are part of a growing wave of American parishioners who are paying their church offering electronically. The practice has raised some eyebrows among critics who say it can lead churches to emphasize money over attendance. But churches who encourage this type of giving credit it with stabilizing their income.

More and more churches are working with companies so that members of their congregation can have their offerings deducted directly from their bank account or charged to a credit card.

The Newark Archdiocese recently sent out letters to all of its 230 parishes in northeastern New Jersey introducing them to the idea of electronic giving.

Tinder all the rage in Sochi Olympic Village, say snowboarders

For the past two years, The Church of the Presentation has been working with ParishPay LLC, a Manhattan-based company that works with about 2,000 U.S. parishes.

Another company that provides similar services is Minnesota-based Vanco Services, which contracts with nearly 6,500 congregations nationwide.

The companies usually make their money by charging a fee per transaction and sometimes a setup fee as well. The church saves money by not sending parishioners envelopes that they use to put cash or checks in the collection bowl.

Churches like electronic giving because it stabilizes their cash flow. It helps minimize dips in collections during the summer when families go on vacation, or when attendance is low because of inclement weather.

For Catholics, who historically have lower donation levels than other denominations and fund almost all their activities through the money placed in the collection plate, having parishioners on a steady donation system is almost revolutionary.

Dennis Corcoran, director of operations for The Church of the Presentation, said he decided to explore ways the parish could stabilize its income after asking the church's finance council how they came up with a budget: "They joked with me and said 'We sit in a room and burn incense and throw a number up in the air."'

About a third of the church's 1,100 households who regularly attend service have signed on to give electronically, Corcoran said.

When these services first came out, parishioners and church personnel had their concerns. Namely, is this OK with God?

Corcoran said spiritually there's nothing wrong with electronic giving and it's a natural progression for the church.

"There was no monetary gifts back in the early church," he said. "You donated a goat or a chicken. It was a huge leap when they went to putting a check in the collection basket."

One of the biggest concerns for parishioners and church officials has been the feeling of letting the basket pass by as the congregation watches. The companies usually give the congregations envelopes or post-it notes that can put in the collection basket in lieu of cash or check.

In today's society where many Americans carry significant credit card debt, some churches are hesitant to offer congregants another way to run up their bill.

The Catholic Church, the largest in the U.S. with 67 million members, is potentially the biggest user of electronic giving in America. But other churches are exploring the option as well.

Vanco Services says it has also signed up Lutheran, Methodist, Mennonite, Presbyterian and Baptist churches as well as a few synagogues. ParishPay has focused mainly on Catholic churches but also has clients in other denominations, including Greek Orthodox and Episcopalian.

Not everyone looks on electronic offerings as heaven-sent. Jack Wilkerson, vice president of business and finance for the Southern Baptist Convention's Executive Committee, said the convention does not have an official position on electronic donations, but he has some reservations.

"The system is not the problem," Wilkerson said. "The problem that we're dealing with is irregular attendance to the local church."

He feels religious organizations are trying to address a drop in attendance and funding by introducing new technology instead of finding ways to get more people in their pews.

In the Cudequests' case, something that started out as a simple matter of convenience also became a way to have a stronger connection with their faith. Theresa Cudequest said the electronic donation helps them plan and make giving a priority, rather than deciding how much to give as the basket passes each week.

"This parish offers so much to us as a family that ParishPay is a very simple way to give back," she said.