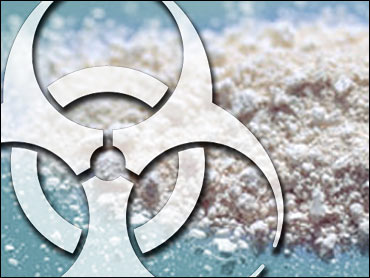 The FBI was draining a pond Monday in a search for evidence of how anthrax-laced letters were assembled in the deadly 2001 attacks, drawing work crews with heavy equipment to a municipal forest to begin the work.

The FBI's Washington field office issued a statement saying that its agents and Postal Service agents were conducting "searches related to the investigation of the origin of the anthrax-laced letters" mailed in 2001.

"The purpose of these searches is to locate and collect items of evidence related to the attacks," the statement said. "To facilitate the search activity, one pond will be drained."

The FBI said it was coordinating the work with city and state agencies. The city said the FBI had hired an engineering firm to drain the one-acre pond, which holds about 50,000 gallons of water, in the municipal forest that is part of the city's water supply system. It said the work was expected to take three to four weeks.

A roadblock kept nonresidents out of the wooded area, which contains hiking trails. From the air, about a dozen workers could be seen around the pond, and a backhoe appeared to be digging a channel for water.

At least six dump trucks rumbled to the area during the morning, and dark sedans and law enforcement vehicles were parked in the forest.

The spring-fed pond was among the first of about a dozen that divers searched in December and January.

The idea to drain the pond stems from an FBI theory revealed May 11 by The Washington Post about how the person behind the attacks could have packed the deadly spores into envelopes without being infected or leaving traces in homes, buildings or on open land.

The Post reported that items recovered from one of the ponds during the winter included a clear box, with holes that could accommodate gloves to protect the user during work, the Post reported. Also recovered were vials wrapped in plastic.

For protection against airborne bacteria, a person could put envelopes and secured anthrax powder into the box, then wade into shallow water and submerge it to put the bacteria into the envelopes underwater, some involved in the case believe, the Post said. Afterward, the envelopes could have been sealed inside plastic bags to be removed from the underwater chamber.

Some investigators said the water theory is the result of the FBI's interest in Steven Hatfill, a physician and bioterrorism expert who formerly worked as a researcher at the U.S. Army Medical Research Institute of Infectious Diseases at Fort Detrick in Frederick. That facility is the primary custodian of the strain of anthrax found in the envelopes sent to the victims.

Attorney General John Ashcroft has described Hatfill as "a person of interest" in the investigation. Hatfill has denied any involvement.

The anthrax attacks 19 months ago killed 5 people and sickened 17 others who were infected by anthrax-laced mail.