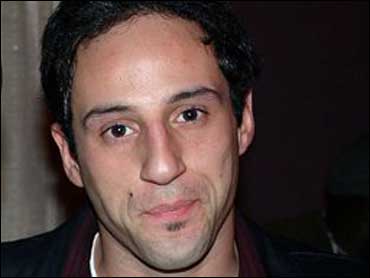 A young police officer dying from a bullet to his chest shot two burglars early Saturday, one of them identified as an actor who played a misfit mobster on "The Sopranos."

Officer Daniel Enchautegui, 28, collapsed in the driveway of his Bronx home and died shortly afterward.

The wounded suspects were quickly captured. Investigators identified one as Lillo Brancato Jr., an actor who got his break in the Robert De Niro-directed film "A Bronx Tale" in 1993, and played doomed mob wannabe Matt Bevilacqua during the 1999-2000 season of "The Sopranos."

Brancato, 29, of Yonkers, was also arrested in June for alleged heroin possession.

Police Commissioner Ray Kelly said the actor and another man were breaking into a vacant home when Enchautegui, who had just finished a late-night shift, heard the sound of smashing glass next door.

Enchautegui was off duty and in his street clothes, but he alerted his landlord and dialed 911 to report a possible burglary in progress. Then he grabbed his badge and a gun and went out to investigate.

The alleged gunman, Steven Armento of Yonkers, was shot four times and was in serious condition. Brancato, who police said was unarmed, was shot twice and was in critical condition.

Police said Armento had a lengthy history of arrests on weapons, drugs and burglary charges, and was running with the murder weapon when an officer spotted him near Enchautegui's home and ordered him to stop.

Because of their injuries, there were no immediate plans to arraign the suspects, said Steven Reed, a spokesman for the district attorney. He said he had no information about whether the suspects had lawyers who could comment.

Enchautegui, who was single and had been on the force for three years, was the second officer to die in the line of duty this year. Officer Dillon Stewart was shot in the heart Nov. 28 during a car chase; a suspect has been charged with murder.

"This is a loss to the department and the city," Mayor Michael Bloomberg said. "We now have another life to mourn, taken from us for no sensible reason."

Kelly praised the slain officer for his "incomprehensible courage."