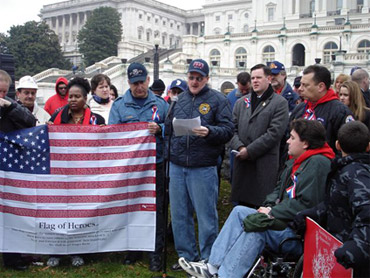 John McNamara, who spent 500 hours in the rescue and recovery effort at the World Trade Center after Sept. 11, 2001, died on Aug. 9 of colon cancer.

He was diagnosed with the disease in the aftermath of his work at ground zero. His family and colleagues say his illness was caused by his exposure to the toxic air at the disaster site.

Though he had full health coverage, McNamara spent his final months lobbying for better benefits and health care for other sick 9/11 responders.

The James Zadroga 9/11 Health and Compensation Act, which was introduced in the Senate in June, would provide $12 billion in medical treatment and monitoring to 9/11 responders exposed to the toxic dust at ground zero.

The bill, named for an NYPD detective who died of a respiratory disease after working at ground zero, would reopen the Victim's Compensation Fund, which expired in 2003 - well before some of the most serious diseases began to manifest themselves.

A nearly identical version of the Zadroga bill was also introduced in the House. On the brink of the eighth anniversary of Sept. 11, 2001, neither piece of legislation has passed.

Earlier this year, McNamara was forced back to the hospital with another malignant tumor. Photojournalist Allan Tannenbaum shot this video of the firefighter, who detailed his deteriorating condition and again urged Congress to pass the Zadroga bill.