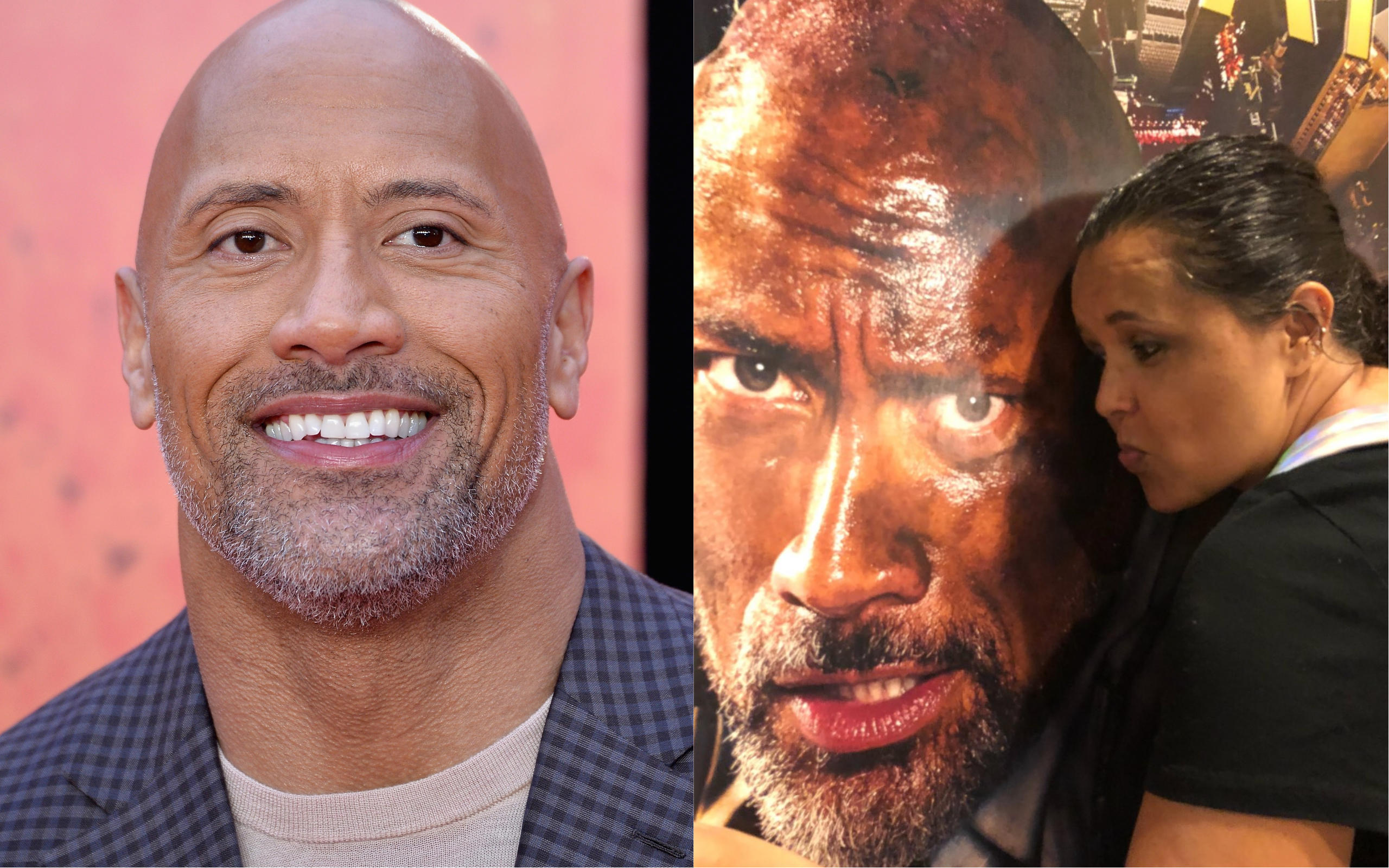 A young man who lost his mother and sister in a devastating car accident in San Diego says he knows his mom is smiling down on him — thanks to the kindness of her favorite movie star. Dwayne "The Rock" Johnson heard Angelo Pizarro's mother was a big fan of his. So the wrestler-turned-actor recorded a special message for her funeral.

On Saturday, Pizarro tweeted a photo of his mom, Aileen, posing with a movie poster with Johnson's face on it. "My beautiful mom who passed away loved @TheRock so so SO much," the 19-year-old wrote. "I'm trying to get him to do even a video saying her name for the funeral. If you could retweet the crap outta this for him to see it that'd mean the world. Thank you!"

Pizarro's call to action worked. Johnson saw the tweets and sent the grieving young man a direct message with a personal video message.

"Hey Angelo, Dwayne Johnson here. And I had  turned on my phone and saw a flood — thousands and thousands of tweets had come through — informing me about the devastating loss you and your family are going though with your sister and your mom," Johnson said in his direct message to Pizarro, which the young man later shared publicly on Twitter.

"And I believe from what I'm told, your mom was a very, very big fan of mine," Johnson continued. "So, anyway man, I am sending you so much love and light and strength your way, from my family to yours."

"I just want to say thanks for reaching out, man. And I'm so sorry to hear about your sister and your mom and this tragic loss that you and your family are going through," at this point, the actor wipes his eyes, appearing to tear up at his heartfelt message for the teen who lost two close family members at the same time. "And, if your mom could see me now, which I'm sure she can, I just want to thank her for all the love and being such a big fan."

Pizarro was extremely grateful that the movie star took time out of his busy day to personally record a message for his mother's funeral. "THANK YOU SO MUCH SIR," the teen tweeted after receiving Johnson's video. "I hope everyone knows how amazing you are. I can't stop smiling knowing she's smiling so much. Just, thank you. And again thank you to every single person who viewed my post (now over a million)."

The story gained widespread attention and Johnson responded to a tweet about his good deed, saying it was the least he could do.

The funeral for Pizarro's mom and little sister, Aryana, will be held on September 8, Pizarro said on social media. He also said that the Rock's message will not be the only special video shared at the service.

Singer Alessia Cara responded to Pizarro's request for a message honoring his sister. Pizarro shared a screenshot of his direct message from Cara which included a video and a heartfelt message. "I am so, so sorry. hopefully this helps you in any way," the singer wrote.

Local reports say Aileen and Aryana Pizarro were killed in a high-speed crash with a wrong-way driver on a Southern California interstate. CBS San Diego reports the other driver has been identified as 18-year-old Trevor Heitmann, who was also killed. Heitmann was a YouTube star known online by his nickname, McSkillet.

Pizarro wrote on a GoFundMe page how difficult the loss of his two loved ones has been on his family. "During this time, me, my grandfather, and brother are trying to come to grasp with our new reality and push forward with our lives. This GoFundMe is to help aid my family with funeral costs and any additional expenses related to Aileen and Aryana's deaths!" the teen wrote.

The responses from his mom's favorite movie star and his sister's favorite singer temporarily eased Pizarro's pain. As he said in his response to The Rock, the teen knows his mom is smiling — and that makes him smile, too.