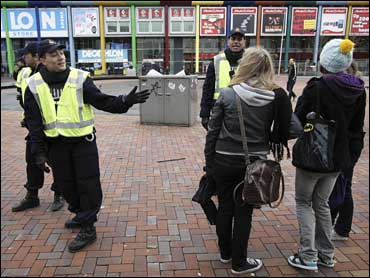 Dutch police have arrested seven people suspected of preparing a terrorist attack in Amsterdam, including a relative of one of the attackers who died in the 2004 bombings in Madrid.

Mayor Job Cohen said police were acting on an anonymous tip that warned an Ikea outlet or other stores in the southeast of the city might be targeted.

"It wasn't a regular bomb warning, but a warning of a planned action aimed at creating casualties in shops," Cohen said late Thursday.

"Men were planning to put explosives in the shops and wanted to cause casualties in busy places," he said.

Police received the tip Wednesday night from an unregistered cell phone in Belgium. The tip also included names of one suspect and locations for police to search.

Early Thursday, authorities shut down a major Amsterdam shopping street near the ArenA soccer stadium and sealed off the nearby Ikea store. A concert by the American band "The Killers" was canceled.

District Attorney Herman Bolhaar said six men and one woman, aged 19-64, were arrested in Amsterdam. All are Dutch nationals of Moroccan ancestry.

"As far as we can tell, none involved has a history of terrorist involvement," he said at a news conference, though one suspect is related to "a person who exactly five years ago was involved in the attack in Madrid."

Police Commissioner Bernard Welten said the suspect's relative died shortly after the Madrid attacks "as a result of a suicide action."

Names of the suspects were not released.

Law enforcement officials in Belgium and the Netherlands have raided a number of houses in the investigation. Police declined to say whether any explosives were found.

The Dutch anti-terrorism coordinator's office said national threat levels had not been changed as a result of Thursday's events.

Welten said he believed the arrests had "reduced the immediate threat" of an attack in Amsterdam, but that further arrests could not be ruled out. He said the area around the Ikea store was likely to remain sealed Friday.