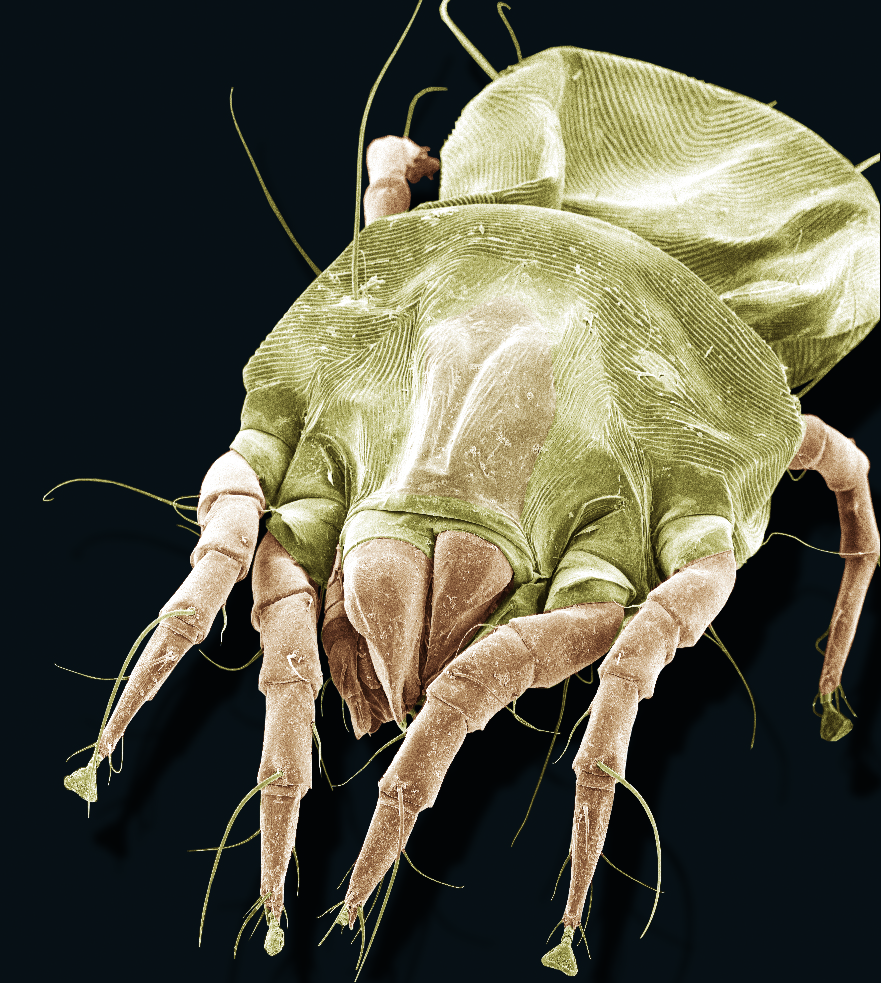 Dust mites appear to be quite the jet setters.

A new study finds that populations of these microscopic critters in the United States and South Asia are genetically linked. The reason, according to Pavel Klimov, a co-author of the study and an assistant research scientist in the ecology and evolutionary biology department at University of Michigan, is that the eight-legged bugs have a propensity for hopping intercontinental flights.

"What people might not realize when they board a plane is that they can share the flight with a myriad of microscopic passengers -- including house dust mites -- that take advantage of humanity's technological progress for their own benefit," said Kimov, whose study appeared this week in the journal PLOS One.

"House dust mites can easily travel on an airline passenger's clothes, skin, food, and baggage," he said. "Like humans, they use air travel to visit new places, where they establish new populations, expand their ranges, and interact with other organisms through various means."

Naked to the human eye, dust mites are all around us. They thrive on the dead skin that people shed daily and can be found in the millions in the pillows, mattresses, sofas, and carpets of even the cleanest homes. Unlike bed bugs, they don't bite, and they don't carry disease, but the spread of dust mites does pose health problems. Today, house dust mites are blamed for causing allergic reactions in more than 65 million people worldwide. The Asthma and Allergy Foundation of America estimates that dust mites may be the most common cause of year-round allergies and asthma.

The dust mite researchers focused their attention on the American and European house mites since they are found around the globe. In their findings, the mites from the United States genetically matched those in homes in Pakistan.

"What we found suggests that mite populations are indeed linked through migration across continents, though geographic differences still can be detected," said another co-author of the study, Rubaba Hamid Shafique. "Every time a mite successfully migrates to a new place, it brings its own genetic signature that can be detected in the resident population a long time after the migration event."

The study is the latest to show that an increasingly connected world is having profound impacts on the natural world, from the spread of invasive species to the evolution of others.

Exotic plants and reptiles arrive on our shores through mail order shopping, wood packing material and hidden in vegetation via the nursery trade. Most problematic is international shipping, where upwards of 10,000 species including zebra muscles and the European green crab have been transported onto American shores via ballast water.

"Humans have been transporting organisms around for as long as we have been around," Matthew R. Helmus of the Amsterdam Global Change Institute, told CBS News.

"Within the last century with the invention of air travel and increased global trade, the biodiversity of distant parts of the global is increasingly starting to look the same," he said. "Never have we moved around Earth's species more than we have today."

Helmus co-authored a September study in Nature that looks at how shipping in the Caribbean was impacting exotic anole lizards. The study found that trade was a major driver in the diversity of lizards which are common through the Caribbean but have adapted in different ways depending on the islands that they inhabit.

"In the past, before humans, islands that were the most geographically isolated had the fewest species because over-water colonization of islands is naturally perilous," Helmus said. "Imagine a small lizard blown far out to sea on a tree branch, floating wherever the wind and current may take him. The probability that this lizard will ever make it to dry land again is extremely low. Now lizards, and lots of other species -- species that could be economically damaging and noxious -- hitchhike in cargo shipping containers and can travel long distances relatively quickly."

He added that the dust mite study suggests "an intriguing genetic pattern...possibly indicating that these mites have spread as humans have spread across the planet."

"However, this study does not rule out that these mutations arose independently within the locations sampled," he said. "Therefore more work is certainly needed such as estimating the flow of people among locations and testing if the movement of people corresponds to the genetic patterns seen in dust mites."