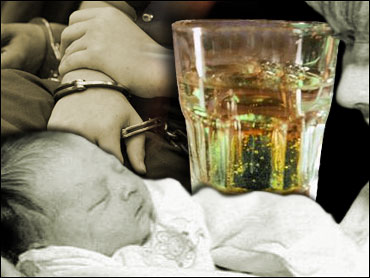 A woman has been arrested on child neglect charges after giving birth while drunk, Oklahoma police said.

Melissa Irene Tanner, 37, of Dewey, Okla., is accused of having a blood alcohol content close to three times the legal limit when she gave birth to a baby girl on June 30. She is being held in jail with bail set at $30,000 and the baby has been placed in foster care.

The baby was not breathing upon birth and had to be administered a medication to counteract any narcotics that may have been present in the child's system. After an emergency procedure by hospital staff, the child started breathing.

Tanner was brought to the hospital after falling off her porch, police said.

According to a July 11 probable cause affidavit filed in the case, Tanner told police she and another person had consumed a case of beer, and she did not know she was pregnant. Tanner reportedly has six other children.

Tanner reportedly told police that she considers herself to be an alcoholic, and, according to the affidavit, she said she was intoxicated twice a week during her pregnancy.

A doctor's report indicated the child is suffering symptoms indicating that it is addicted to alcohol and could have Fetal Alcohol Syndrome, which the Centers for Disease Control and Prevention lists as the leading preventable cause of mental retardation and physical deformity.

The extent of the damage, if any, may not be known until later in the child's life, but the doctor's report indicated that the child's features were consistent with fetal alcohol syndrome, reports the Bartlesville Examiner-Enterprise.

Children with fetal alcohol syndrome can have serious lifelong disabilities, as well as difficulties in school and trouble with the law, says the CDC.

According to the affidavit, the child was moved from one foster home to another due to "incessant crying," until the girl was placed with a caretaker with experience with addicted infants.

The Examiner-Enterprise says Tanner has previous convictions for domestic abuse, violation of a protective order, resisting arrest and public intoxication.