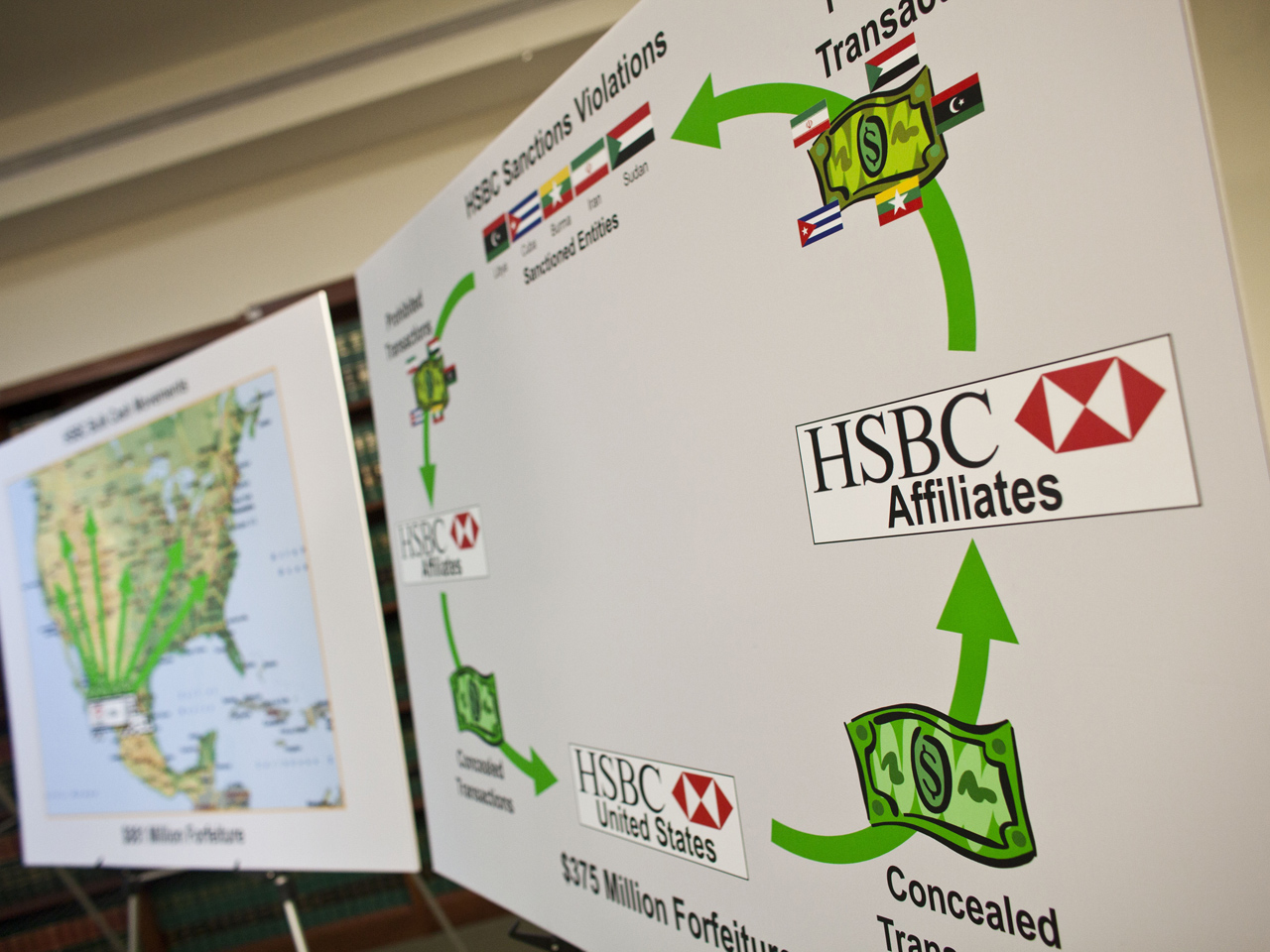 (CBS News) As bank slogans go, they don't come worse than this: "The preferred financial institution of drug cartels and money launderers."

That's a quote Tuesday in a U.S. Department of Justice report about HSBC Holdings, one of the largest banks in the world.

To avoid criminal prosecution, HSBC admitted Tuesday that it laundered more than $800 million for Mexican drug cartels, and covered up illegal transactions for Burma, Iran, Sudan, Cuba, and Libya.

Those nations were under banking sanctions because of human rights atrocities, terrorism, or -- in Iran's case -- a nuclear program.

The British bank will pay $1.9 billion to the U.S. government, the largest such fine in history.

It's a case that has everything -- everything accept an arrest. That struck some as odd, because in 80 pages of court documents, the bank admits to almost going out of its way to act as a financial clearing house for international pariahs and drug dealers.

HSBC officials listed Mexico in its lowest risk category for money laundering during a four-year period when Mexican drug cartels were funneling over $700 billion through the bank.

U.S. Attorney Loretta Lynch said: "The investigation revealed that staggering amounts of cash, hundreds of thousands of U.S. dollars daily, were being deposited into HSBC Mexico using boxes specially made to fit through tellers' windows to speed the transactions."

It wasn't just the cartels that benefited from what prosecutors called the HSBC's "willful failure" to report suspicious activity. HSBC instructed an Iranian bank how to conceal $183 million in transactions. HSBC also admitted to cutting the number of internal watchdogs to save money.

Assistant Attorney General Lanny Breuer said: "HSBC is paying a heavy price for its conduct, and under the terms of today's agreement, if the bank fails to comply with the agreement in any way, any way at all, we reserve the right as the government to fully prosecute it."

Under the terms of Tuesday's settlement, nobody at HSBC will face criminal charges.

Notre Dame professor Jimmy Gurule, who investigated money-laundering cases for the Treasury Department, said: "We're not talking about mere negligence. We're talking about a criminal scheme that was adopted as a policy of HSBC that involved looking the other way in regard to suspicious transactions involving money laundering."

Some would say that the message is, if you break all the laws you can, until you get caught, you may have to pay a lot of money, but you're not gonna go to jail.

U.S Attorney Lynch, who is one of the architects of Tuesday's settlement, disputed that idea, and said: "That's a very short-sighted view, I think, because in this case they're obviously paying a great deal of money, but they also have to literally had to turn their company inside out. And the message should be that that's what you have to do."

In a statement from its London headquarters, HSBC said it has cleaned house, firing top executives and taking back their bonuses.

Now, the bank has to demonstrate to a federal monitor that they are in compliance with all laws for five years.

As for the lack of criminal prosecutions, the feds said that they never found one bank official, or any collection of bank officials acting together, that were doing this on purpose. They painted a picture of a disorganized bank that was collecting all these fees either not knowing, or not wanting to know where it all came from.

"She was tortured": Mahsa Amini's family speaks out amid Iran protests
John Miller