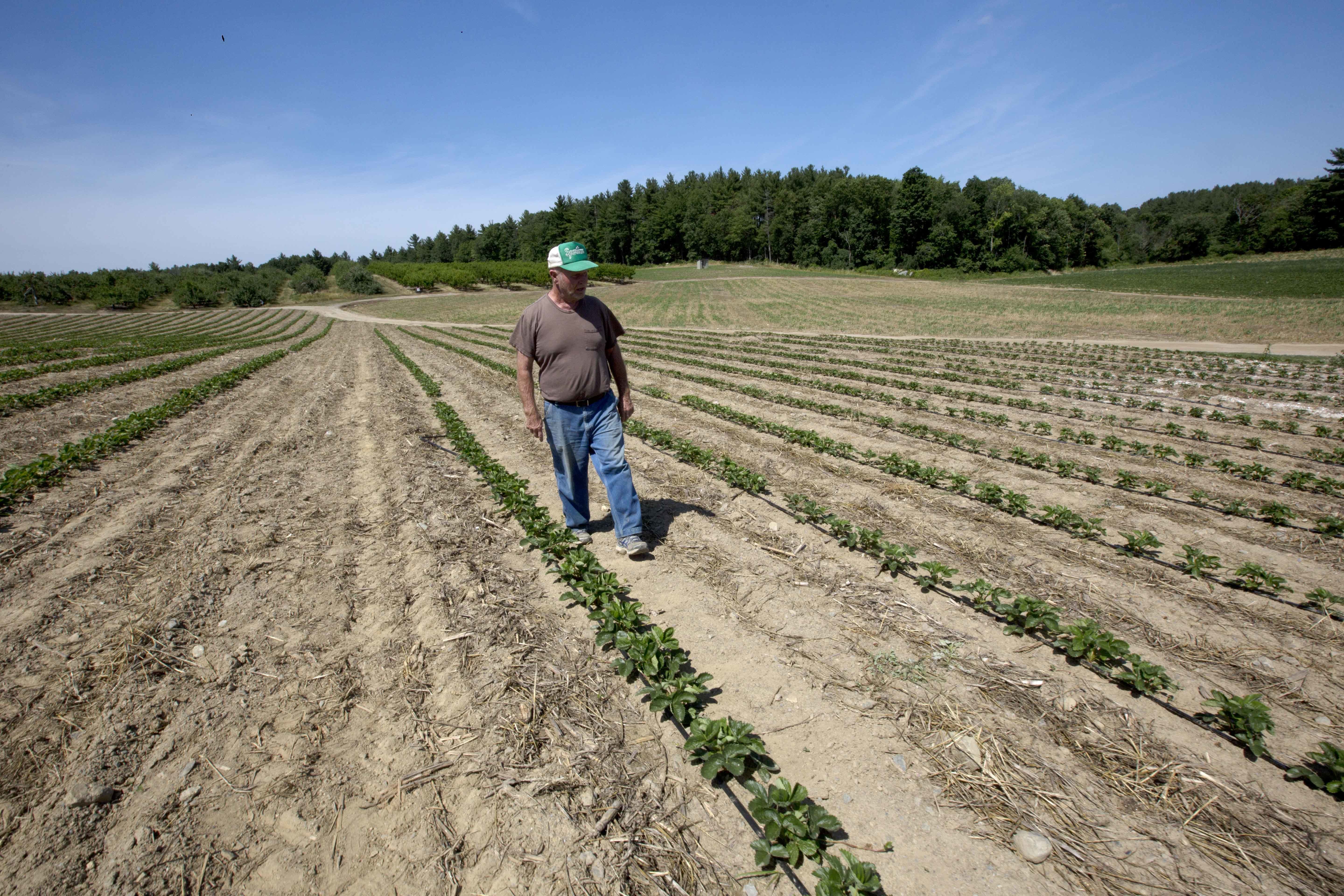 CONCORD, N.H. -- At Lavoie's Farm in New Hampshire, beans and corn haven't broken through the ground yet and fields of strawberries are stunted.

The drought that has taken hold in the Northeast is especially felt at John Lavoie's farm in Hollis, presenting him with some tough choices. Irrigation ponds are drying up, forcing him to choose between tomatoes and berries or apple and peach trees.

Lavoie decided to hold off watering the fruit trees so he could quench the tomato and berry plants before they succumb to the heat.

"We need some rain pretty quick," Lavoie said. "There is just some corn that won't make it. A lot of things we would like to give water to, we can't."

The dry blast in New Hampshire is being felt throughout the Northeast, from Maine to Pennsylvania, driven by a second year of below-average rainfall. Though not as dire as the West Coast drought of five-years running, the dry, hot weather has stressed farms and gardens, prompted water restrictions and bans in many towns and threatened to bring more wildfires than usual.

In the hardest hit areas of western New York, Massachusetts and southern parts of New Hampshire and Maine, it's been dryer than in a decade or more. And national weather experts predict the drought will persist at least through the end of October.

"The Northeast is a little bit of a mixed bag, but the bottom line is that the conditions have deteriorated over the past several weeks to a couple of months," said Rich Tinker, a drought specialist at the National Oceanic and Atmospheric Administration.

If there were a drought epicenter, it probably would be Massachusetts. More than 74 percent of the state, according to the United States Drought Monitor, is experiencing some degree of drought and almost the entire state is dry.

CBS affiliate WSHM in Springfield, Massachusetts reports on four consecutive days of temperatures at 90 degrees or higher with high levels of humidity and the chance for thunderstorms. A warning of possibly severe thunderstorms is in effect across southern New England, according to the U.S. National Weather Service. But the rain from those storms will not be nearly enough to make up for the ongoing dry spell.

Many Massachusetts farmers are hurting, said Katie Campbell-Nelson, a vegetable production specialist with the UMass Extension. Yields and quality are down, and irrigation costs are up.

"Some farmers are abandoning crops because it's not worth the financial risk of harvesting them," Campbell-Nelson said.

The dry conditions have raised the risk of wildfires in Massachusetts, said Dave Celino, chief forest fire warden for the state Department of Conservation and Recreation. Typically, the state records about 1,600 wildland fires a year. But this year, it's already seen more than 1,000.

Meanwhile, some wells are going dry in Connecticut. And the blueberry crop in Maine will be slightly smaller this year than the past two, said Nancy McBrady, executive director of the Wild Blueberry Commission of Maine.

In New Hampshire, the Lavoies, like their farming neighbors, are spending twice as much and committing 90 percent of their labor to watering. They've instituted drip agriculture and other conservation measures to ensure every drop of water goes farther and lasts longer. It's a smart move, especially since it may be months before they see any relief.

Jet packs in flight and fiction