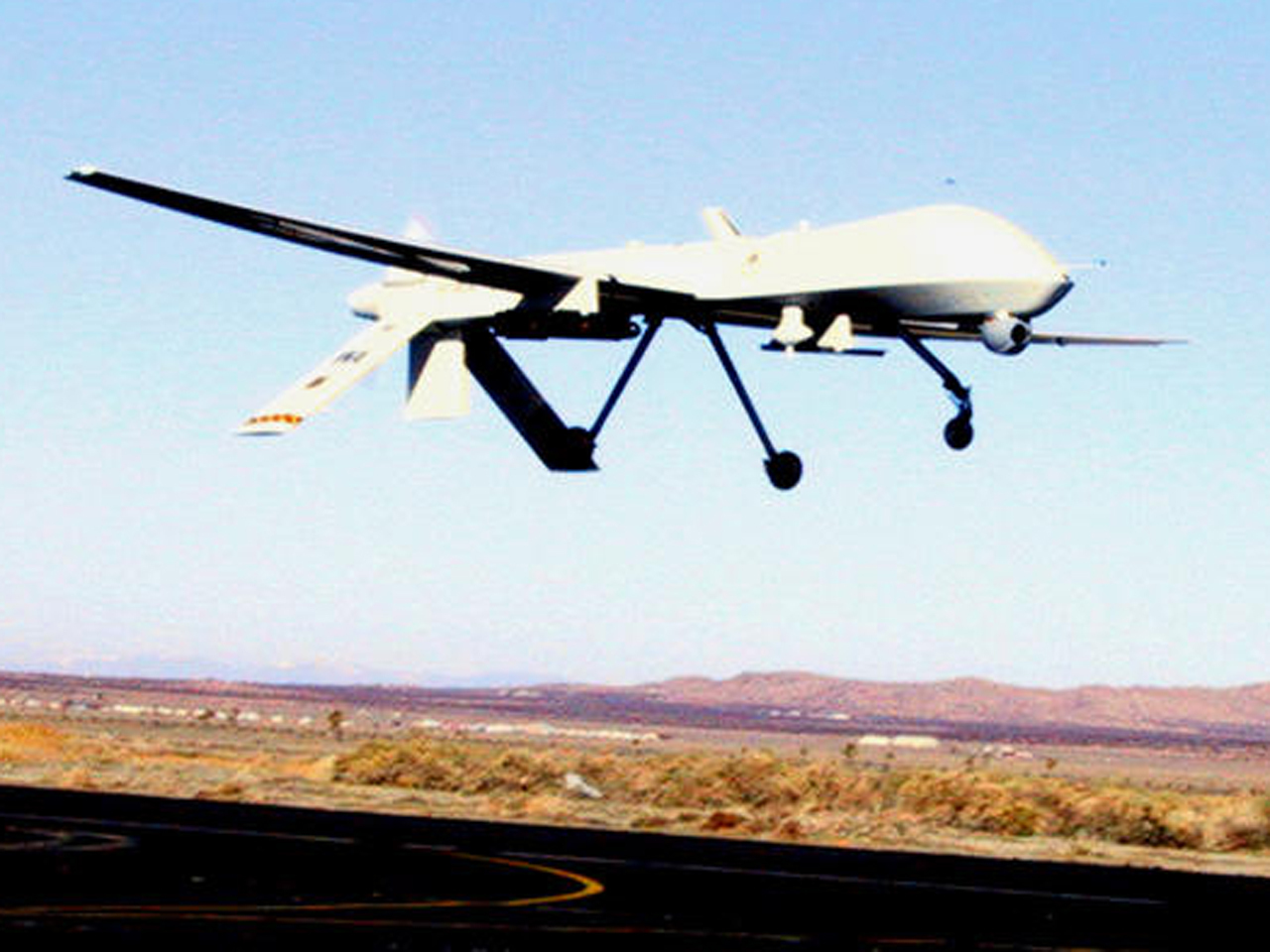 NEW YORK "We only use these authorities and these capabilities as a last resort." - John Brennan, February 7, 2013.

President Obama's nominee to head the Central Intelligence Agency uttered those words as he defended the drone program which he helped build. Drones, along with Brennan's feelings on water-boarding, dominated his recent Senate confirmation hearings. The Senate is scheduled to vote Thursday on his confirmation, and is expected to approve him.

On May 8, 2002, "The New York Times" reported that the CIA, using "a missile fired from an unmanned surveillance drone," tried to kill Gulbudeen Hekmatyier, leader of Hezb-i-Islami (Islamic Party), the second most powerful militant group after the Taliban in Afghanistan. He survived. According to the paper, the attack, "was carried out by a Predator drone carrying Hellfire antitank missiles... a new tactic in the war."

As of March 6, according to the New America Foundation, the U.S. had fired 420 missiles in the tribal areas of Pakistan and, more recently, in Yemen. The frequency has increased tremendously under President Obama compared to the previous administration. The Obama administration has used the drones, with success, to target suspected al Qaeda and Taliban commanders and militants, killing some senior commanders in recent months.

Opponents of the program argue that hundreds of civilians have also been killed by the strikes, including many children, but the U.S. government claims civilian casualties from the strikes has been reduced to almost zero during the past year.

The first time I found myself underneath a drone was late November 2007, in the mountains south of Tora Bora on the Afghan-Pakistani border. It was 10 p.m. and I was sitting in a car on a dirt track with a small group of Afghans, waiting for word from a tribal chief -- in whose hands I had put my life -- that the Taliban, higher up in the mountains on his land, would meet with an American journalist.

Two guards squatted by the car, like birds of prey, their thin wool shawls over them, hiding their rifles. I heard a sound in the sky like a lawnmower engine, a steady buzzing above us to our right. It was a Predator, armed surely with missiles. The modern, high-tech world was intruding up here in the mountains.

"It's been here a few days," whispered Sami, my interpreter. "Everyone knows it's here."

I was afraid of the Taliban and now, of the Predator. I imagined young Americans sitting in a far-away office, staring at a small screen, getting ready to press a button and kill us all before going to lunch. They must have seen our car lights when we drove up here. They were off now. I put my flashlight under my shawl and wrote in my notebook.

After half an hour, a talib, his face uncovered, came out of the darkness and up to the car talking on a walkie-talkie. The talib looked at us and then left. Another fifteen minutes passed.

"All the sub-commanders will be here tonight," said one of our guards. Maybe that was why the Predator was there. I was paranoid that the drone could see us, or that the Taliban, an anti-Western villager, or a spy knew that we were here, and would attack us.

One of the bodyguards asked to see my video camera. "They are suspicious," said Sami. I gave it to them. They played with it and gave it back to me. At 11:00, the chief and his bodyguards, and a Talib, appeared out of the darkness. We all left the car and walked 300 yards up the track to a dusty pickup. It wouldn't start and we pushed it up hill and the driver jump-started it. Sami and I climbed in the cab and our bodyguards climbed in the back and we rode higher up into the mountains.

From behind a huge boulder by the side of the road, a tall man in a brown sweater, crossed-bandoleers and a white turban emerged holding a rifle. His face was covered, with only his eyes showing. On the other side of the rocky dirt track, a man pointed an RPG-7 rocket launcher at us. Another man, next to him, stood behind a rock on which he had placed a PKM Soviet machine gun, his finger on the trigger.

How could they stand up to modern soldiers with these 1980s Soviet weapons? Can't the Predator see all this? The tall man checked my gear and frisked me in the truck's headlights. We climbed back in and drove 200 yards, around a bend, and more armed men stopped us. They too checked our gear and frisked us and used walkie-talkies to communicate with other Taliban. We waited silently and finally they told the driver to proceed. Our bodyguards had to stay behind.

Sami and I climbed into the truck. As we drove on, down a hill now, I felt like I was riding into the valley of death. The Predator was still watching and waiting overhead.

We approached two men, one in black with a black turban, in his late 30s, the other man in his 40s wearing a black and silver turban, a fatigue jacket, and holding a walkie-talkie, sitting on the ground. They put their hands up in the glare of the headlights. Sami and I walked up to them. A dozen young men with covered faces appeared from behind rocks, with rifles or RPGs.

I wondered if they would kidnap us, but they had given their word to the tribal chief, and he had promised to protect me. Sami and I sat facing the leaders, I shivering in the cold and afraid of the Predator, with the headlights shining on us. I was sure a missile would hit us any second.

The leader, Mullah Mateen, wore a wrinkled button down shirt, baggy pants, sandy colored camouflage army fatigue jacket, a dark wool shawl and untied white sneakers. He had a trimmed black beard. I didn't see a weapon. It was my first meeting with the Taliban. It was Sami's first meeting with them in what he called the eastern zone. They had beheaded his friend, and fellow fixer, Ajmal Naqshbandi, and his driver, Sayed Agha, in March in the southern Helmand province.

These men looked and talked like the Mujahideen; young men with wispy beards and thin wool shawls, led by older men, certain in their cause. Each carried a rifle or a grenade launcher and they lived in the mountains. Once, their battle was against the communist forces of the Soviet Union, now it was against the Americans, who had once been their allies against the Soviets.

The truck lights shined on us, lighting up the valley. The Taliban didn't seem to care about the Predator. Could it see my pen and notebook, or my camera? Would the drone operators consider me a traitor and pull the trigger? Would the Taliban kill us? I began the interview.

Sami translated and filmed when he could. After more than an hour I ended the interview. I could no longer hear the Predator. They had watched us and pulled back. It didn't seem that the Taliban were going to kill us, but I wasn't sure. "We live in caves. We have blankets and all that we need," a young man said, smiling, sitting next to me. "We invite you to become Muslim," said the commander. I thanked him, but didn't say anything.

I kept thinking of the Predator, hidden somewhere in the sky, or that the Taliban might do something. "We are in the mountains now, but we will see you in Jalalabad," said the commander. We walked to the truck, and drove with the headlights on down the mountain.

In February 2008, I crossed with a bodyguard and another interpreter into the tribal areas of Pakistan, and we were kidnapped by the Taliban. I was sitting in a dark cell, somewhere deep in the mountains, where no one could find me. One morning, I heard an engine, softer now, larger, smoother sounding, in the sky.

It was a Predator. Was it looking for me or for the Taliban? It hovered above us 15-20 hours every day for the next month or so. Almost every day, men in black turbans came and went holding their rifles. No one mentioned the Predator. I kept waiting for a missile to come screaming down and killing us all.

One night my interpreter looked at me closely, six-inches away, whispering: "Does the Predator have a camera that can see in here?" I said no, but I wasn't sure. Every day I sat in the dark waiting for the missile. I became fatalistic.

I was never allowed to go outside except for a few minutes at night and even then we were kept under a roof.

"No one will ever find you," said my jailer. "We will take you up into the mountains and move you from one place to the next."

In the 1980s I lived in Afghanistan among the Mujahideen. One morning a Soviet MI-24 helicopter suddenly appeared over the mountains and hovered over our baked-mud compound. A man next to me stood shivering against the wall, looking up waiting for the bombs to drop. Crates of ammunition were all around us.

But the Taliban I met in the late 2000s didn't seem to care about the Predator. They, unlike the Mujahideen, were not afraid to go to Paradise. They wished for it. I sat for hours listening to Taliban recruitment tapes. They sang, like a haunting Vienna Boys Choir, goodbye to their mothers.

After I was released, and on a U.S. military base in Jalalabad, I asked the FBI agent in charge of my kidnapping on the ground if the drone overhead had been looking for me, or for the Taliban.

"I brought all assets into play," he responded.

Last April I sat on a Writer's Guild Panel in New York, the subject of which was drone warfare. One panelist, considered an expert on drones, said they had changed warfare, like gunpowder, airplanes and atomic bombs. They could see a milk carton from 50,000 feet. My fellow panelists were all for them. The talk was too easy and antiseptic. It was one thing to sit in a room 7,000 miles away and another thing entirely to be under that buzzing sound, knowing that above you men, or women are looking down and that you are helpless against them.

Jere Van Dyk is a CBS News terrorism consultant and the author of "Captive, My Time as a Prisoner of the Taliban," Times Books, 2010.