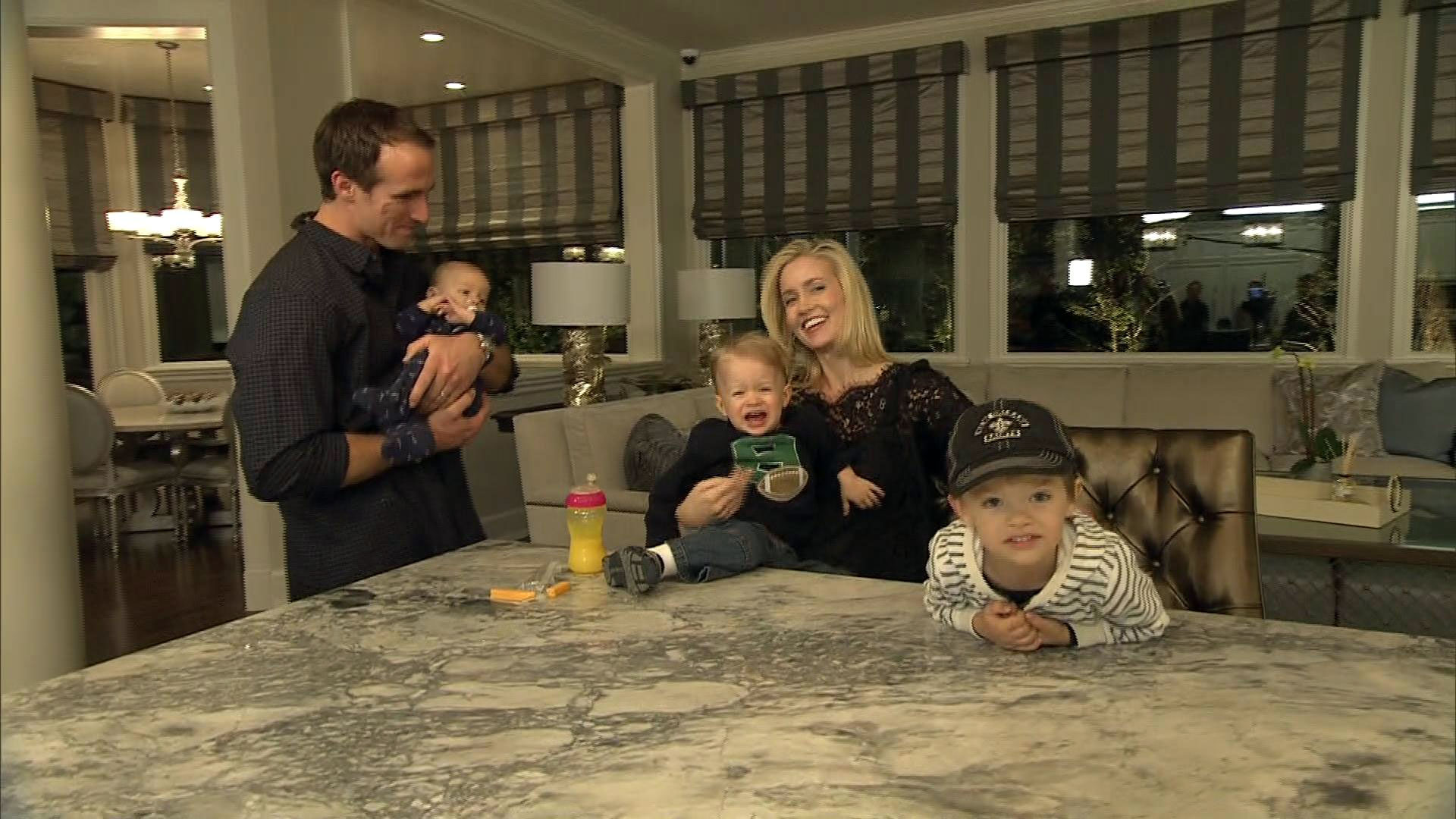 Drew Brees is America's most loved quarterback, according to Forbes Magazine. He's a Saint in more ways than one, coming to New Orleans after Hurricane Katrina, helping bring the city back from the brink and leading his team to an emotional Super Bowl victory in 2010.

Now see the other side of Drew Brees, the family man in the home he shares with his wife, Brittany,and his three little boys.

CHARLIE ROSE: Thank you for inviting us.

BOTH: Come on in.

LARA LOGAN: Brittany, what did you love about this house? Why this one? What did you think when you first saw it?

BRITTANY BREES: You know, I actually-- got the opportunity to look at houses without Drew. He was at the facility--

DREW BREES: She bought it without me.

I just-- I just love the uptown area. I loved, you know, being by St. Charles and -- and having the streetcar go up and down. We're right by a park ... just the feeling of the neighborhood.

DREW BREES: And plus, I think we felt like, you know, this was an area that was hit by the storm, Hurricane Katrina. We were here six months post-Katrina. We felt like this was -- this was doing our part in the community was buying an older home, renovating it, and making it better.

LARA LOGAN: So tell me, right next to you over there is a table with lots of photographs. There's gotta be a wedding picture on there somewhere, right?

BRITTANY: Yeah, there is. This is our wedding picture. We got married in San Diego, actually, in Coronado. And that's us on the beach, right after we got married.

BRITTANY: Yeah, so our 10-year anniversary is coming up.

CHARLIE ROSE: So when you met him, Brittany, he was a big man on campus, as they say. Were you impressed by that?

BRITTANY: He wasn't that big of a man on campus yet (LAUGHS).

DREW BREES: It's actually a funny story. I met Brittany when I was a sophomore and she was a junior. And the first time I met her, I-- well, first of all, I saw her from across the room. And I instantly knew, "I'm gonna marry this woman." I went up to her and made a complete fool out of myself. ... And-- the rest is history (LAUGHS).

LARA LOGAN: When you saw her for the first time? What was it that made you say-- you know, "This is the woman I'm gonna be with for the rest of my life"?

DREW BREES: I think -- well, obviously, she's beautiful. But it was -- it was her presence. It was -- there was something about her. Her aura.

BRITTANY: I think it was more breeding stock (LAUGHS). He wanted me tall--

DREW BREES: -- tall, athletic build. So my boys are gonna get great genes.

LARA LOGAN: So do you two have pictures of your children there on the table, too?

BRITTANY: Yeah, this I-- this is a picture of all-- all three of them. Baylen is-- is the middle one. He's decided he likes to take his clothes off most of the time.

If you saw him, which you will here in a little bit running around ... he's the most active kid you'll ever see. And then Bowen and Callen.

DREW BREES: Callen is three months old. He was born in August during training camp. This was soon after he was born. I -- he was napping on my chest. And I fell asleep as well. And somewhere along the way, we happened to both go into the touchdown pose.

As a father, that -- that's probably one of the greatest - greatest -- feelings in your life is having your -- your baby sleep on your chest.

CHARLIE ROSE: Can we see the rest of your house?

DREW BREES: There's a lot of memories in this room. Each picture ... or ball or trophy or book tells a story -- brings back a memory.

LARA LOGAN: Brittany, you've been there through all of this. I know you have to have something in there from the Super Bowl, because that's one of the greatest moments of anyone's career, right? And you didn't just win the Super Bowl, but you were MVP.

BRITTANY BREES: Yeah, I'm gonna open this up for you. This is Drew's MVP Award. It's pretty special. Here's a cute little picture of us -- Baylen was so amazed with the confetti falling from the sky.

LARA LOGAN: That picture's become very well known. Did you ever think, you know, after everything you two went through with the -- all your injuries, Drew, that coming to New Orleans would lead to that?

And, you know, I was coming off a pretty serious injury myself -- departing San Diego after the 2005 season. I was unsure about the future of my career. ... The city embraced us in such a way -- we feel so loyal and so tied to the city.

But it's moments like this that will live forever, definitely one of the greatest moments of-- of our life, just to share that -- achievement together-- on the podium, at the Super Bowl.

CHARLIE ROSE: You celebrated that moment of Super Bowl victory. We've also seen Bountygate. ... I assume you'd be the first to speak out against so -- any bounty that is intended to be payment for inflicting and taking somebody else out of the game. Because it could happen to you.

DREW BREES: ... Yeah, I mean, but -- I think what we're talkin' about is ... there have been a lot of false accusations in regards to -- what the Saints "bounty" was. And I think-- initially with the NFL's media campaign, I think it was portrayed in a way that, "Hey... these guys are bein' paid to go out and intentionally hurt people." And that -- that was never the case, and it's yet to be proven. Unfortunately, I think the perception has kind of become reality in that regard. But I think that all that will come out in due time. And these guys will be vindicated.

LARA LOGAN: In the midst of all these achievements in this room, there are a number there, Brittany, that say a lot about the kind of man your husband is.

I think those are probably the trophies that I'm most proud of for Drew. We started our foundation, we had been talking about it a lot, but actually started the foundation while we were on our honeymoon. I had gotten food poisoning, unfortunately, in Tahiti. So we had a lot of time to talk.

So it's the Brees Dream Foundation. And we really started focusing on the quality of life with cancer patients.

Then when we moved to New Orleans in 2006, we broadened the scope of our foundation to include the rebuilding effort, helping to rebuild schools, parks, playgrounds, athletic fields, childcare facilities -- help develop afterschool programs. I'm proud to say that in the last 10 years we've been able to raise or commit over $13 million.

And also we have committed $1 million to Hurricane Sandy recovery up in the Northeast. ... And that's what we want to do. We want to be able to give back what's been given to us.

CHARLIE ROSE: Drew, you have an extraordinary coin collection there. Tell me about it.

DREW BREES: Sure. ... Probably the -- one of the most unique and -- and one of the most-- touching for me is this Marine Corps coin from Camp Kinser in Okinawa, Japan.

My grandfather, Ray Akins, was in the 1st Marine Division in World War II. He was in on the invasion of Okinawa, April 1, 1945. And I actually got to go and stand on the beach that he stormed in on. ... And my grandfather's still alive. And I was able to get on a satellite phone and talk to him while I was standing on that beach. And I asked him, you know, "Grandpa, what -- what were you thinking?"

CHARLIE ROSE: Drew -- it's clearly an emotional idea for you. I suspect for many of those warriors, you're a hero. But clearly for you, they're the heroes.

And I always admired -- the fact that he was probably the greatest blend of power and just pure hitting.

The more I learned about him was he played 21 years, but he lost out on four to five years of the prime of his career because of military service. ... I always had so much respect for, I think-- his mindset in regards to serving his country, being the best baseball player that he could be, and I always respected that.

CHARLIE ROSE: Show me what you have ... that is the memorabilia of Ted Williams.

DREW BREES: Two of the other most unique things are his World War II flight log. It logged every one of his flights as he trained for World War II.

"Theodore S. Williams, captain U.S. Marine Corps, I certify to the best of my knowledge, my total time bought -- brought forward in this book is 1,000 hours of flight time." And then he signed it.

I'm truly a fan. It's why I wear the number 9. ... So those are just a few items that I know were part of Ted Williams personal collection and that have special meaning to me.

LARA LOGAN: Drew, your wife says "what you see is what you get" with you. And -- and you wrote about the birthmark that's on your face and the effect that that had on you growing up and why you never wanted to have it removed. Tell us -- what that did to you and how that shaped your character.

DREW BREES: I think every person has something that's unique about them. And, you know -- kids can be cruel, so growing up with a birthmark on your face, that's obviously something that's -- that's very different. And so I got plenty of teasing. And -- you know, bullying growing up, you know, with that kind of thing.

But I never wanted to have it removed, because I felt like it was a part of me. ... And as I got older, especially, people would look at me and say, "I -- I can't -- I couldn't imagine you without it. You know?

LARA LOGAN: And as it turns out, it didn't happen to be a problem with the ladies.(LAUGHS)

DREW BREES: Brittany didn't mind it so much, I guess.

CHARLIE ROSE: This is a remarkable tour of what means something to you. Take us to the family room.

LARA LOGAN: So we're moving into your family room here. ... It's absolutely beautiful.

DREW BREES: What are you doing Byde?

BRITTANY: Oh. (ONE OF THE BOYS SCREAMS)

DREW BREES: They -- (LAUGHS) we might have interrupted the wrestling match between-- Baylen and Bowen.

DREW BREES: Can you say "Welcome to New Orleans?"

BRITTANY: This is Callen.

DREW BREES: And they're -- there's nothing like being a father. It's the greatest thing in the world.

LARA LOGAN: It kind of dwarfs football, huh, when you're a dad?

DREW BREES: There's no doubt. It puts everything in perspective.

CHARLIE ROSE: Do you see any future quarterbacks there, Drew?

DREW BREES: You know what? Actually, I think -- I think this one [BOWEN] -- this one might be our little football player. ... he's kind of the bruiser, at this point.

LARA LOGAN: Brittany, is it true that you still want to have a girl?

BRITTANY BREES: Yeah, I do. Well, I'm outnumbered so much. I think we'll try for -- for one more.

CHARLIE ROSE: Listen, to be able to come to New Orleans, this is really a wonderful way to end it. Because, as we came in, you welcomed us into your house. ... And now we get to see, as we say goodbye -- what life is really like. (LAUGHS)

BRITTANY BREES: If this one spits up, it'd be a perfect ending (LAUGHS).

"Person to Person": Alicia Keys is a girl on fire

"Person to Person": Inside the lives and homes of today's newsmakers