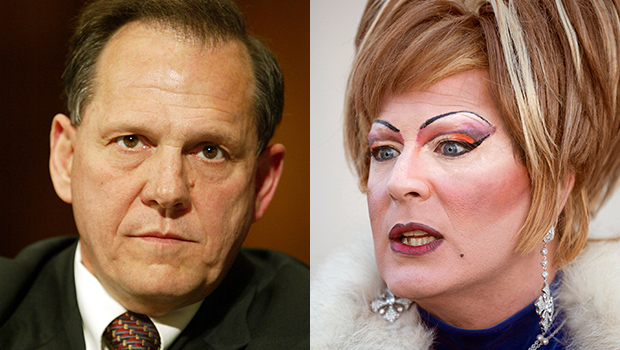 Moore has called out Starling twice by name in recent days while defending himself against allegations of violating judicial canons with his opposition to same-sex marriage. During a news conference and in a written statement, Moore cited the cross-dressing entertainer as a reason he's at risk of losing his job for the second time since 2003.

That's fine with Starling, who helped lead an anti-Moore rally on the steps of the Alabama Supreme Court building in January. Opponents that day filled out more than 40 complaints against Moore, who already was the subject of other complaints and now faces removal from office if convicted of violating judicial ethics.

"If it takes a drag queen to remind you that liberty and justice is for all, here I am," Starling said Tuesday between sips of coffee.

Moore contends the effort to oust him is unfounded and politically motivated.

Born and raised in the southeast Alabama city of Dothan, Starling is a gay man who dresses up like a woman to perform drag shows. Most days, the 43-year-old Starling dresses like a male and goes to a regular job, referring to himself as "he."

But the entertainer prefers the pronoun "she" when dressed as Ambrosia Starling, a stage name for drag shows. Fearful of losing his day job or endangering others in a Deep South state where many gays still fear violence or discrimination, Starling agreed to an interview on the condition that only the stage name was used.

"I have a 71-year-old mother who lives with me that I have to worry about," Starling said. "Her well-being and safety is No. 1 for me."

Starling wore her drag outfit to that demonstration against Moore outside the Supreme Court five months ago. In a long blue dress and light-colored coat, Starling referred to Moore as a bigot and asked crowd members to submit complaints against Moore to the Alabama Judicial Inquiry Commission, which accused the Republican Moore of wrongdoing on Friday, resulting in his suspension.

The complaint filed by the Judicial Inquiry Commission accuses Moore of willfully failing to respect the authority of federal court decisions that cleared the way for gay marriage, which Moore opposes on the basis of faith and the law. He issued an administrative order to state probate judges in January that said state laws against gay marriage remained in place months after the U.S. Supreme Court effectively legalized gay marriage nationwide.

An attorney for Moore, Mat Staver, said Moore issued the order because probate judges were asking questions about how to proceed. Staver said Moore will file a response within 30 days asking the Alabama Court of the Judiciary to dismiss charges against him.

Moore has been tossed once before from the office of chief justice. Thirteen years ago he refused to abide by a federal judge's order to remove a Ten Commandments monument Moore had erected in the rotunda of the state judicial building, resulting in judicial ethics charges and his removal by the Court of Judiciary.

During a news conference last week in that same rotunda, Moore said Starling and similar people would have been classified as having a "mental disorder" just a few years ago. Moore also accused Starling of performing a "mock wedding" in violation of a state court order against same-sex marriage, a claim Starling dismissed as untrue.

Describing himself as a churchgoing Christian who lives a normal life when not dressed in drag, Starling said he doesn't mind being singled out by Moore. Many more lesbians, gays, bi-sexual and transgender people also oppose Moore's tactics, Starling said, it's just that not everyone can speak out.

"I'll take the hit for the entire LGBT community if it gets the message across," Starling said.