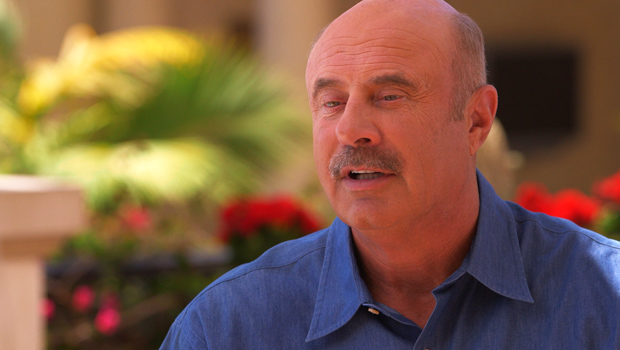 Forget the old saying that "The doctor is in." When it comes to one Ph.D. in psychology, it's more accurate to say THE DOCTOR IS ON ... on TV, that is. Tracy Smith profiles Dr. Phil:

After 14 seasons, the "Dr. Phil" show ("a safe place to talk about hard things") is still going great, fueled by enthusiastic audiences, an endless parade of troubled guests, and a host who knows how to put on a show.

"Somebody asked me one time, 'Dr. Phil, isn't what you do, a lot of it, just entertainment?' Clearly an attempt to be insulting. And my answer was, 'My God, I hope so!'" he told Smith. "If it isn't, they won't watch."

"You were drunk in a bar at 1:30 in the morning, fighting with a cop. That is not good mothering!"

And though Phil McGraw is not a medical doctor, he does have a Ph.D. in psychology, saw patients, and was a licensed psychologist for many years.

When asked what kind of therapist he was, McGraw replied, "I was very direct, just as I am now. I mean, I would tell people, 'Look, I can talk to you every week for six months, and tell you what I think at the end. Or I can just tell you right now.' You know, there was some guy in there, there was some arrogant a*****e with his wife. It doesn't take me six months to tell you that; I'll tell you today."

"Why in the hell did you, would you ever agree for your wife to become an escort?"

"And this really was the seed of the 'Dr. Phil' show, if you think about it," said Smith. "It's the same thing you're doing now."

"Well, you know, come on. Common sense is not common enough, is it?"

Phil McGraw first came to national attention in 1998 when, as a courtroom psychologist, he helped Oprah Winfrey win a lawsuit by Texas cattlemen.

Smith asked, "When you first went on 'Oprah,' did people immediately take to the tell-it-like-it-is Phil way?"

"Some took to it and thought, 'Wow, this guy is absolutely the second coming of common sense.' And some thought, 'This guy is an absolutely barbarian.' I agreed with both of them! I'm not for everybody. That's why you got a remote control."

After five years on "Oprah," Dr. Phil got a show of his own, drawing millions of fans -- and a few critics.

"Is part of your show's popularity that it is, for lack of a better term, a freak show?" asked Smith.

"Absolutely, unequivocally not. It's not even almost a freak show by any stretch of the imagination. And that is an absolute insult to the people that come on that show."

"So, you think the idea that people get off on seeing other people with problems is not really why people watch the show?"

"I absolutely know that's not why people watch the show."

"What do you think they're tuning in for?"

"We are delivering common-sense, usable information to peoples' living rooms every day for free," he said.

His own life story could, and has, filled several books -- the only son of an alcoholic salesman father who made life unpredictable, at best.

"I'm walking home with some friends, which was a rare thing for me. We're walking up the street. I get up there and it's my dad. He's in his underwear, laying on the driveway with his pillow. What do you do? You're embarrassed, of course."

"Were you angry?" Smith asked.

"You know, I was not. I can remember sitting back and looking at some of this stuff and thinking, 'These people are crazy.' I had to have been mixed up at the hospital."

"So, could your family have been guests on the 'Dr. Phil' show?"

"They could have been a season!" he laughed. "And they'll probably say the same thing about me."

The family Phil and and his wife, Robin, created -- sons Jay and Jordan, daughter-in-law Erica, and grandchildren London and Avery -- are frequent guests on "Dr. Phil," as proof positive that life is what you make it.

But Phil's tough-love approach doesn't apply to the grandkids. "I spoil them rotten," said Robin.

"Isn't that something that Dr. Phil would counsel against?" asked Smith.

"No, no, no. If they want popsicles for breakfast, go for it."

Seems like Grandpa Phil is a softer guy than the one Robin met as a teenager.

"I was just a little bit surprised that he was so quiet and so stern," she said. "So it was a challenge, Yes. I thought, 'Wow, you're not very nice!'"

She set the ground rules early on: "'I will never be your patient,'" Robin laughed. "'And don't ever try to be my doctor. If I need a shrink, I'll go to the Yellow Pages. I don't need you analyzing me and my behaviors.' And he went, 'Gotcha.' He's never done it since."

And there's another thing he won't do: play Scrabble with her. "I beat him every time!"

Dr. Phil's game is tennis. He had a court built in his yard, before his house was even finished, and he likes it much more than the other game so many doctors play.

And there you have it -- from a guy who knows his strengths and weaknesses, and always plays to win.

Tony Dow, known for role in "Leave It to Beaver," dead at 77
More
Thanks for reading CBS NEWS.
Create your free account or log in
for more features.
View CBS News In
CBS News App Open
Chrome Safari Continue
Be the first to know
Get browser notifications for breaking news, live events, and exclusive reporting.