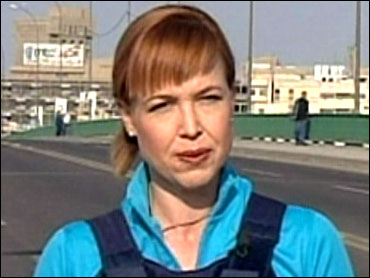 Injured CBS News correspondent Kimberly Dozier will remain at a military hospital in Germany for a few more days before returning to the United States.

Though Dozier had been looking forward to going home Sunday, wounded soldiers with more urgent needs had to be flown out before her.

In a statement on Monday, CBS said Dozier remains in critical but stable condition and that she "is doing well, all things considered." She is expected to be transported back to the United States in the next few days.

Dozier was critically injured May 29 and two CBS crew members, cameraman Paul Douglas and soundman James Brolan, were killed by a roadside bomb while filming a story in Baghdad.

CBS News producer Kate Rydell, who flew with Dozier from Baghdad to Landstuhl, Germany, reports that staying a little longer here will mean Dozier is in better condition for the flight.

Dozier underwent an operation Friday to repair her legs, which were injured in the blast.

On Saturday, Dozier was able to eat solid food for the first time since the blast. Her father fed her cream soup, orange juice and chocolate pudding.

When Dozier first arrived in Germany she could not talk or breathe and was immobile. Now she is sitting up, talking with her family, cracking jokes with her boyfriend and eating.

The coffins with the bodies of Brolan and Douglas were flown on Thursday from Kuwait to London's Heathrow Airport, where a ceremony was held with their families and close friends. Their arrival was honored in a simple, moving ceremony; their plain wooden coffins draped in the Union Jack.

On Thursday a young American soldier gave his Purple Heart to Dozier's brother, Michael, to give to Dozier. He told Michael that he wanted Kimberly to have it because, he said, she'd suffered as much as any soldier. That Purple Heart is now beside Kimberly's bed.