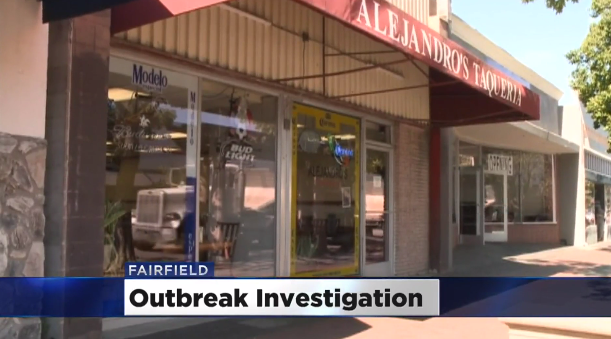 A popular Mexican restaurant in Fairfield, California is closed after health officials linked it to dozens of cases of reported food poisonings, CBS Sacramento reports.

"It became clear that a number of those people had eaten at Alejandro's restaurant, so that's when environmental health [investigators] went to the restaurant, took a lot of specimens and closed the restaurant," said Dr. Michael Stacey of the Solano County Department of Health.

Tests found they were sickened by campylobacteriosis, one of the most common forms of foodborne illness.

Customers who were sickened reported eating at Alejandro's between May 26 and May 29, but health officials say they're also concerned for a number of days before and after.

Doctors say most cases of campylobacteriosis is caused by eating raw or undercooked poultry or from cross-contamination of other food items.

Symptoms may include diarrhea, abdominal cramps and fever; the diarrhea may be bloody and may be accompanied by nausea and vomiting. Most people recover within a couple of days, but in rare cases, people with weakened immune systems may suffer severe illness.

Danny Hernandez, an employee of Alejandro's, said his uncle owns the taqueria and they're doing everything possible to make sure this doesn't happen again.

"We are good restaurant. Sorry this happened to you, hopefully it wasn't from us," he said.

"They will reopen again when we're sure that it's safe and there is no more bacteria there," Stacey said.

Some customers say they'll definitely be back, while others said the news might be too hard to swallow.

"My whole family comes here. When I want to a burrito this is where I would go, but thank God I was in the right place at the right time and I did not go," said a frequent customer, Beverly White.

The cause of the outbreak is under investigation.