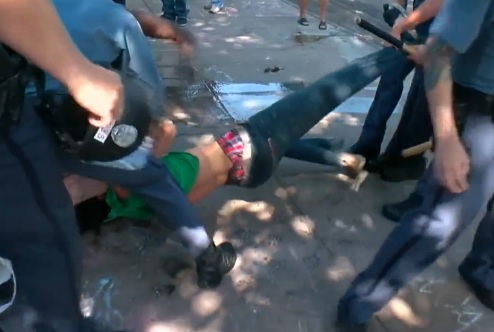 ST. PAUL, Minn. -- Police arrested dozens of people Tuesday while trying to reopen the street in front of the governor's mansion in St. Paul, where protesters have been demonstrating over the shooting death of a black man by a suburban police officer nearly three weeks ago.

Police tried several times to reopen the street, Linders said. One officer was treated for heat exhaustion, he said.

Police said they arrested another 23 people there early Wednesday for public nuisance and unlawful assembly. Those arrested were standing and sitting in the middle of the street, refusing to leave even after several dispersal orders, police added.

In all, about 70 protesters were arrested Tuesday and Wednesday morning on disorderly conduct, unlawful assembly and public nuisance charges, police said.

Demonstrators have been camping outside the governor's residence since July 7, a day after Philando Castile was shot and killed by a St. Anthony police officer during a traffic stop. Castile's girlfriend livestreamed the aftermath of his shooting on Facebook.

Protesters began gathering their belongings Tuesday morning after police told the group that they had to stop blocking the street.

Officers arrested three demonstrators on the sidewalk and another in the street around 11 a.m. after one allegedly removed a "No Parking" sign from a nearby curb, the Star Tribune reported.

Officers attempted to arrest the protester, but other demonstrator locked arms and formed a human chain. In response, police arrested a number of people, and video from the scene shows officers dragging protesters from the remains of the encampment, CBS Minnesota reported.

"We linked up in solidarity to tell them that we're not going to let them arrest him. And at that point they physically became abusive," protest organizer Curtis Avent said.

Minneapolis NAACP President Nekima Levy-Pounds accused police of a "show of military force against unarmed peaceful protesters," Minnesota Public Radio News reported. She said she would not tell people to stop the protest.

"I'm not telling the people to move. They deserve to be out here," Levy-Pounds said. "We don't need to be treated like animals and criminals when we're simply out here demanding justice for someone who didn't deserve to be killed."

Gov. Mark Dayton, who is in Philadelphia for the Democratic National Convention, has said protesters were welcome to stay outside his residence as long as they wanted. Dayton has suggested that race played a role in Castile's death.

Dayton was not involved in the decision to clear the street, spokesman Sam Fettig said Tuesday.

Officers began their action around 7:15 a.m. when protesters were found "sleeping in the street on blankets," Linders said.

Police had cleared the street before -- on July 18 -- but protesters went back into the road on Sunday.

The Minnesota Bureau of Criminal Apprehension is investigating Castile's death.