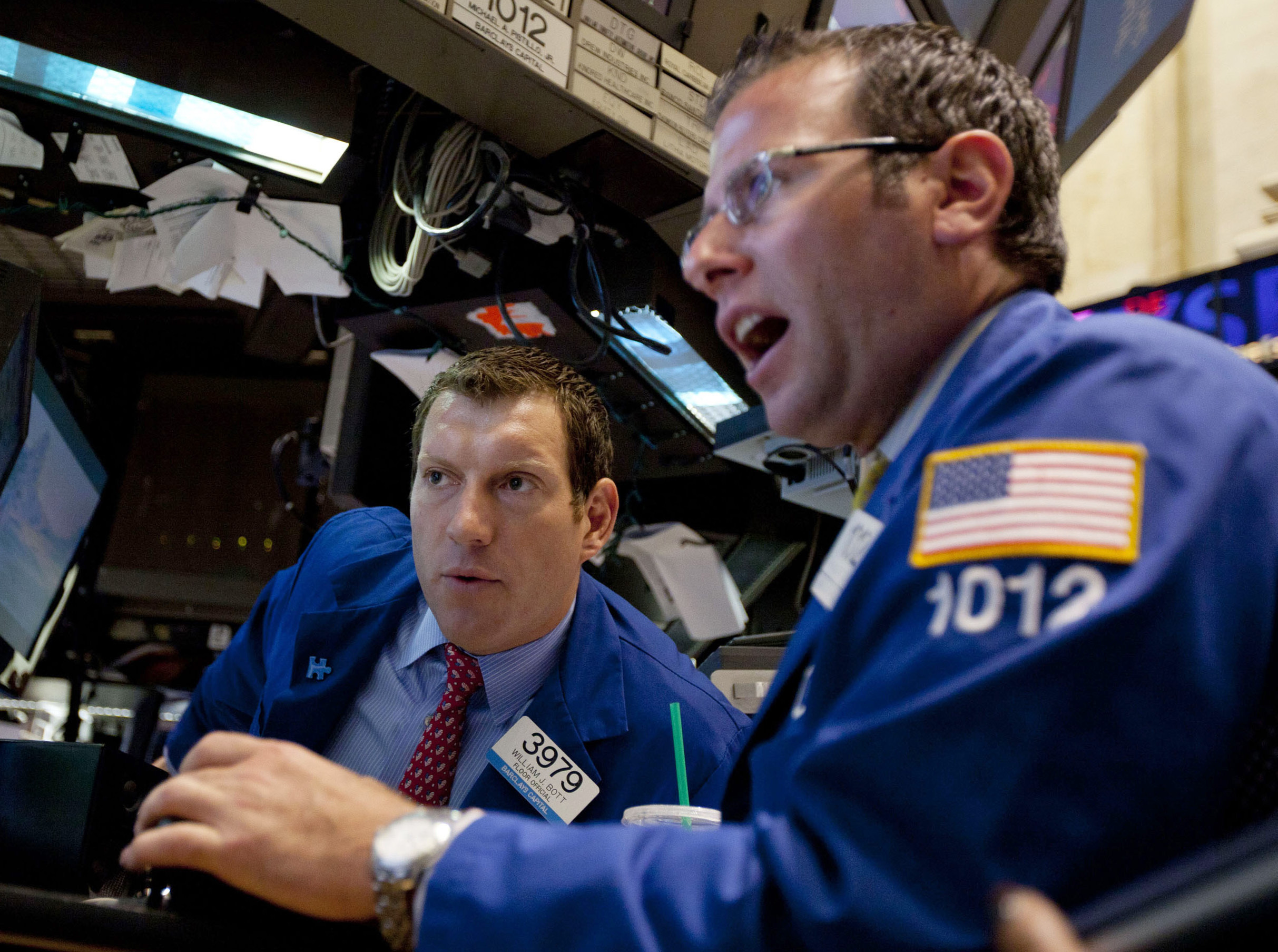 The Dow Jones industrials fell 634.76 points. It was the sixth worst point decline for the Dow in the last 112 years and the worst one-day drop since December 2008. Every stock in the Standard & Poor's 500 index declined Monday.

Investors worried about the slowing U.S. economy, escalating debt problems threatening Europe and the prospect that fear in the markets would reinforce itself, as it did during the financial crisis in the fall of 2008.

"`What's rocking the market is a growth scare," said Kathleen Gaffney, co-manager of the $20 billion Loomis Sayles bond fund. "The market is under a lot of stress that really has little to do with the downgrade." Instead, Gaffney said, investors are focused on "how Europe and the U.S. are going to work their way out of a high debt burden" if economic growth remains slow.

Investors desperately looked for safe places to put their money and settled on U.S. government debt — even though it was the target of the downgrade Friday, when S&P removed the United States from its list of the lowest-risk countries.

The price of Treasurys rose sharply, and yields, which move in the opposite direction from price, fell. The yield on the 10-year Treasury note fell to 2.34 percent from 2.57 percent Friday. That matches its low for the year, reached last week.

"This is largely a flight to safety," said Thomas Simons, money market economist with Jefferies & Co. "The bond market is really trading off of what's going on in the stock market." Money flowed out of stocks and into Treasurys.

Crude oil, natural gas and other commodities fell sharply on worries that a weaker global economy will mean less demand. Oil fell 6.4 percent to settle at $81.31 per barrel.

Fear is spreading quickly through the market, said Dimitre Genov, senior portfolio manager with Artio Global Investors. "It's becoming a vicious cycle and could feed into consumers reducing their demand as well."

Roben Farzad, a senior writer for Bloomberg Businessweek, said on "The Early Show" that investors should approach recent financial events by considering their long-term approach before panicking and pulling out of the market.

"Truth be told, if they need that money to keep the lights on, to pay the rent, they shouldn't be in the market, but if they are in this for the long haul ... then they should just stick to their plan," Farzad said. "We saw the last time a panic like this was felt in the spring of 2009, which was a generational low for stocks, a lot of people sold out and were kicking themselves a year later."

The Dow was down 5.5 percent at 10,809.85. The sharp drop extended Wall Street's almost uninterrupted decline since late July, when the Dow was flirting with 13,000. It fell below 11,000 for the first time since November.

In the U.S., stocks fell even as Moody's, another major credit rating agency, stood by its top rating of Aaa for the United States. It said it could downgrade the U.S. if it doesn't cut its deficit, "but it is early to conclude that such measures will not be forthcoming."

Financial markets also did not appear comforted by an afternoon statement by President Barack Obama, who said Washington needs more "common sense and compromise" to tame its debt.

"Markets will rise and fall," he said. "But this is the United States of America. No matter what some agency may say, we've always been and always will be a triple-A country."

S&P, in its downgrade, criticized dysfunction in the American political system. The downgrade wasn't a total surprise but came when investors were already feeling nervous about the U.S. economy and European debt, among other problems.

Last week, the Dow Jones industrial average fell almost 700 points. That was its biggest weekly point loss since October 2008, during the financial crisis. Counting Monday, the Dow has dropped in 10 of the last 12 trading days. It is down more than 1,900 points, or 15 percent, since July 21.

The Russell 2000 index of small stocks has now lost nearly 25 percent from its most recent high on April 29. A decline of 10 percent or more off recent highs is considered to be a correction. But a drop of 20 percent or more is said to be the start of a bear market.

The Nasdaq and S&P 500 are both down about 18 percent since the end of April. The Dow is down 16 percent.

S&P on Monday downgraded mortgage lenders Fannie Mae, Freddie Mac and other agencies linked to long-term U.S. debt. Fannie and Freddie own or guarantee about half of all U.S. mortgages. Their downgrade could eventually mean higher mortgage rates.

Worries about weaker profits that could result from a slowing economy have slammed the financial industry since late July. As a group, financial stocks in the S&P 500 index fell 10 percent on Monday to their lowest level since July 2009.

Bank of America plunged 20.3 percent, to $6.51, after AIG filed suit against the bank. The insurer alleged Bank of America sold it overvalued mortgage-backed securities. The bank denied the allegations. Its stock is down 51 percent this year, from $13.34.

Stocks in other industries whose profits are closely tied to the strength of the economy also fell sharply. Energy stocks in the S&P 500 fell 8.3 percent, for example.

The smallest losses came in safer industries such as consumer staples whose profits tend to be steadier, regardless of the economy. Even in a bad economy people will still buy things like toothpaste and bread.

The Vix index, a measure of fear among investors, shot up 47 percent to its highest level since May 2010. The index shows how worried investors are that the S&P 500 will drop over the next 30 days. It does this by measuring prices for stock options that investors can buy to help protect their portfolios.

Investors are also worried that Italy or Spain could become the next European countries to have trouble repaying its debts. Greece, Ireland and Portugal have already received bailout loans because of Europe's 21-month-old debt crisis.

The fears have pushed investors to shun Spanish and Italian bonds, which led to higher yields on the bonds. That resulted in even higher borrowing costs for the countries.

The European Central Bank stepped in Monday and bought bullions of euros worth of their bonds. The move helped to lower yields on Spanish and Italian bonds, at least temporarily.

Seeking to avert panic spreading across financial markets, the finance ministers and central bankers of the Group of 20 industrial and developing nations issued a joint statement Monday saying they were committed to taking all necessary measures to support financial stability and growth.

"We will remain in close contact throughout the coming weeks and cooperate as appropriate, ready to take action to ensure financial stability and liquidity in financial markets," they said.

Worries about the U.S. economic recovery have been building since the government said that economic growth was far weaker in the first half of 2011 than economists expected.

The economy grew at a 1.3 percent annual rate from April through June, below economists' expectations. It expanded at just a 0.4 percent rate in the first quarter. The first half of 2011 was the slowest since the end of the recession.

Then reports showed that the manufacturing and services industries barely grew in July. Job growth was better than economists expected last month. But the 117,000 jobs created in July were still well below the 215,000 that employers added in February, March and April, on average.

The Federal Reserve will meet on Tuesday, but economists don't expect much to come out of the meeting. The central bank's key interest rate is already at a record of nearly zero, where it has been since 2008.

The Fed has also already said that it plans to keep rates low for "an extended period." Chairman Ben Bernanke said last month that the Fed could step in to help the economy if it further weakened.

Fears about a weaker U.S. economy have overshadowed the profit growth that companies have reported for the second quarter. For the 441 companies in the S&P 500 that have already reported, earnings rose 12 percent in the second quarter from a year earlier. Revenue growth has also topped 10 percent for the first time in a year.

Verizon Communications Inc. fell 3.9 percent after it was unable to come to terms with 45,000 workers on health care costs, pensions and other issues.

More than 69 stocks fell for every one that rose on the New York Stock Exchange. Consolidated trading volume was heavy at 9.7 billion shares, nearly triple the volume in early July.