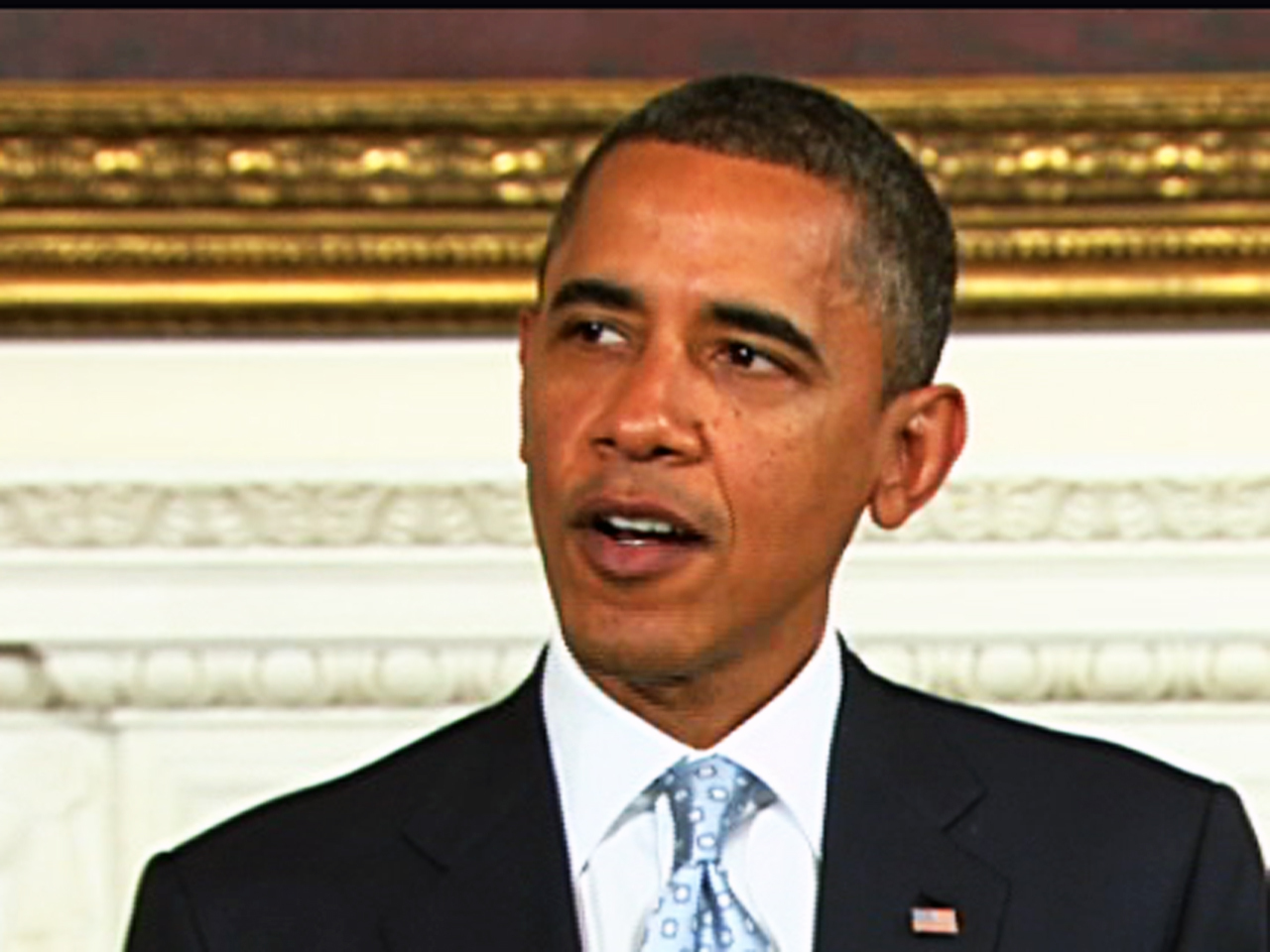 President Obama said Monday that America remains a "Triple-A country" despite the decision by ratings agency Standard & Poor's to downgrade U.S. debt in the wake of the fight over increasing the debt limit.

"Markets will rise and fall," he said. "But this is the United States of America. No matter what some agency may say, we have always been and always will be a Triple-A country." (watch his comments on the credit rating above.)

Mr. Obama's comments seemed designed in part to help soothe the wounded psyche of the nation in the wake of the downgrade, which has been followed by a worldwide stock sell-off. The Dow Jones Industrial Average fell more than 600 points Monday.

Downgrade puts new pressure on Congress to act
Who's to blame for the downgrade?
CBSNews.com special report: America's debt battle

"For all of the challenges that we face, we continue to have the best universities, some of the most productive workers, and the most innovative companies and the most adventurous entrepreneurs on earth, and what sets us apart is that we have always not just had the capacity, but the will to act," he said.

Mr. Obama quoted investor Warren Buffett's comment that if possible, he would give the United States a Quadruple-A rating, adding that "I and most of the world's investors agree."

But he went on to acknowledge: "That does not mean we don't have a problem."

Mr. Obama noted that S&P attributed its downgrade in part to doubts about the U.S. political system's ability to act to reign in the nation's ballooning deficit and debt, and called for a "balanced approach" to deficit reduction - one that includes both tax increases on high earners and "modest adjustments" to Medicare and other health care programs.

"Making these reforms doesn't require any radical steps," he said. "What it does require is commonsense and compromise."

The president pointed to proposals for such reforms from his failed negotiations with House Speaker John Boehner for a "grand bargain" deal to raise the debt ceiling, as well as proposals from the Senate's "Gang of Six" and other negotiations.

"It is not a lack of plans or policies that is the problem here," he said. "It is a lack of political will in Washington. It is the insistence on drawing lines in the sand. A refusal to put what is best for the country ahead of self-interest or party or ideology, and that is what we need to change."

The bipartisan committee to be formed as part of the deal to raise the debt limit has been tasked with coming up with at least $1.2 trillion in savings, and Mr. Obama said he hopes the downgrade will give their effort " a renewed sense of urgency." He said the committee will have the "full cooperation" of his administration and noted that he will present his own recommendations in the coming weeks.

The president also repeated his calls for Congress to extend the payroll tax cut as soon as possible and unemployment insurance benefits and to authorize infrastructure investment.

Mr. Obama closed his remarks by honoring the American men and women killed over the weekend after their helicopter was attacked in Afghanistan, saying they embody the best aspects of their country.

"We will press on, and we will succeed, but now is also a time to reflect on those we lost in the sacrifices of all who serve, as well as their families," he said. "These men and women put their lives on the line for the values that bind us together as a nation. They come from different places, and their backgrounds and beliefs reflect the rich diversity of America. But no matter what differences they might have as individuals, they serve this nation as a team. They meet their responsibilities together. And some of them, like the 30 Americans who were lost this weekend, give their lives for their country. Our responsibility is to make sure that their legacy is an America that reflects their courage, their commitment, and their sense of common purpose."

Below, CBS News' Anthony Mason and Norah O'Donnell discuss what Washington will do next following Mr. Obama's remarks:

Why It's Too Late to Sell Stocks
How Markets Have Responded to Past Sovereign Downgrades
Can the Fed Save Investors?
8 Reasons Why the Panic Is Misplaced
Treasuries Surge Upon S&P Downgrade