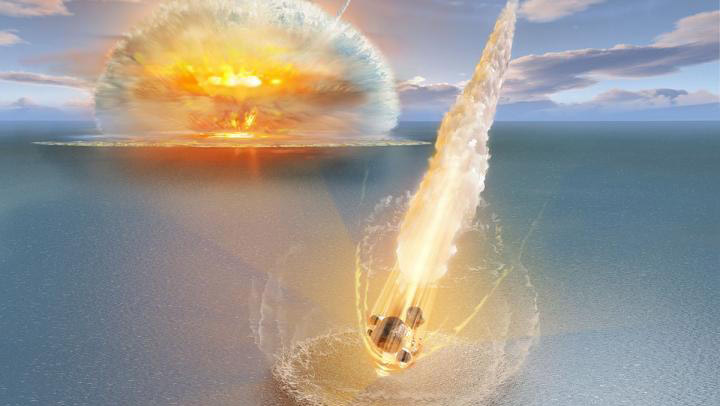 It's not altogether uncommon to hear about double rainbows, but what about a double meteor strike? It's a rare event, but researchers in Sweden recently found evidence that two meteors smacked into Earth at the same time, about 458 million years ago.

When the meteors slammed into Earth, Jämtland was just a seafloor, about 1,600 feet (500 meters) below the surface of the water. One of the craters left by the meteors is huge, measuring 4.7 miles (7.5 kilometers) across. The other, smaller crater -- which is only about 2,300 feet (700 m) across -- is located just 10 miles (16 km) from its larger neighbor. [Meteor Crater: Experience an Ancient Impact]

After analyzing information collected from a drilling operation, the researchers determined that the impact craters were formed at the same time. The information revealed identical geological sequences, or layers of rock, inside each crater. The sediment that accumulated inside the craters over the subsequent millennia also dates back to the same time, according to Sturkell.

"In other words, these are simultaneous impacts," Sturkell said in a statement. The meteors likely crashed to Earth following the collision of two large asteroids in the asteroid belt between Mars and Jupiter some 470 million years ago, he added.

When the meteors crashed into Earth, they displaced the water underneath them, leaving two huge, dry pits in the seabed for about 100 seconds, the researchers said.

"The water then rushed back in, bringing with it fragments from the meteorites mixed with material that had been ejected during the explosion and with the gigantic wave that tore away parts of the seabed," Sturkell said.

In the 1940s, quarry workers found an unusual red slab of limestone on Kinnekulle, a large hill in the county of Västergötland in southern Sweden. Researchers later identified the red rock as a meteorite. While large meteorites typically "explode and disintegrate" upon impact with the ground, small meteors fall to Earth as rocks, like the one embedded in the limestone slab, Sturkell said.

About 90 meteorites in total have been found on Kinnekulle in the past 15 years alone. But in Jämtland, where the dual meteor strikes occurred, researchers have only found small grains of chromite, a remnant of large, exploded meteors.