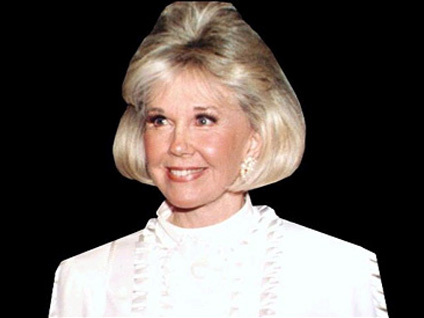 When life seemed so much simpler in America - a half century or so ago - Doris Day was America's sweetheart, the beloved "girl next door" and a huge recording and movie star.

"Doris Day is, to this day, the number one female box office star of all time, she's the only one who was number one for four years in a row," David A. Kaufman, author of a new biography about the star, told correspondent Jerry Bowen. "That was never true of Elizabeth Taylor, Greta Garbo, Katherine Hepburn, of anyone else!"

In the 1950s and '60s it was hard to find a movie magazine without her beaming face on the cover.

And her leading men came from the "A-list" of the day, says Kaufman, whose new unauthorized biography "Doris Day, The Untold Story Of The Girl Next Door," was released in June.

Add Frank Sinatra, Kirk Douglas and Jack Lemmon to the list, too.

But Doris Day's reality, like that of that long ago America, was more complex and in some ways darker than the bubbling, everything's coming up roses public image.

At the end of her career she not only left Hollywood. She stopped being Doris Day.

For nearly 30 years now she's lived near Carmel, California. She's an avid animal rights advocate nursing strays back to health on her small ranch. And she's known as "Clara" to most friends - a nickname given to her early in her career.

She's rarely seen in public and rarely heard except for one day each year.

On her birthday a local radio station plays the songs she made famous...and Doris and her alter ego, Clara call in to say thanks.

"Well, her first big hit was 'Sentimental Journey' which she recorded at the very end of the Second World War," Kaufman said. "And it became very popular for that reason with the, with the soldiers abroad who wanted to come home and with their wives here who wanted them home."

It was 1939 when a 17-year-old Doris Kappelhoff of Cincinnati, Ohio began her singing career with the big bands of that era. Her stage name became Day and she was off on the ride of her life.

But for all the success that would follow in song and film, she never found what she wanted most.

"The only thing she ever really wanted was to have a happy marriage and a happy family life," Kaufman said. "And it's the one thing she never had. She was married four times, but she was ultimately not happy with any of her husbands."

By the time she'd won acclaim for her first film, "Romance On The High Seas" in 1948, Day had been married and divorced twice and left with a baby boy. Her first husband beat her. Her second abandoned her.

At age 25 her search for Mr. Right had gone very wrong. But her film career was taking off. And her films were giving a boost to her recordings.

"'It's Magic,' which is in her first film, 'Romance On The High Seas' and then after that the next biggest song is 'Secret Love' from 'Calamity Jane.' And after that comes 'Que Sera, Sera,' which ends up being the biggest of all, of her entire career," said Kaufman.

"She had a lovely lullaby quality to her voice and I think everybody responds to that. And I think it's universal" said Haran.

Haran also wrote and produced a PBS documentary "Sentimental Journey." Now 17 years old, it features a rare interview in which Day reflected on her two decades of filmmaking - 39 films in all - and the one she liked most.

"'Calamity Jane' (was) probably my favorite movie," Day said in the interview. "Because that's the real me. But when I was a little girl I'd stumble. I loved climbing trees and you know skating and doing all the things that the boys did. Yet I loved dolls."

Her most popular film may have been "Pillow Talk," the first of three movies she did with Rock Hudson when both stars were number one at the box office.

Their on-screen chemistry was matched by a lifelong off screen friendship. Founded in part, said Kaufman, on the secret lives they shared, which included her troubled marriages and his homosexuality.

"I think, without ever discussing it, that they could relate to being basically the opposite to what their images suggested," said Kaufman. "For example the girl next door was not above having affairs...at least according to her alleged lovers...baseball player Maury Wills - which she denied - and Mickey Mantle, about which she was silent.

Behind-the-scenes for 17 years of her life was Marty Melcher, agent and husband number three. He tightly managed her career as their marriage quickly became a business relationship.

Day made the money and by accident or design Marty squandered it all. When Melcher died, Day learned her $23 million dollar fortune was actually a $400,000 debt.

"The Doris Day show," a situation comedy, saved her. It ran for five years on CBS and paid her legal bills as she fought her late husband's business partners to recover her losses. Eventually she won some of it back:

"I just knew that justice would prevail," Day said at the time. "I've known it all along."

By the early 1970s her career was largely over and her fourth marriage was failing. Despite offers she never took on another TV show until 1985 when she agreed to a cable show devoted to pets. It was called "Doris Day's Best Friends."

The appearance of her human best friend was sad and shocking.

Rock Hudson, gaunt and ghostly pale and gravely ill with AIDS was Day's guest. The illness had opened the door on his secret homosexuality. Hudson died two and a half months after appearing with Day. And she began her retreat from the public eye.

"She looks like Doris Day - a little older, but Doris Day. She still looks great," said actress Kaye Ballard, a long-time friend and occasional visitor to Day's Carmel Valley retreat. "She spends time making food for the animals. It's so funny, she has them on a vegetarian diet, and you know she really, she just adores her animals.'

Ballard was a regular on the old Doris Day show. She says her old friend doesn't always answer her phone calls - sometimes doesn't even answer the door. Most days she just wants to be left alone.

"I just think the disappointment she's had in marriages is what turned her off of people and turned her to animals," said Ballard. "And they never disappoint you."

Life may not have been perfect for the girl next door. There were quite a few bumps along the road.

But for Doris Kappelhoff from Cincinnati, Ohio, it's been a pretty amazing journey.