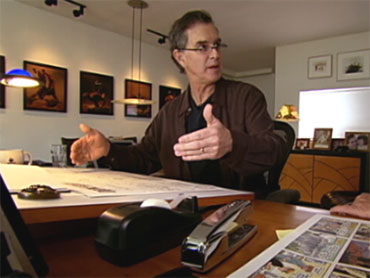 In 1970, the tumult that had engulfed so many college campuses for a decade reached even Ivy-covered Yale University.

But by then, a 22-year-old senior named Garry Trudeau had already begun to chronicle the steps and missteps of his generation, in just four panels a day. Before he graduated, the strip (now named "Doonesbury") became nationally syndicated - a comic strip utterly unlike anything seen in American newspapers.

It was sold, its creator recalls, as "dispatches from the front lines of the counterculture . . . reporting from the trenches, and that it had a kind of generational authenticity."

Now, 40 years later, a crowd at Yale has come not to protest, but to celebrate the 40 years of the strip. Some have come to buy a lavishly-illustrated, $100 Doonesbury Retrospective, a hefty bridge across a generation gap.

"I'm getting this book mostly for my parents, who are big fans," said one.

And they are here to attend a celebration of a Trudeau exhibit at Yale's Beinicke Library - a repository of rare books, like Shakespeare folios and an original Gutenberg Bible.

You can see that history in the strip's very beginning. "Bull Tales," as it was called back then, supposedly focused on a highly talented, utterly narcissistic star quarterback named "BD" - not so coincidentally, the initials of Yale star quarterback Brian Dowling - who has always treated the strip with grace and good humor.

"My 15 minutes of fame has lasted 40 years, so that's pretty good," Dowling said. 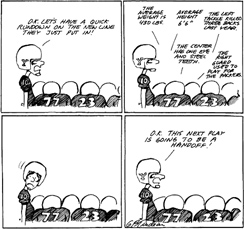 (Doonesbury.com)
But the strip was never really just about a football player. It was about characters like Mike Doonesbury, the clueless undergrad; Mark Slackmeyer, the radical, easily-ignored firebrand; Zonker, the ultimate slacker; Joanie Caucus, the emerging feminist; and Uncle Duke, who would over the years be in the thick of every imaginable scam all around the world.

"The story of this strip is watching the characters come of age," Trudeau said. "And now it's two generations who have come of age."

An older generation of publishers recoiled at the idea of politics - especially Trudeau's unabashedly liberal politics - on the comics page, not to mention the sight of an unmarried couple . . . in bed!

He despaired, only to be encouraged by his syndicator over a dinner:

"He kind of leaned back and looked over the rim of his martini glass," Trudeau recalled, "and he said, 'Don't worry, these guys die.'

"And damned if he wasn't right!" he laughed. "As three years unfolded, people began saying, 'Well, maybe there is room on the comics page for a strip about all the things that my generation was concerned about: politics, rock and roll, sex, drugs, and particularly war."

In 1983, at the top of his game, Trudeau took a 20-month sabbatical. When he returned to the strip, Trudeau expelled his characters from the timeless college setting:

"I had the strip lurch into real time," Trudeau said. "And all the characters are thrown out into the real world. And as they're talking about their lives, you realize that almost none of them are gainfully employed, have any security in their lives, have stable relationship.

"That's just the horrible things that writers do to their characters," he said.

This is decidedly not a case of art imitating life. Trudeau's professional successes include a Pulitzer Prize; a Broadway show; an animated special; and more than 50 collections that have sold 7 million copies worldwide.

On the home front, he has been married for 30 years to Jane Pauley.

Tom Brokaw had introduced them:

"And it totally took," Pauley said. "I think he married me because I was a girlfriend that was so low maintenance that we could have a date, I went home, and he could go back to work."

And the fact that both earned great success at an early age helped cement the bond:

"If anything, that's maybe what attracted Garry to me," Pauley said, "is that I appeared not to have been, you know, any more taken with the fame thing than he was." 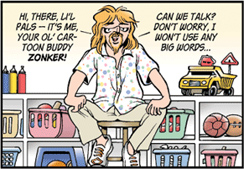 (Doonesbury.com)
Another clue to "Doonesbury"'s long life is how the look of the comic has changed.

"He kind of earned a reputation as beings a bad cartoonist in the first years of his career," said Brian Walker, who (like his father, Mort Walker, is a cartoonist.

He works on "Beetle Bailey" and "Hi and Lois," and has authored a new examination of Garry Trudeau's art.

"He wanted to experiment with other styles," Walker said, "started using more close-ups and silhouettes."

Nowhere was Trudeau's artistic reach on bolder display than when he put "BD" into the Iraq war - and into a firefight that led to an utterly unexpected image:

"So he gets him on a stretcher, and they're moving toward the chopper," Trudeau said. "On the third day we pull back and see that he's missing a leg. We also see he's missing his helmet which is the first time in 36 years he's been without it."

Determined not to exploit or to trivialize the story, he began to spend time at VA hospitals, listening to fighting men and women . . . something he talked about in his remarks at Yale:

"I worry I might not be getting it right," he said. "It is important to me that both the wounded and their caregivers understand that BD's story is not told at their expense but is told in their honor."

As for the strip, most of his original players are in their early 60s now. But will Trudeau ever take the step of writing the last, final - terminal chapter of their lives?

"I have a feeling that newspapers, the industry I am a part of, may go off a cliff before my characters do!" he laughed.

Which would still leave a remarkable legacy for a simple comic strip.